Most Promising Actors Of The Year For 2015

Vote now for who you think should be the Most Promising Actor Of The Year for 2015! If you feel that you or someone you know deserves to be a featured as one of the Most Promising Actors Of The Month then let our talent coordinator know by emailing lex@starcentralmag.com and we’ll get back to you as soon as we can! Please keep it in mind that any person who leaves negative, unpleasant and unnecessarily rude or derogative comments will be removed and banned from this site permanently. This is not a page where you can post your rants – we will ONLY approve comments that are constructive to the nominees. Let’s just keep this voting poll fair and fun!

Grayson Matthews is an actor who has not had professional training in the past but has climbed the ladder through ‘Hard grafting’ anyway. He grew up in St Austell Cornwall but he is currently living in Bath, he has been acting for just over two years now.  Before he got into acting, he was a trained fire fighter, however, circumstances in his life changed and he ended up leaving the brigade.  Acting has always been a passion of his.  Years ago he would have not believed he would have gotten as far as he had in the little time that he has been acting. He has played main and leading roles in various independent films as well as having a featured role alongside Henry Cavill and Hugh Grant in The Man From UNCLE feature film. 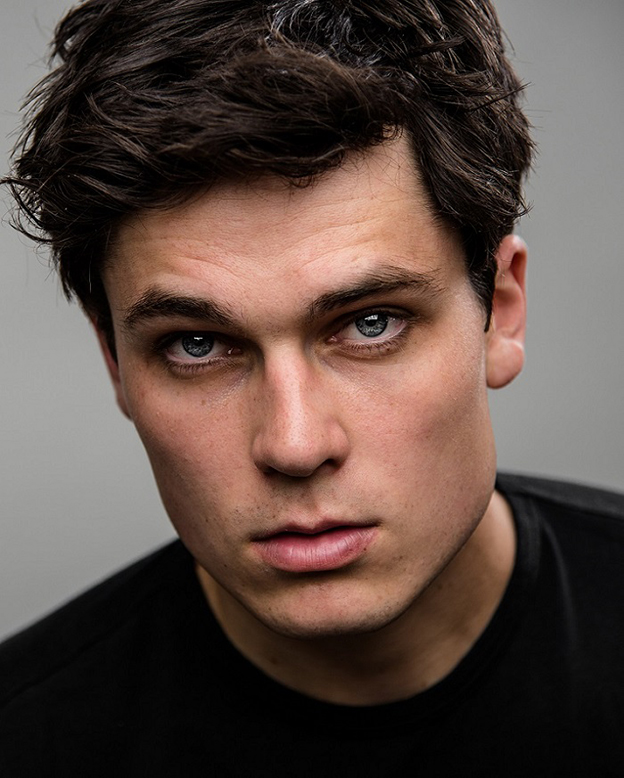 Samuel Woodhams moved to London in September 2014 to kick off his acting career despite growing up just south of London in East Sussex – he believed that having instant access to auditions and performances would make all the difference. He’s made some great progress this past year, despite some difficult personal circumstances, he was still involved in some great productions. Highlights include taking the lead in Dorian Gray at the King’s Head Theatre, flying to Istanbul to shoot the short film ‘Basur’ by Nehir Tuna, igniting his love for comedy in the short film ‘Drug CV’ and taking the lead in a dark and very fun shoot for Bryan Ferry’s single ‘Loop De Li’. 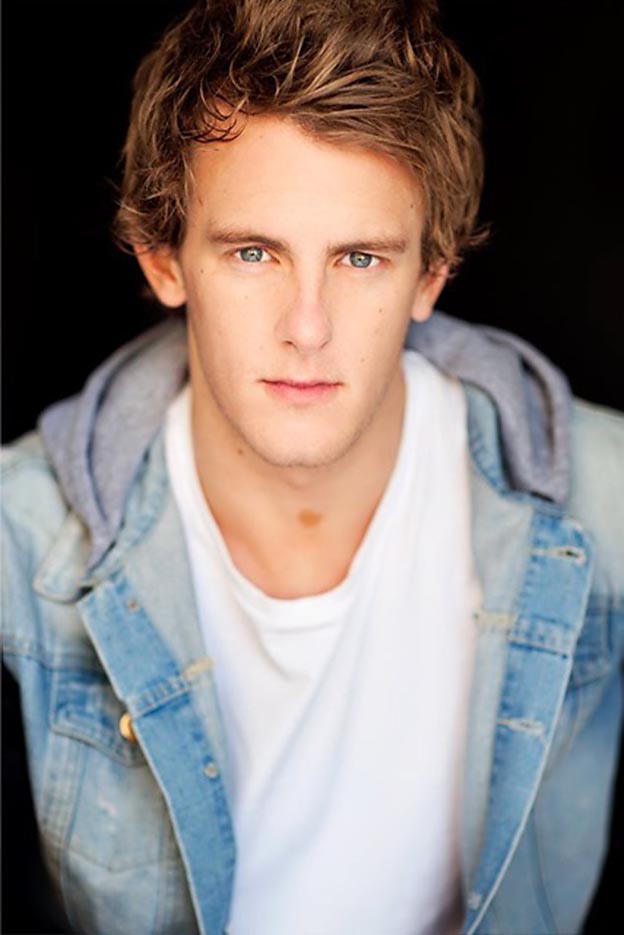 Zayn recently graduated from Screenwise which is Australia’s leading film and TV school for actors. He completed the two year full time Diploma Of Screen acting, studying under some of Australia’s finest industry professionals. He has been active within the acting world since 2012 and have since performed in several short films such as A Gathering, Voyeur, The Gifted, and Mover as well as web series such as Waiters. Alongside acting he’s also a keen writer. He has developed a production house which has produced the web series “Roomies” and the short films “Milk” and “Beings” and they are now in the development process of their first feature film called “After Alice.” 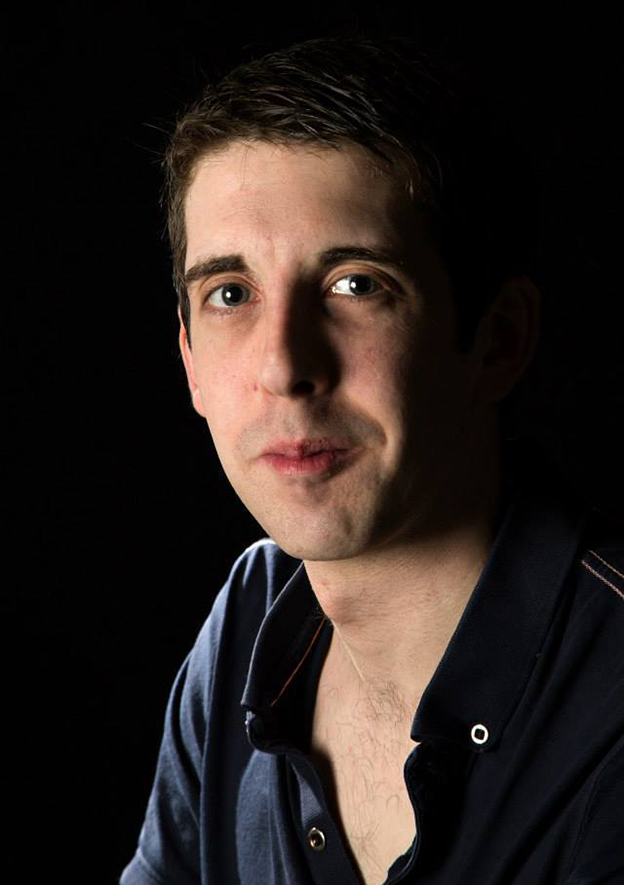 Born in Birmingham, United Kingdom, Jamie first became involved with acting in school but lost touch after leaving. Having always wanted to become a professional actor and make acting his full time career, Jamie withdrew from the rat-race of uninspiring jobs in 2013 and began to make his dream a reality. Since then, Jamie has gone on to work on a number of films and TV programs in both leading and supporting roles. From his first role on Dominic Burn’s war film ‘Allies’ and BBC’s regular daytime slot ‘Doctors’, to supporting roles as Doctor Andrew Blakeman on Alex Gilbert’s ‘Where Demons Hide’ and Sam in Jordan Linesworth’s ’60 Days of Honesty’, Jamie has proven his versatility as a method and character actor. Jamie was recently named in the leading role of Jason Bell in James Hastings’ psychological thriller, ‘White Dreams’ and as Lieutenant Ellis Dean in Alex Birch’s true war epic, ‘The 13th’ alongside Mark Moraghan. 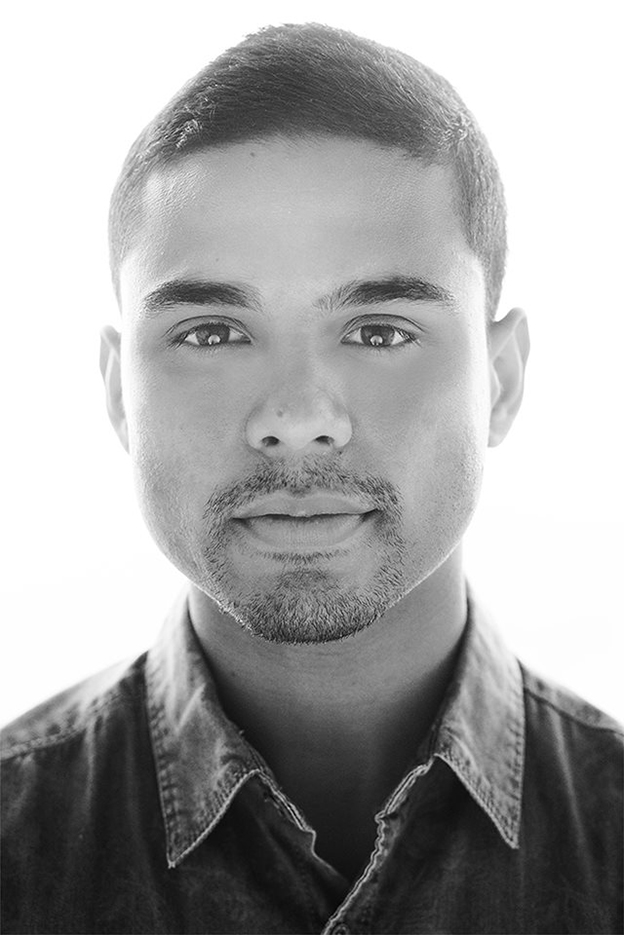 Naveen couldn’t call himself an actor six months ago, because he wasn’t a 100% committed to making it as an actor. The reason being was because he was afraid of failing and he was also afraid that he wasn’t good enough. What he eventually realised was that our time is limited; we could die tomorrow or in 10 years’ time so he asked himself “if today was my last day what would I love to do?” One of the answers to that question was acting because it’s something that he loves to do. So he made a decision to commit himself a 110% and he was fortunate enough to secure lead roles in eight short films (Humbug, Righteous Red, The Girl Last Night, Delirium, Watercolour, Mime Club, Invasion), a web series (Dead Friends Project), a feature film (Pacific Theatre)  and a music video within six months. What he eventually realised was that there is nothing stopping him from being the best he can be. 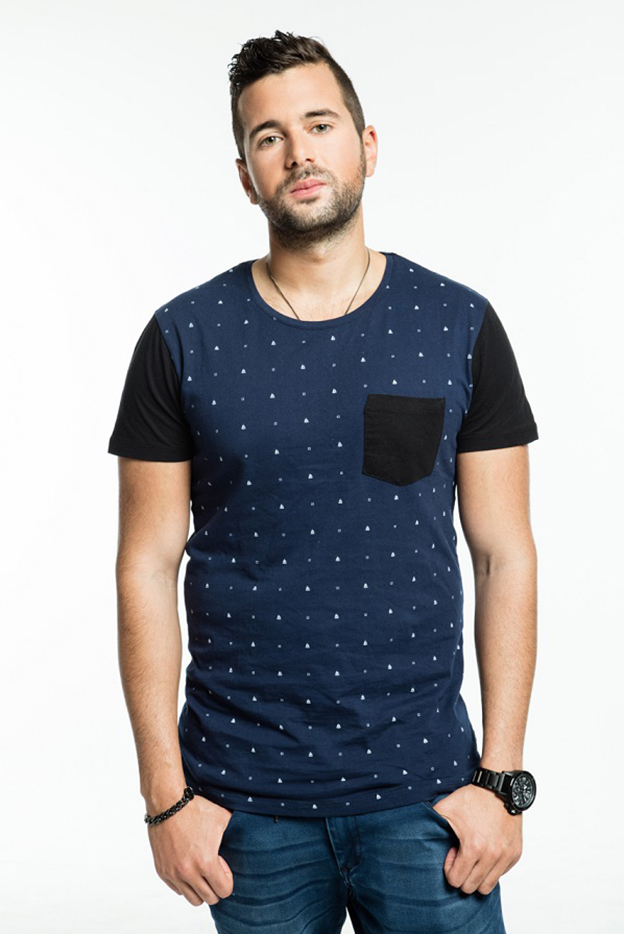 Mikey has always had a passion to work in TV, but it wasn’t until recently while he was working at the family business that he’s had the opportunity to pursue his dream. Working for his family has given him the availability needed to attend castings and accept overseas television work. He has appeared in various Australian TV dramas such as Home and Away, Wonderland, Rake, Killing Fields and Love Child as well as featured TV dramas such as “The Code” and “Australia: The Story Of Us.” In the last 12 months he has appeared in 2 international TV shows, one airing in Asia in January and the other all throughout Europe in February, and he’s currently on hold for another 2 TV shows. He has also just scored a role as a featured character in an upcoming sci-fi drama alongside Kellan Lutz. 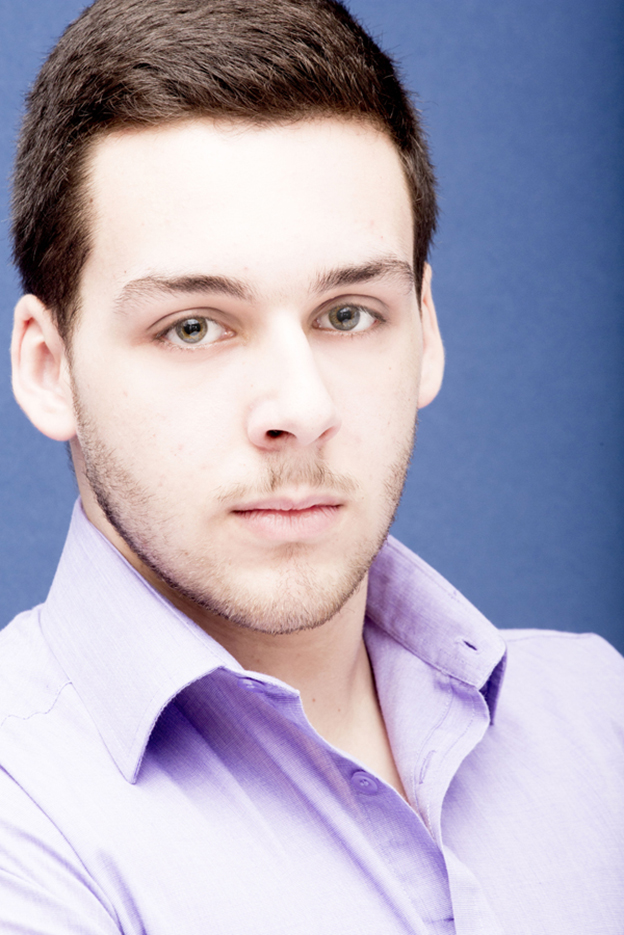 Bernardo Santos is a 19 year old actor who hails from London. He was originally born in Lisbon, Portugal so his family is Portuguese. He speaks Portuguese, English and Spanish fluently. He has been acting for a few years now, he has attended various acting schools where they performed, danced and sang. Since then he has been on various feature films such as Under My Skin, The Hand Of The Creator, Axilas and Hard & Soft, short films such as Black Shadow, The Road To El Dorado and Watch Not, music videos such as Broken Bond, Shower and Christmas Everyday, TV commercials, theatre productions and dance productions. 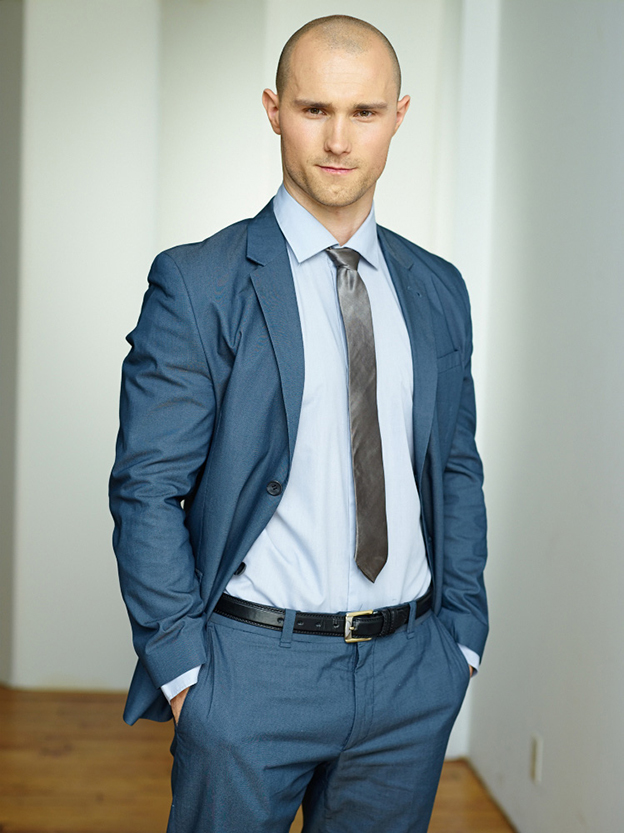 Danijel is a Croatian actor living and working out of Toronto, Canada. He has never given up on his dream as an actor and he’s still at it 17 years later. Despite all the rejections and countless auditions in the early beginnings, he has shown that giving up is not an option. He played a character named “Petar Tomasic” who’s father was murdered and then in an later episode comes back for revenge in the television show called “Flashpoint”, he played a bad guy named “Dimitri” going after Frank in Transporter The Series, he played a Russian body guard guarding the Russian president in Nikita The Series and he also played a character called Machete Scavenger in a post apocalyptic world going after revenge in Killjoys The Series. His latest project is a feature film called “Cold Deck”, he plays Bill – a mercenary hired by a crazy man played by Robert Knepper to go after some good guys. Lately in New Zealand Danijel has also done a few short films one of which was for New Zealand’s Director Jonathan King called “Wrong House” and another with a very talented Visual Effects team called “Codex” where he plays an interplanetary gun for hire trying to retrieve a special kind of stone. Danijel is eager to make his mark in the industry. The size of project never mattered, it was the journey the characters took that Danijel was after. Next stop is Australia where he hopes to do some more work with local and possibly international productions.

Vote for who you think should be the “Most Promising Actor Of The Year” in the poll below! The winner will appear in our website and will be featured in our magazine. The poll closes on the 4th of February, 2016 at 12am AEST (Sydney, Australia time) and you are eligible to vote only once per day (after you’ve voted, 24 hours must pass after the time you voted, for you to be able to see the voting form and vote again the next day). Please note that voting is also restricted to just ONE vote per IP address. Vote NOW and make your voice heard! 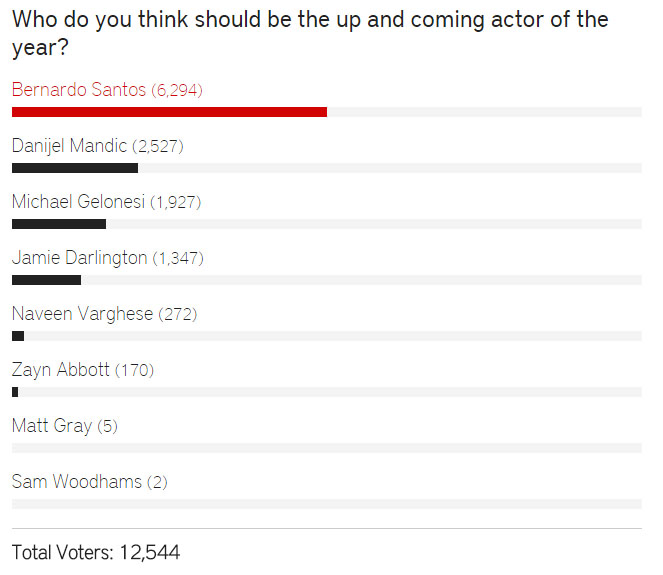