Most Promising Actresses Of The Month – September 2014 Edition

Vote now for who you think should be the Most Promising Actress Of The Month for September 2014! If you feel that you or someone you know deserves to be a featured as one of the Most Promising Actresses Of The Month then let our talent coordinator know by emailing lex@starcentralmag.com and we’ll get back to you as soon as we can! Please keep it in mind that any person who leaves negative, unpleasant and unnecessarily rude or derogative comments will be removed and banned from this site permanently. This is not a page where you can post your rants – we will ONLY approve comments that are constructive to the nominees. Let’s just keep this voting poll fair and fun! Katerina was born in the tiny little country in Europe. She has always wanted to be an actress but eventually she ended up abandoning her dream and she decided to obtain a university degree in Marketing. However, there was always this tiny little voice inside of her that still wanted her to pursue acting as a profession though. She initially had doubts about her ability, until one day she just conquered her fears and she stepped out of her comfort zone – she decided to enrol in film acting courses in New Zealand. To date she feels that this was the best thing that she has ever done in her life! Acting made her whole, and whenever she’s on set she feels like everything is right and everything is as it should – she feels fulfilled. So far she has appeared in a web series called ‘Seasons of change,’ she has appeared in a Durex spec ad, she has also appeared in a TV series called ‘Happy Hour’ as well as a number of short films such as ‘The Stamp’, ‘Kiwi meat’ and ‘The Trust.’ Currently she is working on a short movie project called ‘Naught left but a memory’. She feels humbled that she’s able to do what she loves most and she’s grateful that she gets to feel, see, smell, hear and taste acting on a constant basis. Mackenzie grew up with eight siblings and acting became ‘her thing’ very early on – she would constantly tell everyone she met that one day she would be in a movie. Having a very loud and bubbly personality when she was younger made it very easy for her to get involved in the performing arts at school as well as through youth programs which only enhanced her enthusiasm for performing. She became very fascinated with exploring other characters and finding their qualities within herself. In her final years of high school she performed as Maid Marion in ‘The Tale of Robin Hood’, Joan in ’St Joan’ as a solo performance and many others. She also began doing amateur work outside of school which included a role in the independent feature film ‘The Water Stinger’ and working with Federation Square in their video advertisements. After graduating she decided to take the risk and pursue acting as her career. As well as studying her craft she has appeared in a number of short films such as ‘Final Pact’, ‘Nature Wins Out’ and ‘Bye Polar’ (directed by Luci Schroder). Most recently she has performed at The Malthouse Theatre in ‘The Vagina Monologues’ and appeared in Vance Joy’s music video for ‘Mess is Mine’. She continues to audition regularly and hopes to further study acting internationally. Ashlee Polidano is a 21 year old actress who hails from the beautiful city of Melbourne. She comes from a European background and she has always been taught the value of hard work and the rewards that working hard for what you want brings. She’s one who constantly looks to improve herself, not only as an actress, but also as a person. She loves going out and meeting new people and gaining new experiences which she can then apply to her craft. Although she loves all aspects of performance, her heart has always been drawn to the stage and theatre. She previously had a supporting lead role in an independent play called ‘Oblivious’ which was a spoof of the movie ‘clueless’ where she played the lead characters’ best friend Natalie. She also played the lead role of Cat Woman in another independent play called ‘Riddle Me This’ which was a play based on the DC comic books of Batman and the Riddler. Ashlee is a passionate actress who is always willing to learn and who is not afraid to put in a lot of hard work along the way. Rebecca is a passionate and driven actress who is based in Perth, Western Australia. She moved to Perth at the age of sixteen from the Western Australian country to broaden her acting opportunities. She attended John Curtin College of the Arts in Fremantle and graduated second in her class two years later. She is determined to follow her passion and love for acting anywhere, hence the reason why she is moving to Sydney in February 2015. She loves film, television and theatre acting, and she is currently building her experience progressively in Perth. So far she has appeared in various theatre shows such as ‘Born Bad’, ‘Voices 2013’, ‘Gargantua’, ‘Sweet Bird of Youth’, ‘Twelfth Night’ and ‘Alice in Wonderland’ and she has also played the lead role in various films such as ‘The Morning After’, ‘Aeternum’, ‘Virtual Reality’, ‘Bugs’, Opportunity, Through Indigo Eyes, Cake, Anyone?’ and ‘Dreams.

Vote for who you think should be the “Most Promising Actress Of The Month” in the poll below! The winner will appear in our website and will be featured in our magazine. The poll closes on the 30th of September, 2014 at 1am AEST (Sydney, Australia time) and you are eligible to vote only once per day (after you’ve voted, 24 hours must pass after the time you voted, for you to be able to see the voting form and vote again the next day). Please note that voting is also restricted to just ONE vote per IP address. Vote NOW and make your voice heard! 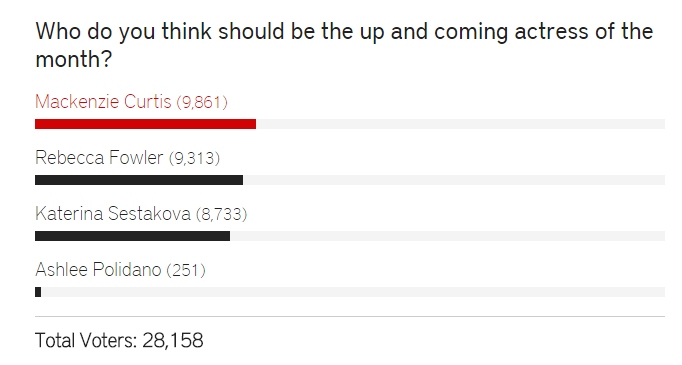