Most Promising Actresses Of The Month – July 2015 Edition

Vote now for who you think should be the Most Promising Actress Of The Month for July 2015! If you feel that you or someone you know deserves to be a featured as one of the Most Promising Actresses Of The Month then let our talent coordinator know by emailing lex@starcentralmag.com and we’ll get back to you as soon as we can! Please keep it in mind that any person who leaves negative, unpleasant and unnecessarily rude or derogative comments will be removed and banned from this site permanently. This is not a page where you can post your rants – we will ONLY approve comments that are constructive to the nominees. Let’s just keep this voting poll fair and fun! 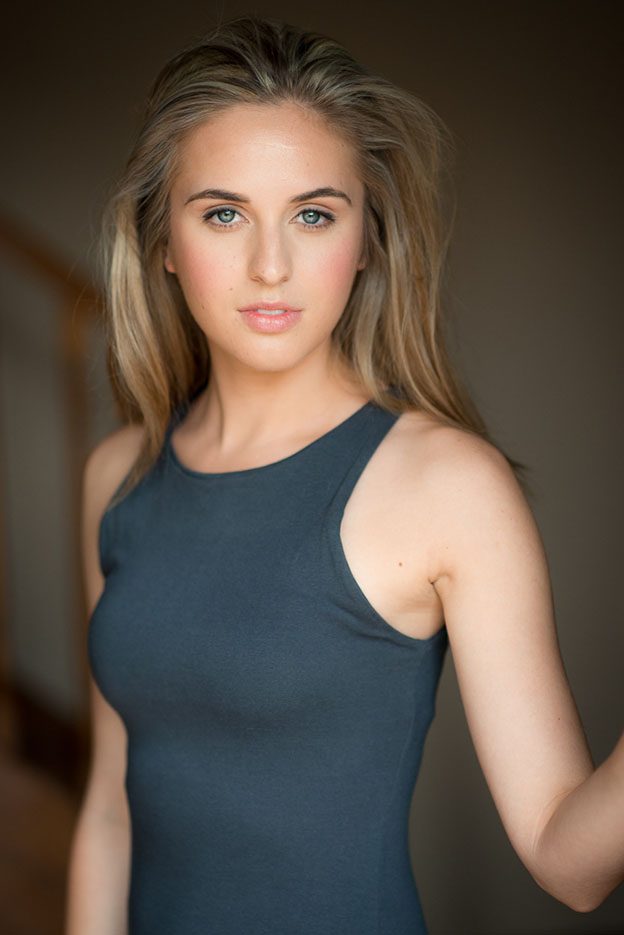 Milica first got into acting when she was just thirteen. She remembers forcing her parents to drive her for an hour to the city so that they can drop her off in her Drama classes. That love for acting was the main reason why she ended up dropping out of her first semester of Journalism at University to pursue acting. Since graduating , she has been very fortunate to star in her first movie called “Maha Maha” which aired in the local cinema this year – she played an Australian girl who fell in love with the Tamil culture.  She also played lead in other short films such as ‘The Evil Within’, ‘Angel’ and ‘Endure’. 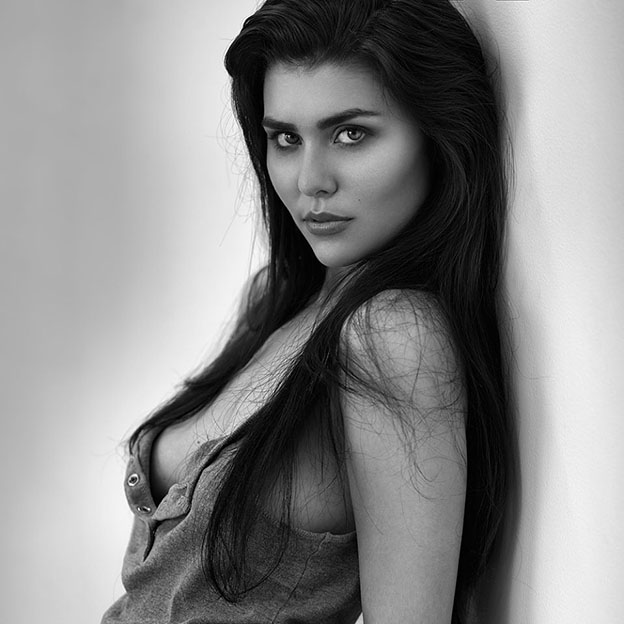 Asleen Mauthoor is a 21-year-old Melbourne actress with an Irish-Mauritian background. She is classically trained in theatre, having studied acting and drama throughout high school and university, but has made the transition into film and television. She has just completed her BA in English and Drama, and is now dedicating 2015 to her acting career.  Asleen is soon to appear in the upcoming Channel 31 TV series called “Fix-Her-Up” as one of the leads, Nicki, and she has also just recently joined an educational theatre company. She has appeared in a number of short films such as “Static” and “Monster”  and she has numerous short films in the works. She also plans to travel to Los Angeles on a working holiday in the near future. 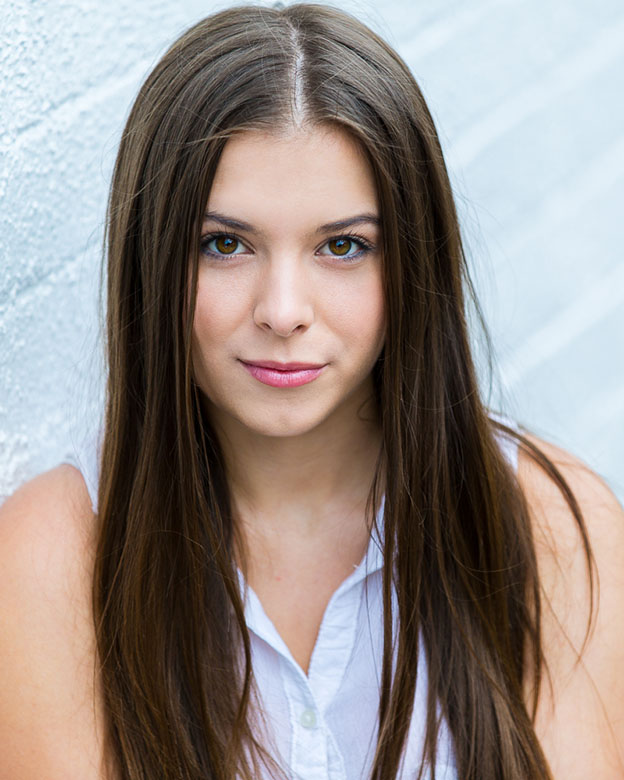 Lisa Marie Shaw is an animal loving, thrill seeking chocolate enthusiast. She has played roles from the smartest sweetheart to a murderous psychopath to a supernatural being.  After working on several films such as “Not Another Love Story”, “The Gathering”, “Hide No Evil” and Channel 11’s Neighbours, Lisa Marie now has her eyes on the United States, her dream role consists of an epic love story, supernatural powers and a kick ass production team. When she is not working , she could just lay in a pen of puppies and kittens all day. She enjoys nature, movie nights and passionate people who are changing the world. 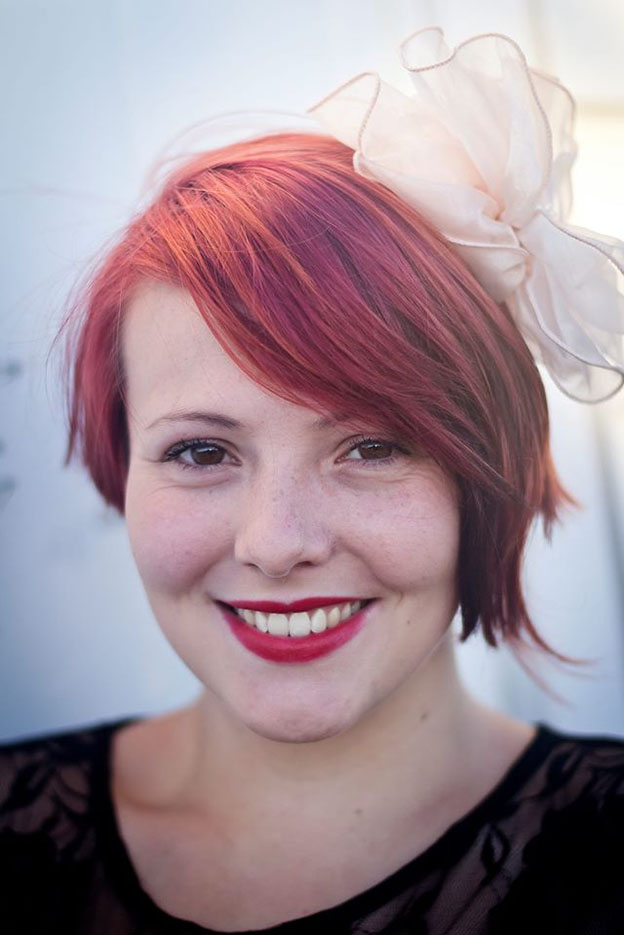 Audrey Cadzow is an Australian stage and screen actress with over a decade of training. She has recently been cast in a number of upcoming feature films including “Sangre” (currently in pre-production) and an indie drama called “My Reprisal”. She is a talented singer who is capable of speaking in a variety of dialects and accents with ease. Audrey has starred in a number of short films and boasts an impressive resume of theatre experience. She starred as the lead in “The Icarus Chronicles” and has performed in “Julius Caesar,” “The Well”, “A Midsummer night’s Dream”, and “Hunchback Of Nostradamus.” She has completed an Advanced Diploma of Screen and Stage Acting at the Brisbane Actors Conservatory. Keen to learn as much about the industry as she can, Audrey has taken on behind-the-scenes roles including lighting, hair and makeup, script development, prop building and set design. A multi-talented artist, Audrey is enjoying the journey as she slowly but surely climbs her way to the top.

Vote for who you think should be the “Most Promising Actress Of The Month” in the poll below! The winner will appear in our website and will be featured in our magazine. The poll closes on the 31st of July, 2015 at 12am AEST (Sydney, Australia time) and you are eligible to vote only once per day (after you’ve voted, 24 hours must pass after the time you voted, for you to be able to see the voting form and vote again the next day). Please note that voting is also restricted to just ONE vote per IP address. Vote NOW and make your voice heard! 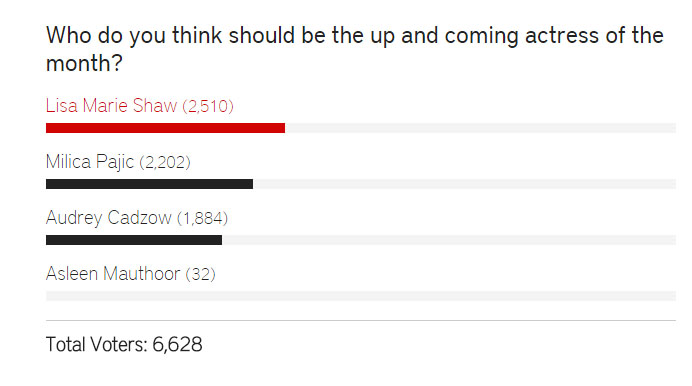 Read More
Vote now for who you think should be the female actress of the month for June 2013! If you feel that…
Read More
0
0
0

Read More
Vote now for who you think should be the Most Promising Actress Of The Month for May 2017! If…
Read More
0
0
0

Read More
Vote now for who you think should be the Up and coming female actress of the month for August 2013! If…
Read More
0
0
0