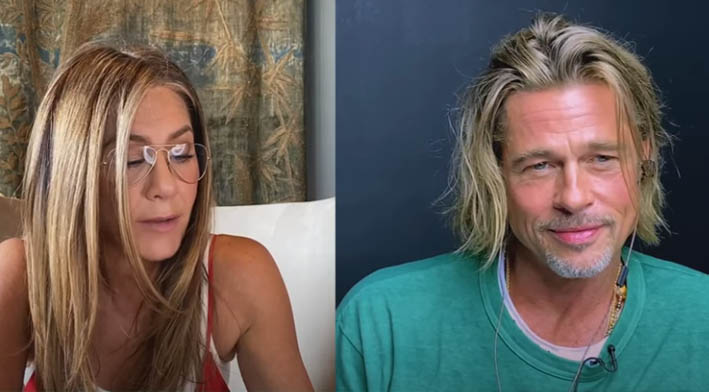 Former husband and wife Brad Pitt and Jennifer Aniston recently reunited via Zoom to read a scene from Fast Times at Ridgemont High and the much-anticipated reunion got fans super excited.
The Fast Times at Ridgemont High table read included a number of stars from the original movie such as Sean Penn and Matthew McConaughey, and they teamed up with several A-list actors such as Morgan Freeman, Julia Roberts, Shia LeBeouf, John Legend, Jimmy Kimmel, Ray Liotta, Henry Golding, and Dane Cook to read specific lines from scenes from the once super popular high school movie. The table read was established to raise money for CORE Response.
The former couple has now been divorced for 15 years but they both still looked pretty friendly over Zoom. The scene they were reading together revolves around Linda Barrett which was originally portrayed by Phoebe Cates – she walked in on Brad Hamilton while he was imagining her topless and the scene made everyone around Brad and Jen giggle. Check out the reading below (Screenshot from CORE):
Total
2
Shares
Share 2
Tweet 0
Pin it 0
Share 0