Meet The Man Behind The August 2020 Issue Of StarCentral Magazine: d.E. Rogers 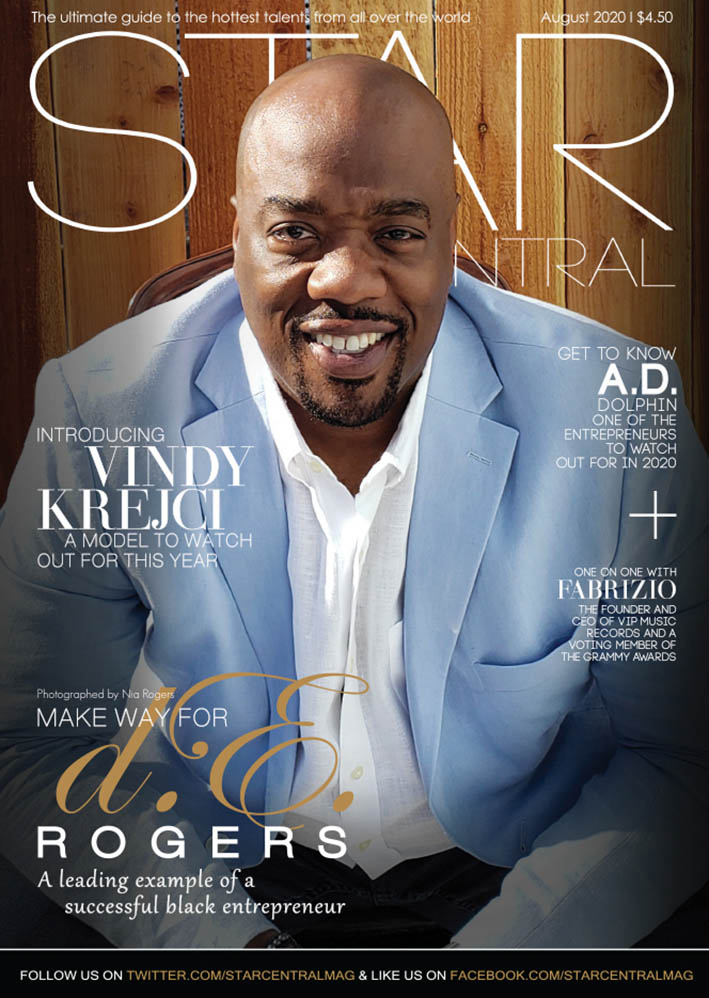 In today’s racially charged climate, d. E. Rogers has definitely come a long way to overcome racism and to excel in his field as an author and become a leading example of a successful black entrepreneur. As protests against racism and police brutality continue all over the world, his mission is to empower the black community through many different mediums but in particular, through his books and screenplays. By becoming an influential writer, he continues to inspire thousands of people that are of African American heritage and support the next generation of black entrepreneurs striving to make it big.

The lives of black people in America have always been filled with challenges and obstacles to be overcome. Unlike any other race, d. E. Rogers believes that the roadblocks black people have faced throughout the years have been long and damaging to the mind and soul. The same way generational wealth creates access and elitism, generational poverty, and pain creates hopelessness and closed doors.

He further believes that after over 400 years of living in America, black people have spent most of their time living the American Nightmare while others have been living the American dream. The 2nd, 3rd, and 4th class citizen statuses are a slap in the face. Just like the “go back to Africa” chants, but through it all, black people have survived and stood tall. They may bend at times, but they have never been broken. Their spirit of a great tomorrow has never wavered, but as the whole world reflects on black treatment, stereotypes, police brutality, and inequality, they can no longer silently wait for tomorrow. Today is their rally call for real change. Through all the suppressing years of slavery and thereafter, black people have glimpsed what their greatness could be. Creating technology, innovations in medicine, and becoming superior in creativity and athleticism to name a few, they have shown the world their true power, but despite this, d. E. Rogers feels that the world still wants to suppress black people.

When you see that rose crushing through the concrete, d. E. Rogers wants you to think of the life of the average black person trying to make it in America. Knowing true power and with a heart filled spirit of the black people have always been the motivation behind his will to succeed as an author. In his heart, he knows that the key to achieving true equality is through wealth and ownership. He wants his readers and followers to understand that black people cannot have just one person at the top of the mountain unless that person is lifting others to join them. Ultimately, he wants to dedicate his books and his success as an author to the ones gone, the ones still fighting, and the ones that will carry the torch in the future.

StarCentral Magazine recently caught up with d. E. Rogers to discuss his latest book and his journey as a successful author here’s what went down:

Can you please tell us about yourself and how you got started writing your first novel?

I was born and raised in South Bend, Indiana, but I currently live in the San Francisco Bay Area. I’m a screenwriter and the author of twelve novels: White Lie, Color Line, Just Like Your Daddy, I Know She Didn’t, Crossing Color Lines, Counterfeit Friends, Forgetting U Existed, Innocent Crook, The Dark Side of Money, Dethroned, Dynasty, and Black States of America. In 1999, I released my first novel, White Lie. I’ve also directed three short films, I’m a Stanford University-certified project manager and I’ve attended the University of Notre Dame for executive leadership and management and the New York Film Academy for film production. I currently hold a bachelor’s degree in telecommunications management and production from Purdue University and a master’s degree in business administration from Bethel College.

Growing up, I always wrote short stories and poetry in high school and college, but I never thought I could write a novel. It wasn’t until a woman I was trying to date at the time told me that I couldn’t do it that I began this journey into writing books years ago. I never got the date, unfortunately, but I got way more with my writing. Since that fire was lit, I haven’t put it out and don’t plan on doing so anytime soon. I love writing, bringing smiles to people’s faces, and making them think about the words I have written on the pages. 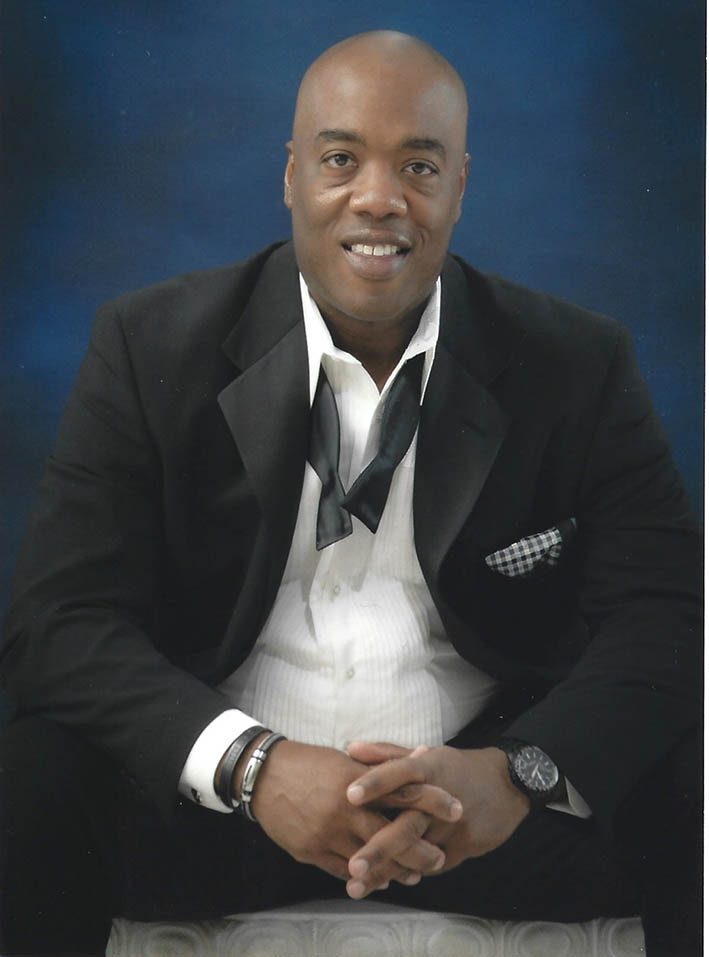 Keeping the momentum going in the story so that the reader wants to keep turning the pages to see what’s going to happen next. Once I have the lock on the beginning and ending of a story, the middle, at times for me, becomes easy to write.

Always. I try to be as creative as possible by creating stories that I want to tell and see value in others knowing and enjoying. I feel that every writer’s voice should be authentic and provide a view of life that others haven’t read before.

If you could tell your younger self anything, what would it be?

I would tell my younger self to enjoy life, travel more, make friends around the world, and take risks with your writing. There is so much to be learned by knowing the world and experiencing it first-hand. 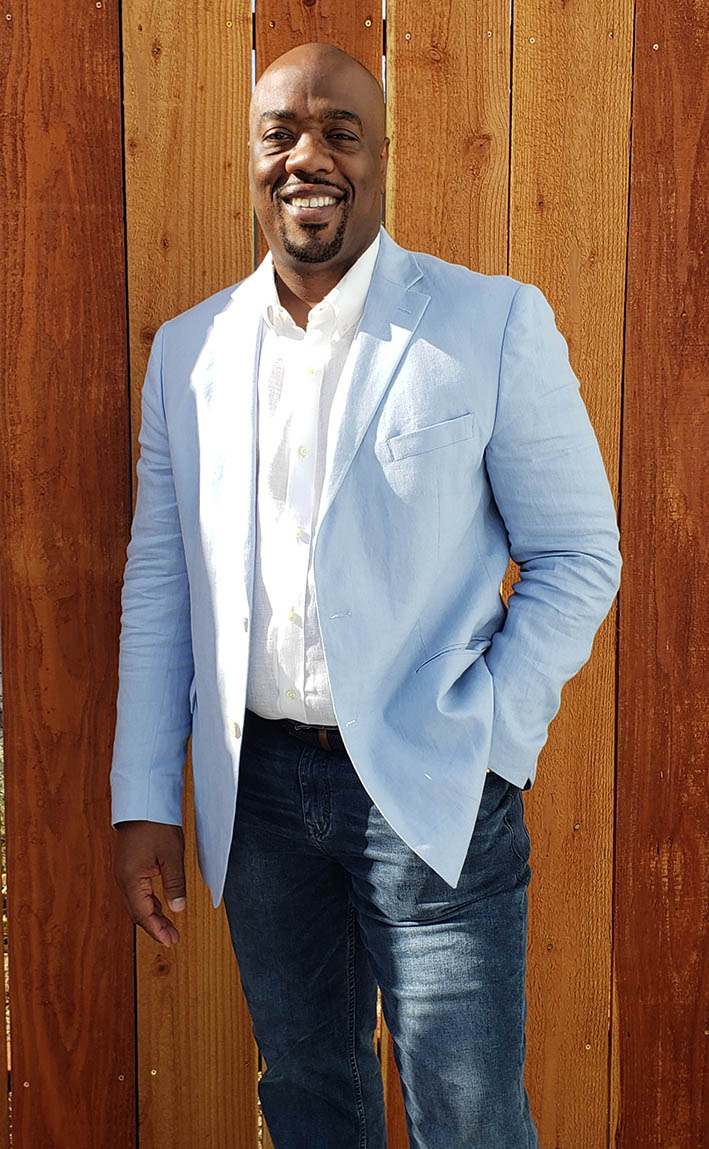 My Kryptonite is when I have a great beginning to a story, but then I can’t come up with a proper great ending. It is the most frustrating thing ever for me.

Taking a trip to Africa and Dubai in 2019. I was in somewhat of a rut with my writing and felt like things just weren’t going the way I needed them to go. It was also a birthday gift to myself. That trip gave me energy and a fresh look at life, the world, and my writing. I felt born again when I returned and my writing took off to a higher level. 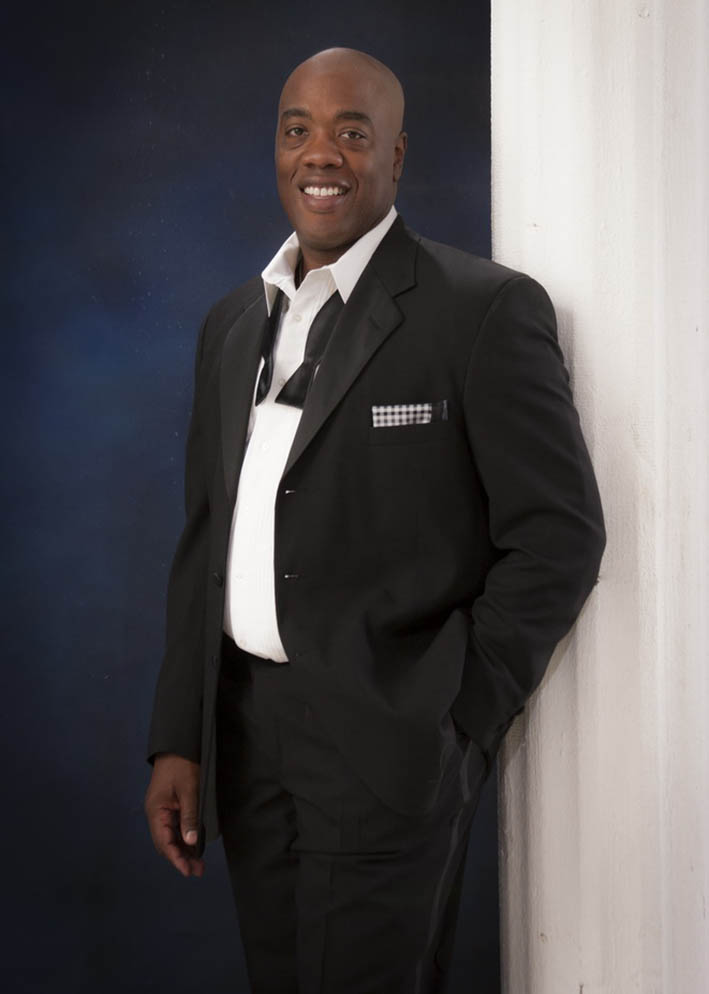 I remember watching the TV mini-series Roots with my family and seeing how language and words could uplift a person or tear them down. It really impacted me on how I used words to express myself. Roots was probably the starting point for my writing career even though I didn’t know it at the time.

How many published and half-finished books do you have? Where can we find your books online?

I have published 12 novels including my latest book release coming out on August 11, 2020. I have 1 unpublished novel that should be released by the end of the year. You can always visit my website (dE-Rogers.com) if you want to be kept on the loop on my latest books. 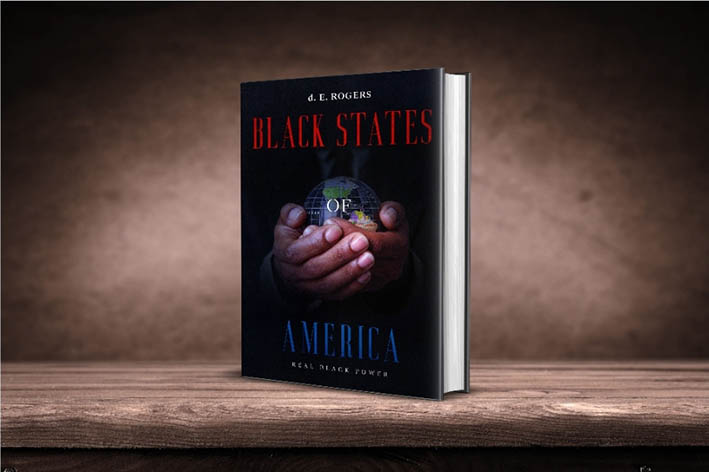 Can you tell us more about this novel?

The title of the book is “Black States of America” and here’s the synopsis: “What would have happened if President Lincoln had never been shot in Ford Theatre and managed to survive in a parallel universe?

Set in an alternative universe, the Black States of America – Real Black Power, follows an alternate timeline where President Lincoln lived. Thanks to a talented scientist and a former slave’s hot air balloon ride through a black hole in the sky, they made contact with President Lincoln which alternated the universe and prevented him from being assassinated.

For almost a century and a half, the universe in which President Lincoln had died had no knowledge that the other universe existed. It wasn’t until the year 2000 when King Jasani, the King of Sea Islands, decided to invite the other universe to share in the technological advances his world had discovered. What should have been a humanitarian mission to share technology soon took a disastrous turn when the United States chose to take the technology for themselves and slaughtered the peaceful people from the Sea Islands.

In the following slaughter and chaos of the unprovoked attack that took place, King Jasani, Queen Ayanna, and some of their entourage fled, leaving their son Lincoln behind believing him to be dead and lost to them forever.

Twenty-five years passed, and Lincoln chose to take a simple DNA test. Having no memory of his parents, he’d always been curious about who he was and where he came from. The results of that DNA test would alter his course and change his life as he knew it forever. Unbeknown to Lincoln, he was setting off a chain reaction which would have a flow-on effect throughout both worlds. 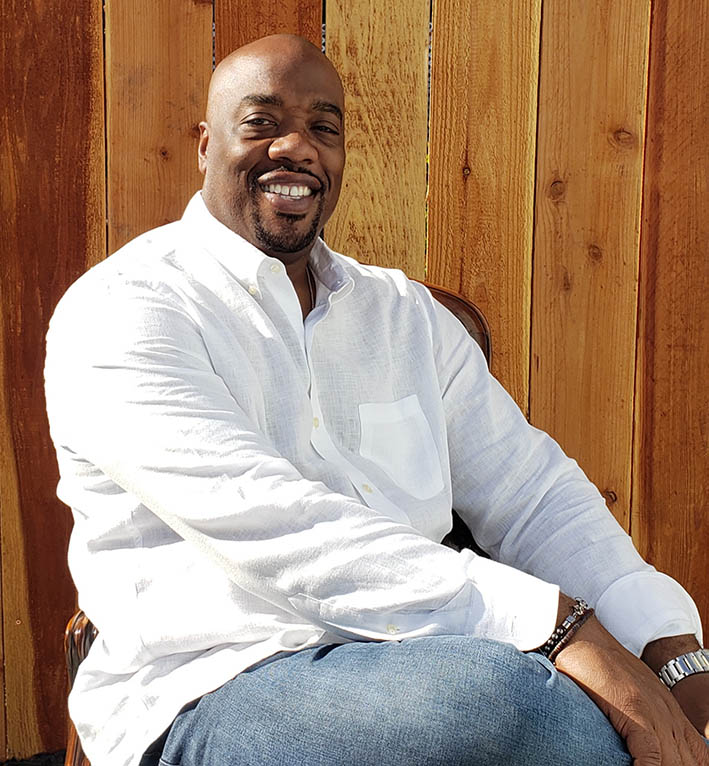 What kind of research did you do for this book, and how long did you spend researching before beginning this book?

I did a lot of research before and during the book writing process. Some parts of my book actually talk about historical events that are factually accurate so I wanted to make sure I represented those events and characters as accurately as possible.

For fiction, you have to be a great storyteller. Your story or stories have to connect with the hearts and minds of your readers. You want them to put themselves in the story as if it’s a part of them. I have written a couple of book series. Keeping stories going from one book to another is a big challenge, but I embrace it. It also helps to hear positive feedback from your readers. To me, that’s the juice that keeps me writing and being creative. I don’t want to let my reading fans down, so I give it my all every time I type a word. I want them to be endlessly entertained so that they never forget me.

Be original and don’t listen to negative people. In life sometimes people are so blinded by jealousy that they don’t want to see others succeed. You need to have confidence in yourself and your writing and believe that you will be successful no matter what others might say. 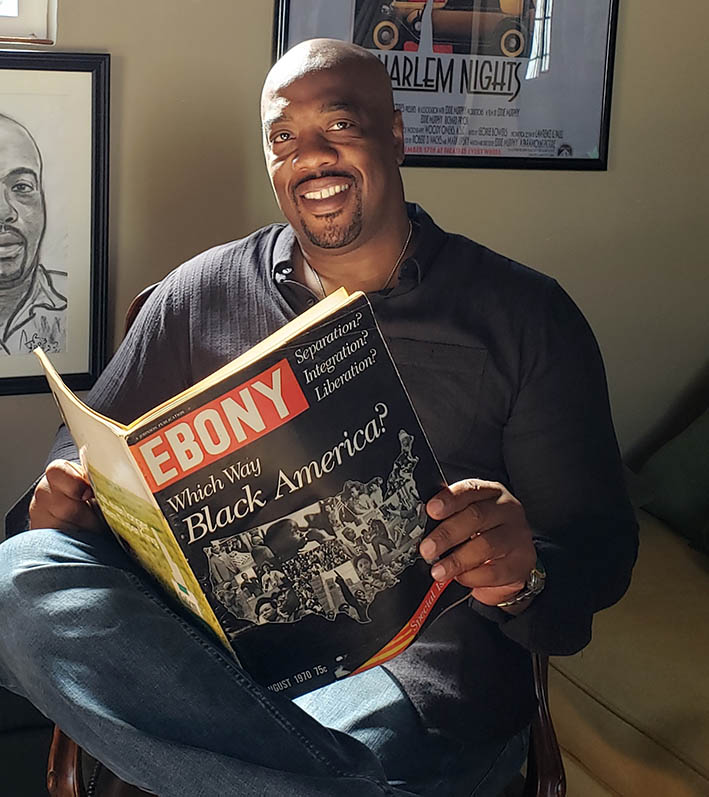 Be original, keep writing, and prove your doubters wrong. Also, write from your experiences, but remix it into fiction.

Currently, I’m finishing the editing on my next book called “Limitation of Life.” I’m also working to get three TV shows on TV within the next one to two years: Sea Islands, Torn Threads, and Music and Mayhem.