Soul Good: An acoustic night for a worthy cause 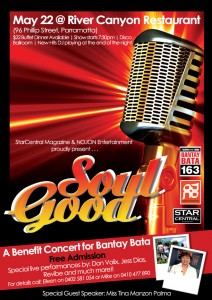 Some came to be entertained.  Some came to support family and friends.  Some came to meet a Filipino icon and some came for curiosity’s sake.  But all who left the River Canyon Restaurant on the night of May 22 left inspired.

The evening was called: “Soul Good” and it was an appropriate name indeed.  Not only was the audience soothed by the acoustic talents of the performers but their spirits were enlivened as they discovered the work of Bantay Bata (Child Watch)163.

After enjoying dinner listening to the vocal talents of Mary Ann Sansano, Christian Joseph and Jules (?), the night’s special guest stepped up – Tina Monzon-Palma, Program Director of Bantay Bata 163.  Thoroughly engaging and entertaining, it was easy to see why she has become one of the Philippines’ most respected news broadcasters.  Tina was a star in her own right – having earned a reputation for courageous journalism during Martial Law, being Child Helpline International (a global network of telephone helplines and outreach activities for children and young people, based in Amsterdam) Taskforce Head in the Asia-Pacific Region – but she brushed all that aside and made it clear to everyone in the room that the only star that evening was Bantay Bata.

Gina Lopez, then managing director of the ABS-CBN Foundation established Bantay Bata 163 in 1997 and appointed Tina to be the Program Director, a position which she happily accepted and still holds today.  BB 163 began mainly as a hotline and a rescue operation for abused and abandoned children.  It has evolved into a program that includes not only therapy for the child but for the parents as well – aiming, if possible, to reunite the family.  It also provides medical and legal assistance to the child, placement with a suitable family, scholarship programs and it raises community awareness of child abuse and neglect.  In 2003, the ABS-CBN Foundation established the Bantay Bata 163 Children’s Village.  It serves as a medium to long-term shelter for those victimized children who for psychological or medical reasons, cannot be placed with a family immediately.  It is a haven for those little ones who, until finding themselves there, knew nothing of beauty.

The night continued with performances from Revibe, Don Valix and Jess Dias. At one point, Don explained that he had wanted to play a song that reminded him of youth as the night was about the children of Bantay Bata.  He then proceeded to play the Winnie The Pooh theme song and he encouraged the audience to join him.  While it was a fun moment, it was also a poignant reminder that there are children out there who were not lucky enough to grow up to those songs and it brought home the importance of a program like Bantay Bata 163 and people like Tina Monzon-Palma that strives to restore at least part of that innocence.