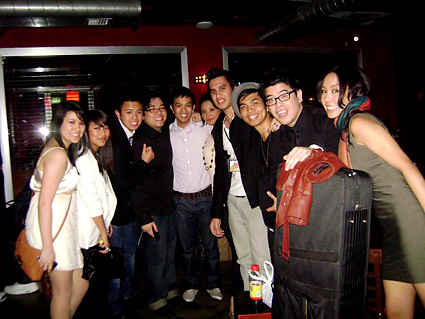 It was a cold winter’s night last Friday night and it would have been a great night to stay at home and cuddle with your special someone or watch some DVD’s with a few friends, but when we heard that Nessa Rica and her band we’re supposed to grace the stage at the Ivory Lounge, we just couldn’t resist the urge to go to the show.

As soon as we walked inside the Ivory Lounge, we were immediately greeted by the sight of a big crowd and we can already tell that it was going to be a great night.

First up was Harrison Michael Mellon. Although we weren’t able to catch his whole set because we came late, (Sorry Nojon) but from what we did get to hear – it was a very powerful and dynamic performance. Harrison’s powerful vocal range definitely set a good platform for the next set of performers to take off from.

Next up, Maria Tan and Anton Bautista took centre stage. It was apparently the first time Maria ever performed at Soul Good, but then she performed well enough to make people believe that she’s actually a Soul Good veteran. Maria started off quite slowly with some slow soulful songs, but by the end of her set with Anton – she eventually got the crowd’s seal of approval.

The next act was Neoncoustic. Being around the entertainment scene for quite some time now, high expectations were held for Neoncoustic as their set rolled on. On our honest opinion, their performance can be summed up into two words – it rocked! The lead singer actually gave the crowd impression that he was an energizer bunny in camouflage as he performed with a classic “in your face” performance. Their two original songs “I want to see you naked” and “Supersonic rollercoaster” was quite amusing. The lead singer delivered an electrifying and powerful performance – and apparently he was even sick that night! If he was indeed sick that night, then I can’t even imagine how he’d be performing if he was in good health. He would probably be doing cartwheels, back flips and doing one finger push-ups whilst singing a song.

After Neoncoustic’s energetic and lively performance, Anton Bautista came back on stage, this time to do a solo performance. He once again got the crowd going with his smooth R&B and sensual voice. He even had a little something for the ladies by saddling up to play the piano and singing some lovey dovey songs.

And then it was finally time for the main act. As Nessa Rica and her band stepped onto the stage to perform – the crowd was in a silent anticipation expecting a great performance.

High expectations were also held for her as she stepped onto the microphone – and she certainly lived up to the hype! The half an hour set suited her well, we just wish Nessa and her band could have played longer.

She sang a couple of medleys which consisted of absolute classics such as “Hey Mr DJ,” Christina Aguilera’s “Genie in the bottle,” Gwen Stefani’s “Don’t Speak,” Avril Lavigne’s “Complicated,” Britney Spears’ “Sometimes I run,” Backstreet boys’ “All I have to give” and SWV’s “Love will be right here.” She also sang some of her original compositions such as “If I knew” and “Why-what-when” which were amazing. Another song worth mentioning was an original composition called “when you’re free” written by a certain Nico Ramos, to which Nessa requested her friend Abi to sing a duet with. What can we say about this performance – It was heavenly. Nessa finally finished her set off with the song “American boy” which got the crowd ready for “Clique.” The music then stopped, the lights came on and the dust settled.

Looking around, you can tell that Nessa’s farewell mini concert definitely hit the spot. It’s a shame she’s heading off to America to pursue her studies, but at least we’ll hopefully see her through her YouTube clips.

Everything went smoothly from the minute we walked into the Ivory lounge so we’d like to give Nojon Entertainment a pat on the back for another fantastic event. Kim Aldover was also commendable as a host and it’s always a treat to see beautiful and articulate hosts – it just makes the night all the more enjoyable. The performers rocked, the room was packed, so in short -it was absolutely fantastic.