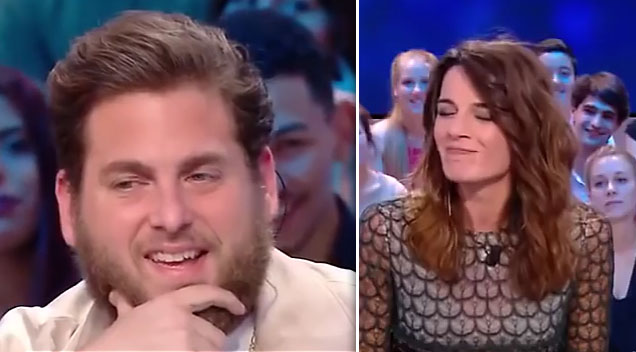 This French weather girl decided to mock Hollywood star Jonah Hill at a French talk show called Le Grand Journal by telling an extremely awkward sexual joke and Jonah reportedly cancelled all his interviews in France after the show as he was not impressed by the shameless treatment.

French TV weather girl turned comedienne Ornella Fleury initially started the awkward exchange by saying she had always fancied Jonah after she first saw him at the 2007 hit Superbad wherein she remembers him with blood from a woman’s period smeared on his knees.

She also said she remembers him being sodomised by a three-metre tall demon in the film “This Is The End”.

Hill was clearly not impressed by what she said so he responded by giving her a thumbs up then thanking her for “being invited on to the programme to be ridiculed by a local journalist.”