It’s Officially On: Mayweather And McGregor Just Exploded At Each Other In Their Recent Presscon 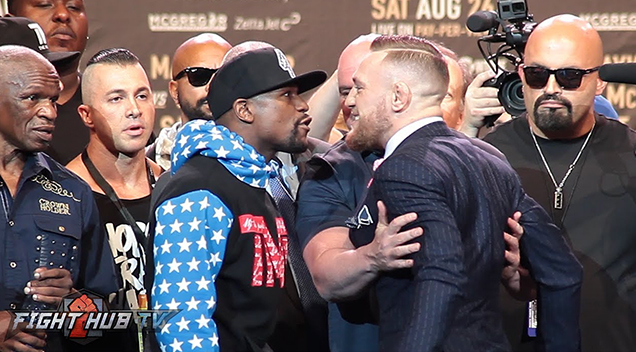 It looks like the Floyd Mayweather and Conor McGregor press tour is officially in progress.

Undefeated boxing king Floyd Mayweather and Conor McGregor, UFC’s biggest star officially launched their promotional tour at the Staples Centre and as expected, the two stars traded insults at each other.

There were around 11,000 people at the press conference and majority of the crowd were rooting for McGregor. McGregor promised a swift knockout within 4 rounds and insulted Mayweather’s TMT sweatshirt. Mayweather countered by poking fun at his $3 million purse from his last fight with Nate Diaz reiterating that McGregor may look good for a seven-figure fighter, but he looks good for a nine-figure fighter.

Check out the presscon below courtesy of Fight Hub TV: