The Verdict On Annabelle: Creation: Is It Worth Your Time And Money?? 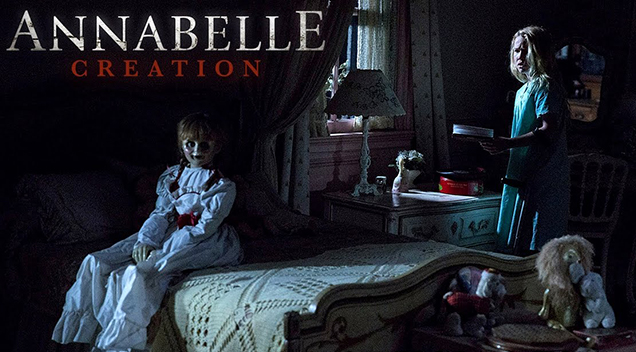 Sequels and prequels can be tricky beasts to tame. When you have a long lasting franchise that is handled by multiple directors (Like the “Thor” series for example), you can start to tell which directors put forth the effort and which ones half assed it from the get go. For example, take “The Conjuring” universe that is (apparently) being developed. With talks of spinoff films planned for “The Nun” and “The Crooked Man” (both appearing in “Conjuring 2”), it’s no surprise that a second “Annabelle” film was made after the first one was released in 2014. The first movie, however, was disastrously awful and rated poorly by practically everyone who saw it. So when talks of a prequel were popping up, one has to wonder: why is THIS the film that actually had effort put into it?

Perhaps I’m getting too ahead of myself, let’s start from the beginning because that’s what this film is all about; going back to the beginning. Samuel and Esther Mullins (Anthony LaPaglia and Miranda Otto) are grieving parents; having lost their only daughter 12 years ago. They come across a nun (Stephanie Sigman) and several girls who came from a shuddered orphanage, the couple welcomes them into their home for the time being. Unfortunately, they soon become the target of a creepy doll crafted by Samuel in the image of his dead daughter. Now the story of Annabelle begins as we learn of her first haunting and how she came to exist.

Let me clarify one thing before going any further: I did NOT see the first “Annabelle” movie. I heard it was awful, poorly made and anything but scary. I had no interest in watching it, and the idea of a prequel held almost zero appeal to me. But then people started saying “Creation” is not only scary, but there was some actual effort put behind it and it, eventually made me curious enough to check it out for myself. “Annabelle: Creation” relies more on ghoulish imagery and spooky shadows than constantly relying on jump scares (though there are several still used). There’s more tension and foreboding utilized than just relying on some creepy ass doll to do some spooky crap we all know but the characters are too stupid to figure out.

I applaud them for using fear tactics beyond just the creepy doll cliché; it helped generate a strong sense of fear that many told me was severely lacking from the first film. I encountered a similar experience when I saw “Ouija: Origin of Evil,” a prequel made to the first “Ouija” movie. Just like the “Annabelle” films, the prequel was much more interesting and effectively terrifying than the awful first movie (which I again avoided due to bad word of mouth). “Creation” continues that odd structuring of directors picking up prequels or sequels to disastrous previous installments and actually putting forth the effort to make a genuinely good film when they could have easily phoned the whole movie and breeze through everything.

Similar to “Final Destination 5”, I applaud a director willing to stick their hands in the muck and fallout of a bad horror movie and actually trying to leave a positive, applause worthy product behind to restore some dignity to a franchise that many had already made up their minds about. The period piece and origins of the dark doll do provide some interesting backdrop material to work with; giving the film (like “Ouija: Origin of Evil”) a distinct look that sets it apart from other entries in the franchise (if there is one). I like being surprised; I like being scared when I least expect it and having my assumptions dashed. It doesn’t happen so I definitely appreciate the recognizable effort of such hard work when I see it taking place on film.

However, just because “Creation” scores a stronger wave of positive feedback than “Annabelle” did, doesn’t mean this movie is without flaws. “Creation” suffers from a tediously slow first half and follows some of the same clichés and use of poorly written cannon fodder characters as past horror movies have used. Things get much better in the second half, but I understand if those who have been burned by the last film’s failure are a bit hesitant. Overall, “Annabelle: Creation” surprisingly presents a far better and far more terrifying ghost story than it’s pitiful predecessor did. The scares are legit, the visuals are truly haunting and compelling and the period piece allows for some unique approaches to the storytelling. Again, this is by no means perfect, but I applaud and recognize the effort that was put in here; just like I did with “Ouija: Origin of Evil.”