The Verdict On The Big Sick: Is It Worth Your Time And Money?? 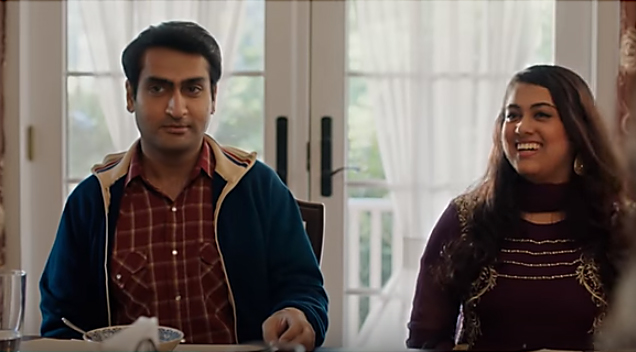 Clashing cultures is something that many couples have extreme difficulty going through. Not every culture or race is as accepting or even tolerant of allowing their family to date, wed or sleep outside their culture/race, and it’s an issue many films have discussed over the years such as “Guess Who’s coming to dinner?”, “Something New” and to a bit of an extreme example, “Get Out.” When done well, these kinds of films can create a unique relationship dynamic that produces highly engaging (and often comedic) results between two clashing cultures and a romance that could make all the hard work and hard laughs worth wild. Much as I love romances no matter how mature or light hearted they are, one thing I am tricky on is dealing with true stories.

“The Big Sick” is the supposed true story of comedian Kumail Nanjiani and how his relationship with an American Caucasian girl (Zoe Kazan) turned out when their cultures clashed. Kumail plays himself and puts his lifelong struggles on the big screen, including trying to be a stand-up comedian, dealing with his girlfriend’s highly judgmental parents (Holly Hunter and Ray Romano) and trying to discover who he wants to be when his girlfriend’s life is afflicted by a sudden coma-inducing illness. I’m not one for true stories; truth be told. You get sucked into these stories and believe these events actually happened, only to do the smallest bit of research and learn that most of it was made up as a Hollywood fluff piece and you feel cheated.

With “The Big Sick,” you don’t feel cheated or fluffed up this time; you may feel genuine laughter and emotion, but I wouldn’t say it felt deceptive or overly fluffy. I think the fact that Kumail Nanjiani is playing himself in regards to his own story, it helps connect us to his own experiences and understand what kind of struggles he went through for his job, his relationships and his family issues. The culture clash may not be translatable to everyone but we all have bad blood in our family from time to time, and that’s something everyone can get behind. Just seeing Kumail Nanjiani have to endure Pakistani traditions like arranged marriages and the heartache it causes his relationship with his girlfriend paints it in a picture that everyone can see or understand on some level.

Comedy and love go hand in hand with ease; it’s one of the reasons the genre of “romantic comedies” exists and they are displayed hilariously well in this film. Being a comedian provides Nanjiani an obvious natural flare and talent for comedy, and it shows. Everyone here excels with their comedic timing and quick witted one liners. They balance the humor and heartfelt emotion of each situation and set up with flawless finesse. I think what I like best about this film is its unique perspective into what it must have been like for Nanjiani to have to struggle opposition from both sides; compelled to obey or disobey his parent’s traditional ways, and not being 100% accepted by his girlfriend’s parents standards either.
This film’s message works into your system in ways most people probably didn’t expect; it shows how relatable this kind of cultural conflict can be when you just expose it in the right way in the right medium to the right audience. Obviously, not everyone is going to want to learn or care or even openly accept different cultures entering a romantic relationship, but comedy is something that everyone can enjoy in one way or another. I think that’s why this (hopefully) true story will work deeper and more effectively than if Kumail Nanjiani had picked some other actor to tell/play out his true life story. Keeping it more like an actual movie story and not constantly treating it like an autobiographical film was another wise decision.

If there is any real problem with this film it’s the obvious issue I already addressed way back in the beginning: confirming on whether this is true or not. It’s hard to judge a film that’s based on someone’s life because you don’t always get the answers you want, nor do you get all the questions you had left lingering clarified. I can only hope Kumail Nanjiani was more accurate than artistic with his love life story here as I’d hate to enjoy all of this film’s comedy gold only to learn more than half of it was exaggerated. Overall, “The Big Sick” is a unique experience on a cultural, family based level that uses truth, comedy and genuine heart to convey a hysterical, enjoyable story that I think everyone can learn a lesson or two from.