The Verdict On The Trip To Spain: Is It Worth Your Time And Money?? 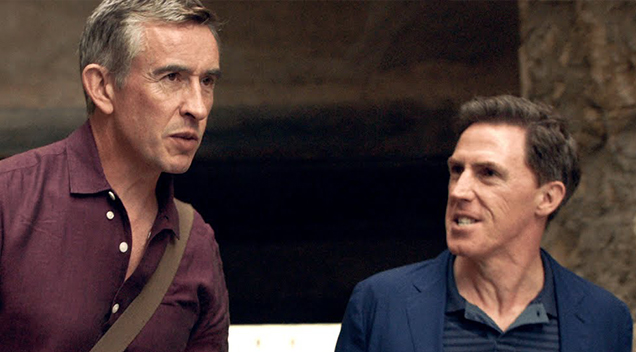 Madman Entertainment premiered their recently produced film, The Trip to Spain on Thursday 13th of July 2017 at the Reel Room Theatrette. It was a very intimate screening with dimmed lighting and seating comfort similar to a home theatre set up.

Directed by Micheal Winterbottom, an English filmmaker by profession. Winterbottom is known for his humble nature yet has had many successes in the film industry thus far. Three of his past films; Welcome to Sarajevo, Wonderland and 24 Hour Party People, have all been in the running for the Palme d’Or at the Cannes Film Festival. He tends to work with actors of intimate nature and individuals due to his past success, who include: Steve Coogan, Rob Brydon, Raymond Warning, Kieran O’Brien, Shirley Henderson, Paul Popplewell and John Simm.

The Trip to Spain was no different to his previous film-making styles. Rob Brydon and Steve Coogan starred in his latest Australian based film where Brydon and Coogan reunite once again.

Rob Brydon and Steve Coogan play themselves where they embark a journey throughout Spain seeking good food and adventure together as both colleagues and best friends.

They begin their Spanish road trip from the North Atlantic to the Mediterranean Coast. The brief for their venture is six meals in six different places, visiting Cantabria, the Basque Region, Aragon, Rioja, Castile La Mancha and their final destination in Andalucia.

After just turning 50, Coogan is yet to settle with life and is still following his heart and chasing his one true love. Mischa, his ex-girlfriend, is the lady who still owns his heart but is unfortunately with another man. In contrary, Brydon’s professional career is reaching new heights and his family, and personal life has been the most fulfilling in his entire life. Since the absence of time that Coogan has last seen his good friend, Brydon has also had another child with his long-time wife.

After the conclusion of Steve’s recent US TV stunt as a chef, he was directed by his talent agent to write restaurant reviews in Spain to promote the program. Naturally, Brydon is asked to join this Spanish endeavor to write the newspaper articles, but during this trip, he used Don Quixote as inspiration. However, Coogan is aimed at writing a more aspiring book established on the voyage and his previous experiences in Spain.

The audience was amused to listen to Coogan express that he is on the same writing level as Orwell, Hemingway and Laurie Lee, due to his recent nomination as an Oscar writer.

The Trip to Spain is the perfect film for those who enjoy a bit of banter between two middle-aged men who are still seeking themselves [self-exploration and identity] despite their age.

Before watching, a suggestion may be to research both or either Coogan or Brydon prior, as the majority of the film refers to references to their past adventures and journeys. I believe that I am in the wrong age demographic to sit for this movie, as I didn’t understand a vast majority of the references that were referred to throughout the film, but my fellow audience members were laughing from beginning to end. It lacked to grasp my complete attention as I was confused to why the huge percentage of the film was merely a literal conversation between Coogan and Brydon. I was hoping for conflict to arise at various points within the story; as there were many opportunities that the film could have been more developed, yet didn’t. I had so many unanswered questions by the end; such as: what happened to Coogan’s son and his recently fallen pregnant girlfriend? Why did Mischa lead her ex-lover on? Did Brydon accept his newest job opportunity?

The film lacked development and needed a more refined plot to grasp the viewer into the story. The final scene before The Trip to Spain ended, was the most exciting part in the entirety of the film, in my opinion. However, I shall let you discover it for yourself! Enjoy.

Check out the trailer below courtesy of IFC Film: