The Verdict On Marvel’s “The Defenders”: Is It Worth Your Time?? 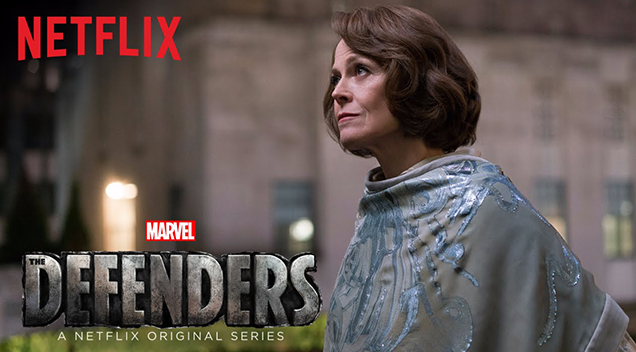 Marvel broke new grounds in television programming when they’re first, Netflix exclusive superhero show “Daredevil” came out in 2015. Much like how “Iron Man” set up “The Avengers” by linking all of the other big name superheroes into one cohesive universe, the Netflix Marvel series has been attempting a TV crossover buildup of their superhero characters. After Daredevil came “Jessica Jones,” “Luke Cage” and “Iron Fist” and now; finally these 4 New York hard-boiled heroes are coming together in the 8 episode crossover miniseries entitled “The Defenders.” While nowhere near as hyped up and epically collective as Joss Whedon’s superhero magnum opus, “The Defenders” is still a unique experience, to say the least.

When the dark, sinister organization known as “The Hand” threatens the lives of everyone in New York, four wayward crime fighters are inexplicably drawn towards the same opponent affecting their lives as well as their friends and family’s lives. The leader of the Hand (Sigourney Weaver) has a deadly new weapon (Elodie Yung), and now it’s up to Daredevil (Charlie Cox), super powered detective Jessica Jones (Krysten Ritter), the indestructible Luke Cage (Mike Colter) and the mystical Iron Fist; Danny Rand (Finn Jones) to vanquish this oppressive evil from their city and unite to become an unstoppable superhero force.

Sometimes when shows or films are released in a certain order, that order actually dictates the quality of those entries. In the Marvel Netflix series, that theory holds true. “Daredevil” is easily the best and “Iron Fist” easily the most disappointing. “The Defenders” came after “Iron Fist” but for the first time these down trotted bump heads and fists together, this was an awfully close contender for most disappointing of all the series. For a crossover they’ve been planning since 2015, “The Defenders” biggest problem is that it’s heavily rushed; the 8 episode count opposed to the usual 13 episode count is already a contributing red flag.

Each of the heroes has their own unique style, music and visual flair that is specific to the tone and feel of their own individual series. But instead of trying to bring these heroes together right off the bat, the series attempts to accommodate all four heroes’ unique tones and takes three episodes just to get them to meet face to face. The series hardly takes any time to really have these characters interact. Once the main conflict has been universally addressed and linked to all their individual problems, there’s no time for the heroes to develop some enjoyable/amusing chemistry because we’re already rushing off to an extra serious mode and powering through to the main story.

There’s this great scene when all the heroes meet at a Chinese restaurant, and they’re sitting down over take out; introducing themselves and proposing the idea of teamwork. It’s a great example of what I (and I imagine loads others) expected to see once we heard this crossover was taking place. I did appreciate seeing the supporting cast members of all the previous shows appear. Each one contributed in their own way, adding to the story and to the emotional anchors that each hero relies on; from Jones junkie friend Malcolm to Cage’s cop friend Misty Knight. I did also like how the show made subtle notes of just how different and wildly successful Daredevil is a series and as a hero. The character’s growing respect and admiration for his skills as the only costumed crime fighter on the team was a very nice touch.

Unfortunately, that’s where the nice gloves come off. This show doesn’t give us any proper amount of time to actually develop these characters as a team. They play off in pairs decent enough, but it lacks any of the depth or chemistry the stars had in their previous solo series. All the fight scenes are overcast with excessive shadows and dark shots that make it difficult to tell who is even fighting who. Iron Fist does get overly relied on too much since the plot is 80% about his connection to The Hand, and how everything is wrapped up with the villains feels too quick and too cheap for an enemy with the overture they’ve developed since Daredevil season 2.

Overall, “The Defenders” should have been on the same quality level as “Daredevil season 1” or “Jessica Jones Season 1”, not “Iron Fist Season 1.” This was a great vantage point that could have been greater had the series been given a little more time, a little more chemistry for our heroes and most importantly; a little more appreciation for the potential this accumulative hero melting pot, then we could have gotten the TV equivalent of “The Avengers.” Instead, we got a hastily bum rushed crossover series that just reminds us how great every show/season that came out before “Iron Fist” was.