The Verdict On Flatliners: Is It Worth Your Time And Money?? 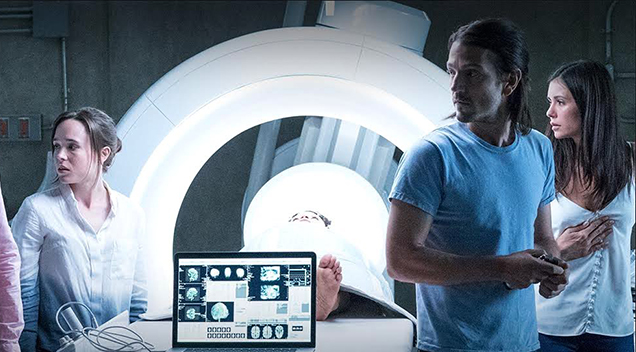 There’s been some debate circling this film in relation to the 1990 movie of the same name. Some say it’s a remake, others say it’s a distant sequel, and the only thing most people can agree on is that they unanimously hate this movie with a monstrous passion. I’ve never seen the original, I know it exists, and Keifer Sutherland was in it (and in this one as well), but that’s it. A lot of the movies people hate I end up enjoying and all the negative criticisms and arrogant flaunting of 0 percentages on uselessly flawed websites like “Rotten Tomatoes” didn’t prevent me from seeing this movie. Sequel or remake, good or bad; either way I had to see for myself what this “Flatliners” is all about and judge it’s potential badness with my own negative free perceptions.

Courtney (Ellen Page) is a medical student training with her friends to become the best doctors possible. However, Courtney wishes to learn more about the afterlife to deal with her guilt over accidentally causing her younger sister’s death. She creates a means of “dying” and being brought back to life in order to see what exists beyond death. As more of her friends engage in the same “flatlining” experience, they soon realize they are literally haunted by past mistakes and people they have wronged before; they have to make peace with their past sins before the students are made to rest in peace.

When I first heard of this film and saw the commercials, I thought it was aimed as some sort of psychological horror movie or a supernatural thriller; and in a way, it’s a little bit of both. “Flatliners” doesn’t really seem to designate itself as one category specifically. This film dabbles in many genres and those expecting a pure horror film will find a great deal of slow spots, and uneven pacing before the chills start. However, seeing how these students benefit from this experiment’s results and how each one is unique to them provides for some interesting and unpredictable outcomes for certain characters. Things may have gotten off to a slow and shaky start, but I found it oddly refreshing that I didn’t know what direction or feel the movie was going for. I started to wonder if there even were any horror elements in here or how they even connect.

When the film’s horror aspects finally did kick in, the uncertainty I had before left me genuinely surprised when things started getting creepy and intense. The use of shadows, light and eerie looking individuals made for some effective ghostly faces that were disturbing all on their own; no intense gore or special effects required. Having supportive side effects from experience gave the characters a slightly more tangible reason to experience death and be brought back. The story’s purpose does tend to change gears a few times during the film’s runtime. One minute you think this is what needs to be done, next minute something wild happens, and now we have to figure out an entirely different method of solving the problem.

Ellen Page borderlines between forgettable and decent, same can be said for James Norton as Jamie. The only real noteworthy standout is Diego Luna as Ray; the only genuinely sensible and level-headed medical student out of the bunch. Keifer Sutherland’s brief tease only reminds us how much better this movie could have been (at least a little bit) if he was the star (again) or at least had more scenes than most of the main cast. While the film’s unpredictability kept things interesting, it also directly contributed to the film’s biggest problem: its genre. The movie has no idea what it wants to be. There are sprinkled elements of horror, science fiction, teen drama, living freely, psychological paranoia throughout the film and not one of those genres get sufficient material to come off as more dominating than the others.

You end up sitting and waiting for a lot of scenes, waiting to see when the horror part comes in, or if it’s a thriller; why the characters interactions feel so sluggish and weakly developed. Even when the characters are out partying due to the buzz of “flatlining”, it doesn’t look as interesting as it’s supposed to be. Overall, “Flatliners” was nowhere near the train wreck everyone made it out to be. When the horror was around it was actually well done considering its low budget presentation, and the variety of genres kept me guessing on what would happen next. There just wasn’t anything here that went past average; some parts didn’t even make it up to average. “Flatliners” is an okay, not as bad as it seems flick that won’t knock your socks off but might surprise you in some areas as it did me; I’d wait to rent it though, personally.