The Verdict On The Florida Project: Is It Worth Your Time And Money?? 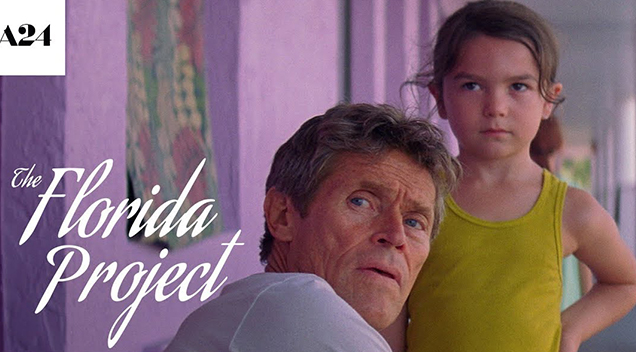 Most people have always dubbed Disney World as “the happiest place on Earth,”—a truism that has been etched in everyone’s minds and has come to symbolize a magical sanctuary for children and adults alike. However, “The Florida Project,” tells a different story of a marginalized community that lives in shadows of Disney World’s merry exterior.

The Florida Project follows a precocious six-year-old Monee, played by the talented, Brooklyn Prince and her ragtag gang, Jancey (Valeria Cotto) and Scooty (Christopher Rivera), through their misadventures in the scorching summer’s heat in Orlando, Florida. Through the eyes of Moonee, she is unaware of the struggles of the adults around her including her mother, Halley (Bria Vinaite), and motel manager/father-figure, Bobby (Willem Dafoe).

The film is a spectacle into the struggles of the impoverished who resides in the motel lines outside of the famous theme park. The idea of the film was conceived when co-writer/producer Chris Bergouch who helped relocate his mother to Central Florida and he was shocked to learn the less than magical living conditions of needy families in living by in these motels, instead of tourists. He noticed that these motels banked on the “mystique” of Disney World to keep their businesses afloat.

The entirety of the film is framed to be a “happy accident” which serves a consequence to Moonee and her friend’s mischievous yet wonderfully innocent misdeeds. At one point of the film, Moonee, Scooty, and Jancey were playing in an old abandoned house but, later on in the movie, the house was set on fire. Although it’s unknown whether Moonee and her gang were the catalysts to the fire or not, the consequence of the accident was that Scooty was not able to hang out with Moonee and Jancey again because his mother thinks that they are the bad influence.

Children are blank canvases; it’s whatever influences, values, and morals you put on the canvas that makes up who they are as a person. Moonee, although she is six and ill-mannered, she had to learn this attitude from somewhere, and that somewhere is her mother. Brooklyn Prince and Bria Vitae’s performances as a mother and daughter duo was convincing and it exudes an undeniable chemistry that is almost uncanny to one another. Both of their performances encapsulates the idea of “like mother, like daughter.” From the crass mannerisms to provocative attitudes, the pair was able to convince audience on their natural bond with each other. Although there was questionable behavior which may be characterized as “ratchet” on the part of Halley, the film always seems to the point that the actions are just the means to an end—the end being surviving in a poverty-stricken community.

Willem Dafoe, known to typecasted as the villain in every speck of his filmography, it was somewhat refreshing for him to play a character who is a heroic father figure to the children of his motel. Although Bobby is characterized as a tough and righteous guy, he has a soft-spot for Moonee and Halley who always seems to run into unforeseen circumstances that are slightly out of their control. He understands Halley as a mother has to do whatever it takes to keep her daughter afloat, but, fears that Moonee is often exposed to the consequences of her actions.

The Florida Project is a delightful film and has an aesthetic which described to be “a blueberry ice cream with a sour twist.” With the colorful personas, endearing moments, the film brings an experience that is truly magical, akin to the likes of Disney World.