The Verdict On American Made: Is It Worth Your Time And Money?? 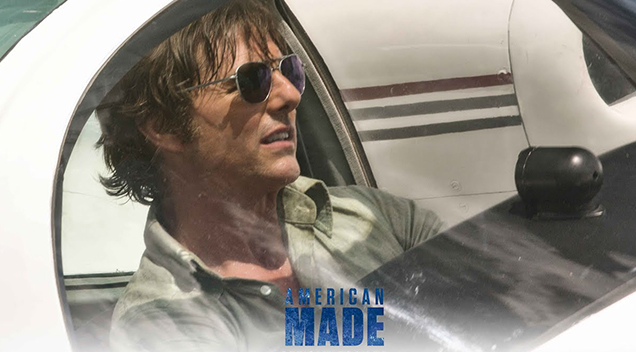 I’m always skeptical whenever I walk into a theater; about to see a movie that claims it’s inspired or based on supposed true stories or events. Sometimes the movie just used true events to inspire the basis for the plot line (“The Strangers”), (“Phoenix Forgotten”), other times they claim to be telling true stories about real people but lie and fluff it up to make it more Hollywood appropriate for audiences (“The Pursuit of Happiness”), (“The Exorcism of Emily Rose”). I usually avoid these films like the plague because I know I’ll be infected like everyone else and falsely believe the story I’m being told actually happened to someone at some point. But every now and then, a trailer for a movie looks good enough or interesting enough that I cave and risk breathing in the BS; that’s exactly what happened with “American Made.”

Detailing the events that befell TWA pilot, Barry Seal (Tom Cruise) in 1978, when a CIA agent (Domhnall Gleeson) recruits Barry to fly into enemy occupied nations and take photos for surveillance. Barry’s success and risks escalate as he starts smuggling drugs for Pablo Escobar, delivering guns to rebel groups and laundering money for the CIA and the Columbian Cartel. Barry’s life and his family’s life are changed forever and the risks and profits continue to grow until Barry’s unbelievable is told in full in this story about “the gringo that always delivers.”

Like most true story films, I never really heard of Barry Seals until this movie came out. I often wonder if movie companies count on the audience’s general lack of knowledge about these figures when factoring in the elements they plan on putting into these larger than life stories about ordinary people. I think the reason this film feels so naturally appealing and fun is due to its nature; it’s all about that American dream society pushes and expects us to follow without question, just like Barry did. Barry’s life moves like Sonic the Hedgehog, skyrocketing into danger and crazy situations at breakneck speed; never slowing down and only escalating higher in intensity. You can clearly see it on Cruise’s face when he is told to just roll with every crazy request Gleeson gives him. No questions, no second thoughts, just a crapload of money for a crapload of doing the government’s dirty work…and eventually, the Cartel’s as well.

There’s so much going on that you barely keep you can keep up with it. It’s like the film doesn’t know how to put the brakes on, trying to cram every adventurous exploit or event in Barry Seal’s life in one movie. It’s not like this story needs a sequel to use all the material needed, but you can definitely get that rushed feel and it does push some underdeveloped characters back like Gleeson’s character and Barry’s wife and family. Things certainly didn’t go the way I expected. This film is not only rampantly fast but also erratically unpredictable, I didn’t know where this one incident was going to go or how Barry was going to work his way out of this spot. I’m not 100% sure on all the authenticity of these details, but it certainly made for a consistently moving and interesting story.

For all the people that say Tom Cruise just plays the same guy and runs the same way in every movie, they need to seriously check out his work here because it’s truly some of his best. He’s no Heath-Ledger-disappearing-into-his-role-good but its clear Cruise is really putting on a different face and different smile. I really got the sense and feel that this was how Barry Seals was like in real life, that this was him on screen or if not; it’s just a really damn good and addictive personality to watch unfold on screen. I really enjoyed his interactions with his wife and the explosive-yet-still-loyal relationship they had when things kept getting more and more out of control. As Barry so amusingly puts it, “Who thought not having enough room for money would be a problem?” This is a good cast that works well with the few big names it has and combines them all into one solidly moving story that always keeps you guessing and invested.

The sense of escalation and spinning out of control is what makes me think that this feels more real than most “based on true stories” films. For the most part, the film doesn’t shy away from the uglier parts of Barry’s life. Things get dark and serious pretty quick sometimes and while I know some facts are being fudged, I definitely don’t feel everything was as “Hollywood fluffed up” as most true story films have been. Overall, “American Made” is a very fast, very driven story that doesn’t slow down for a minute and gives Cruise some of his best performances he’s done since “Edge of Tomorrow.” This hasn’t won me over with how Hollywood handles these stories, but it’s definitely a takeoff in the right direction.