The Verdict On Geostorm: Is It Worth Your Time And Money?? 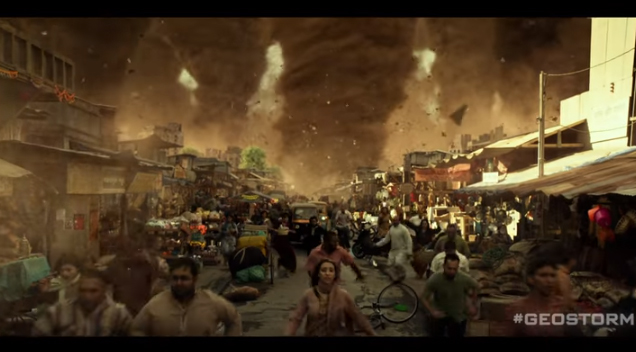 Movie genres sometimes follow the same ways of fashion trends, what was once hot fizzles out and what’s popular now is completely different than what was popular before. Westerns is a movie genre that tried to stay relevant and active, but after a slew of disastrous western films that cost way too much and sucked too hard (The Lone Ranger, Million ways to die in the west, The Magnificent 7 remake), it became clear this was a genre that needed to be put out to pasture a long, long time ago. Disaster movies were once a thing. I remember when almost every year there was a movie about some gigantic asteroid, tidal wave or super storm coming out and for a while, that was a genre that proved to be popular and profitable to boot.

Now we have “Geostorm”, a movie that came out way too late, feels just as dated despite its modern special effects and plays out like a terrible disaster movie that is 10 years past it’s time. Production troubles on this movie have been rampant, with costly re-shoots, delayed releases dates and constant trouble on the set with Gerard Butler and trying to market this film properly; “Geostorm” is a colossal disaster in every sense of the word and concept and no time machine trip back to the early 2000’s; when disaster movies were big, could possibly save this film. But I’m getting ahead of myself; let me paint you an all too clear and all too painful picture on this why picture sank as hard and as insultingly bad as it did.

After experiencing some of the most deadly and destructive global disasters across the globe, nations around the world came together and created Dutch Boy: a super advanced series of satellites that uses geoengineering technology to cancel out any major storm that takes place on Earth; anywhere anytime. However, after successfully protecting the planet for 2 years, Dutch boy seems to be malfunctioning and is suspected of being controlled by someone who has access to it. Creator and geo engineer Jake Lawson (Gerard Butler) is brought in to figure out what’s wrong with his creation, solve the mystery of whose controlling it and prevent a superstorm known as a ‘Geostorm’ from forming and ravaging Earth and wiping out millions of lives.

You know, my dad always told me that people go to see movies for different reasons and to expect different things. If you go to a comedy movie; you expect to see some laughs, if you go to a horror movie; you expect to get a little scared, and if you go to an action disaster movie then it is reasonable to assume you are going to see SOME kind of ACTION in an ACTION DISASTER movie. “Geostorm” spends way more time drumming out the most banal and boring political garbage that no one in their right minds would care about or even want to know about. We see more people sitting around, talking about the destructive dangers of these storms rather than seeing the storms themselves in action. It’s like when the most recent “Godzilla” movie came out, and he shows up for just 15 minutes in a two hour film; despite it supposedly being about Godzilla.

“Geostorm” provides us with scraps of action scenes, disaster sequences that are so brief and over so quickly, they lasted about as long as they did in the non-existent marketing commercials for the movie’s promotional material. No one is interesting, Butler is phoning his role in from start to finish and anyone else involved isn’t interesting or acted well enough to give two craps about. Even when the ones responsible for sabotaging the satellite reveal who they are, they’re motivations are rushed out so fast; you don’t even have time to process the flimsy excuse they started all this genocide for. It’s like the film has mixed priorities, only it doesn’t know what constitutes a priority or which ones should be focused on and which ones should be glossed over.

The only marginally interesting element is the amusing dynamic of the relationship between FBI agent Sarah Wilson (Abbie Cornish) and Jake’s brother Max (Jim Sturgess). They are actually kind of fun and I enjoyed them far better than any 10 second rushed clip of Brazil being frozen over by a sub-zero blizzard that barely lasted long enough to marvel at. Overall, “Geostorm” is a monstrously mangled mess that cost way too much and plays out like everyone was working for the cheapest peanuts you could find off the floor of a circus. Disaster movies are over and done with and even if this one had been made when they were in their hay day period, it still would have tanked because it failed to deliver the disaster part to begin with. There’s a reason no one heard about this movie, because like the commercials they barely aired for it, they’re not worth digging up.