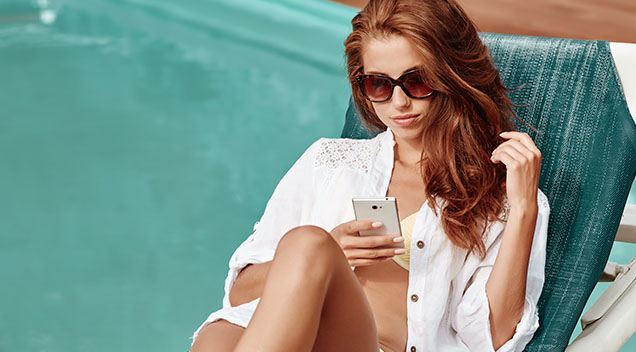 I was walking to work when I see this businesswoman walking towards me. She was impeccably dressed for the early summer weather in a knee-length pencil skirt paired with a lovely, flowy, short-sleeve blouse. She took confident strides in her envy-inducing mid heel pumps and slung over one forearm was the successful, modern woman’s perfect accessory, the drool-worthy leather tote. But, in a practice that I see more often than not, her head was buried in the cellphone she held in her hands. Whatever was on the screen had her rapt attention that she didn’t notice the streetlamp in her path. That is, until she ran right into it.

While that experience had me trying to hide my laughter, I had another encounter on the other end of the spectrum. I found myself having to grab a teenager’s backpack to stop him from walking right into the middle of a busy intersection! He was too busy staring at his phone to realise the danger that he was in. From the look of horror on his face, it was clear that he was completely oblivious until he felt me yank on his bag.

So how connected is too connected? Is the text, tweet, post or whatever that held their attention worth her embarrassment, in the case of the businesswoman, or his life, in the case of the teenager? Our easy answer is no. But then, how many times have we been guilty of this ourselves? Let me give you this answer. Too many. So many that laws had to be created to make it illegal to be on your phone while driving. So many that automotive engineers had to design cars that can stop on their own when it detects danger before the driver does – a direct consequence of distracted driving. And how many times have you yourself given the bashful “I’m sorry” when you’ve run into someone because you were looking at your phone?

Don’t get me wrong. I’m actually a firm believer that the internet and social media can be a powerful force for good. More than at any other time in history, we have unprecedented access to information. Information that in the past would have taken hours of research is now available in a few keystrokes. Social media first emerged as a powerful tool of change during a period in the early 2010’s called the ‘Arab Spring’ where demonstrators used it to organize their protests (through the hashtag ‘#ArabSpring) throughout the Arab world which included Tunisia, Egypt, Libya, Syria, Yemen and more. The uprising saw whole governments overthrown, leaders ousted and constitutional reforms enacted. In the Western world, the internet and social media has given more exposure to controversial issues such as police brutality, given us more chances to engage in public debate and allowed us the opportunity to participate in causes and campaigns such as the very popular ‘Ice Bucket Challenge’ of 2 years ago that raised over a hundred million dollars for the motor neuron disease, ALS (Amyotrophic Lateral Sclerosis). And on a more personal level, it has enabled friends and families separated by great distances to now more easily keep in touch with each other.

But again, how connected is too connected? Like everything else in life, keeping things in moderation is the key. But having such easy access to the internet makes tuning out a lot more difficult. The rapid growth of the internet and social media also means that the rules of etiquette and guidelines of its use are still catching up, especially for the younger generation. I heard some sage advice about that recently: “If you don’t want your boss, or future boss, to see it or read about it, don’t put in on Facebook.” But what teenager thinks of that when they’re having fun at a party? It is becoming increasingly the norm to ‘share’ whatever it is you’re doing, eating, etc, on social media. But where do you draw the line? On December 20, 2015, 3 young women from Philadelphia tragically found out the hard way when the car they were traveling in slammed into a parked tractor-trailer and burst into flames. Because of the fire, bystanders were unable to come to their aid and all 3 burned to death. Relatives of the one of the girls said that they received a Snapchat video showing them going at about 73 mph (117 km/h) minutes before they crashed.

The line has definitely been crossed when there are deaths involved and when there are words like ‘cyberbullying’ being added to the dictionary. But this world of instant information and instant connections is our new reality so, when do you recognize that it’s too much? It’s when your online acquaintances take second place to the people within your life. It’s when you choose to learn about the world via the internet rather than actually going out there and experiencing it. And it’s when you do finally turn off that computer and put down that phone and you can’t answer this question: “Who am I without it?” That’s when you know you’re too connected.