The Verdict On “Thor: Ragnarok”: Is It Worth Your Time And Money?? 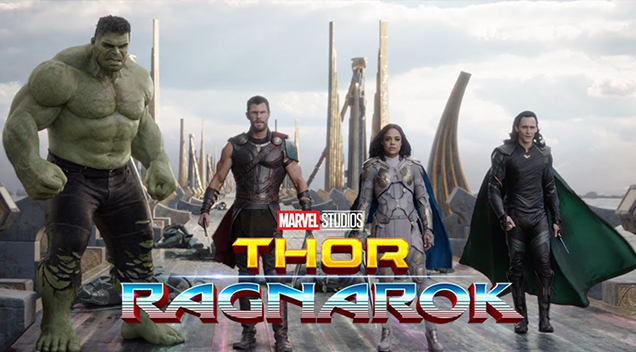 Sometimes, having the right director attached to your film can make/break one’s expectations of the quality of the picture. Directors all have distinguishable styles and reputations that dictate what people are going to expect. Takara Waititi (director of the phenomenally hilarious “What we do in the shadows”) doesn’t have many films under his belt, so for many, his choice to direct a Marvel mega-blockbuster like “Thor: Ragnarok” is a strange choice. I love his work, and even I thought this was a bold and very different move for the improve comedy director. But the subject of the end of the world (Ragnarok is Norse for the apocalypse) doesn’t sound like something that would make for a funny movie; considering the dark implications. Still, even the most disappointing Marvel movie hasn’t failed me yet so let’s see where this one stacks up.

Thor (Chris Hemsworth) returns to Asgard, his homeland, to deal with his trickster of a brother; Loki (Tom Hiddleston) for the umpteenth time. Things get worse when Hela (Cate Blanchett), the goddess of death is freed from her imprisonment and easily destroys Thor’s trademark weapon and cast both him and Loki off into a distant, trash packed planet. There, they encounter Valkyrie (Tessa Thompson) and the Grandmaster (Jeff Goldblum); strange beings who capture aliens from various planets and pit them against the planet’s reigning champion, The Incredible Hulk (Mark Ruffalo). Now Thor must forge new allies, both friendly and foe, to escape this rancid new world and save his own before Hela decimates everyone and everything in Asgard.

As I said before, dealing with doomsday material usually makes for very depressing media material, but under the brilliant comedic writing of Takara Waititi; “Ragnarok” is not only the funniest movie in the MCU…but it is also one of its absolute finest. The movie seamlessly interchanges some of the most intense, darker changes to Thor’s world and the characters we’ve come to know and love, with gut-busting, voice cracking rounds of laughter that come at you almost every waking moment from every possible character. Every actor shows off top-notch comedy chops, everyone from Hemsworth, Hiddleston, Ruffalo, Goldblum (not like there was ever any doubt with him), to Hela’s brooding goon Skurge played amusingly by Karl Urban.

The film never lets up with its humor; it always keeps the jokes coming; even when coming directly off or leading into something dark and tragic and this story has quite a few tragic shockers. The battle scenes were beyond epic, some of the best the MCU has ever crafted; especially Hulk’s battle with Thor in the arena and Hela’s slaughter of the Asgard armed forces. I feel Blanchett brings a delightful sense of darkness to this role, something we haven’t really seen from her or any other Marvel villain in a while. She has her own look, a wild sense of style and an intensity that really surges in her eyes when she’s mercilessly tearing Thor apart. Including other Marvel heroes like Hulk and Dr. Strange add a nice bit of roundness to the overall cast; providing just enough humor and involvement without dominating the story.

In fact, Hulk’s inclusion here allows for the development of the character like we’ve never seen before. We learn more about him and see he thinks, feels and speaks as more than just a primitive beast that likes to smash everything. By far the biggest stand out has to be Tessa Thompson’s Valkyrie. She is a welcomed addition to the MCU’s roster of heroes. Her tragic backstory, cynical nature and undeniable presence make her feel like she’s always the biggest person in the room; even against the more recognized likes of Thor, Loki, and Hulk. It’s not a spoiler to say that this movie shakes things up quite a bit; setting off huge changes that will greatly affect the characters and the story for the rest of the MCU’s duration. That being said, I cannot deny a few of these changes came in rushed and could have benefitted from just a few more minutes to extend and appreciate their meaningful effectiveness a bit more.

Overall, “Thor: Ragnarok” is everything I hoped it would be and way much more. I couldn’t stop laughing; the jokes just get better and more memorable. There are more quotable lines in this film than all the DCEU’s films put together. Takara Waititi is a comedic genius, and this movie proves that to a much grander scale audience than he’s ever been used to. I knew he’d be the perfect fit for this brand of humor and I’m so glad Marvel took a gamble on him because it brilliantly paid off. This is the best “Thor” film by far and easily one of Marvel’s best; ever.