The Verdict On “The Disaster Artist”: Is It Worth Your Time And Money?? 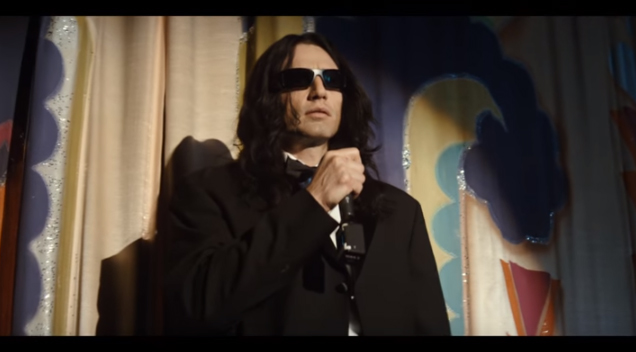 At the very beginning of this film, there’s an introductory piece where famous actors and directors like Kevin Smith and J.J Abrams are interviewed about their thoughts and feelings about the impact Tommy Wiseau’s movie “The Room” has had on them. Comedic actor Adam Scott commented that more people remember “The Room” than whatever films were nominated and won at the last awards show…and he’s right. “The Room” will be discussed for decades to come because of how bafflingly bad it is, and thanks to the bizarre backstory behind the film and the man behind it; we have an unexpectedly brilliant comedic biopic that will introduce a whole new generation of moviegoers to what kind of man would make a movie like “The Room.”

“Disaster Artist” is a cinematic adaptation of the book of the same name, written by actor and real-life best friend of Tommy Wiseau; Greg Sestero. Played by James Franco and Dave Franco respectively, the two wanna-be actors strike up a strange friendship and move to Los Angeles on a whim to fulfil their Hollywood dreams. Tommy puts together a movie all his own and starts filming it; despite his eccentric behaviours and complaints from his crew. The result is a movie that no one will forget and everyone will remember…but for all the wrong reasons.

I had the unexpected “pleasure” of seeing “The Room,” though thankfully it was with a “Rifftrax” commentary track, which made the movie infinitely more tolerable. Making a movie about a creature as disturbingly bizarre as Tommy Wiseau doesn’t sound like it’d be Oscar award material…but it turns out, it actually is. James Franco directs and stars as Tommy Wiseau, and while many write Franco off as a one note-fowl mouthed comedic actor who just does Judd Apatow and Seth Rogen movies, this film is living proof that he is far more talented and dedicated to his craft than people realize.

Many times throughout the film, I forgot that Franco was acting as Wiseau because he looked, sounded, even walked exactly like the real Tommy Wiseau. He truly disappears into this role and manages to capture every abnormal, exaggerated line and mannerism Wiseau displayed throughout his film. This is a rare breed of film animal that manages to provide accurate, authentic details about a real person’s actual life AND make it feel like it’s a genuine comedy movie. I feel like this movie explains so many confusing scenes and elements of “The Room.” Like when Wiseau keeps laughing at an inappropriate story and is repeatedly told it’s not something his character should be laughing at, but he does it anyway and the crew just keeps the shot as is because they knew he’s not going to stop doing it.

I’ve seen Dave Franco many times before this film and I originally felt he was just some moderately funny actor who only made it because of his brother’s success. I was happy to be proven wrong as Dave Franco really steps up his game here. His naïve enthusiasm and passion for the Hollywood life feel infectiously real. The frustration over his friend’s damaging decisions comes off as powerfully painful to the audience as it does to Greg. There’s also a surprising assortment of fine actors discretely worked in here, like Josh Hutcherson, Zac Efron, Seth Rogen and Paul Sheer to name a few. The real focus never falls off or Wiseau or his relationship with Greg, they’re always the story we were meant to follow in this movie.

The only problem this film potentially has it its limited availability of interest to others. People who have not seen “The Room” or even heard the name Tommy Wiseau will most likely not understand the appeal or desire to see a film about his life. It’s not like Anthony Hopkins in “Hitchcock” where the director is already legendary; as is his works, and seeing a movie about his life could easily snatch people’s attention. It’s a shame too because Tommy Wiseau, “The Room” itself and it’s strange journey to B movie success is one of the most fascinating stories to come out of Hollywood in many years. It doesn’t make sense why this film is such a surprise hit, or why Franco would want to direct and star as the man who made one of the worst movies ever made.

Be that as it may, “Disaster Artist” is brilliantly crafted, expertly directed and inspiringly well-acted to the point Franco truly disappears into his role and becomes near unrecognizable. I always think movie award shows are a pretentious, exhaustingly large waste of time and are generally rigged 90% of the time anyway, but if there ever was a movie or an actor who richly deserved those highly coveted awards; Franco and “The Disaster Artist” are the ones.