The Verdict On Pitch Perfect 3: Is It Worth Your Time And Money?? 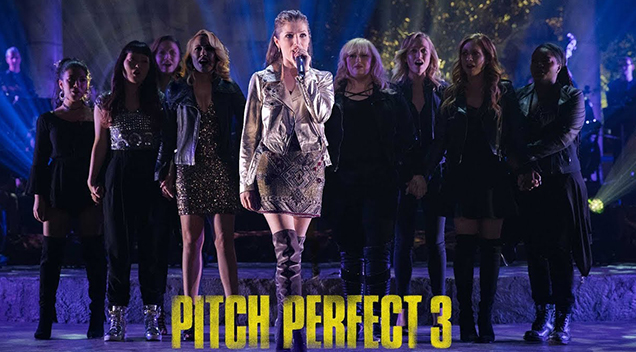 At first glance, the “Pitch Perfect” series was complete mystery to me. I didn’t get the appeal, the idea of “Riff offs” sounded silly and absurd and it seemed to be pitching towards a particular audience that I didn’t feel I would ever be a part of. My wife convinced me to give the first film a try and I must admit; I did enjoy it. Then I saw the second one and found that one to be infinitely better, funnier and more spellbindingly beautiful with its music choice and talent. Well it’s time to close out the story of the Bella’s with its third (and supposedly) final entry in “Pitch Perfect 3.” I felt the second one wrapped things up deliciously well, so let’s see if the third entry can produce a more complimentary swan song for this comedic jukebox of a film series.

Despite winning many a championship, the Bella’s fall into disarray as their careers fizzle out and their musical fame is rapidly dwindling. A chance to perform at the USO tour opens up lots of new possibilities for Becca (Anna Kendrick), Fat Amy (Rebel Wilson) and the other Bella’s. Now the girls are back for one big sendoff show and dealing with all sorts of new drama, new problems and new guys…and handling them in the most comically absurd and disastrous way that only the Bella’s know how to do.

The idea of the Bella’s falling into obscurity and struggling to remain relevant without playing instruments or singing original songs is a natural and expected dilemma to pop up in a series like this. There’s definitely a hint of competition with the other bands performing at the USO tour, but aside from one excellently choreographed “battle of the bands” like number, the rivalry never feels as strong or as important as it had in the past films. The humor still feels as outrageous and crazy as before, but I feel the situations they get into this time around feel unnecessarily over the top to make this feel like a grander “adventure” than it needs to be. Having Fat Amy struggle to deal with her estranged father (a quite hammy John Lithgow) is a funny angle and it works, but then it gets tangled up into a quasi-spy parody movie by the end of it (and the beginning as well); it kind of felt like a wild card stunt to make the journey more epic.

Rebel and Kendrick continue to be the stars of the series, overshadowing most of the other girls; with the delightfully disturbing Lilly played by Hana Mae Lee being the exception. The gals are still a blast and their continual jabs from franchise regulars (and national treasures) Elizabeth Banks and John Michael Higgins never fail to produce a laugh. However, the writers feel like they’re not funny enough on their own and need to escalates more stakes and more hot guys to dangle; ultimately dismissing the boyfriends of Becca and Amy that they developed over the course of the past two films. It felt like a cheap means of forcing plot devices by writing out two characters I enjoyed before. Even if the actors didn’t want to return for this third outing, it feels disappointing to see them dismissed so easily and nonchalantly in the beginning of the film.

The music is still great and Kendrick’s voice proves to be an amazing force of nature; even in the simplest or smallest doses. I think that’s the one thing the film struggles with the most, not the quality of music but its use and its importance. This crew never needed to make a PG-13 version of “Spy” to be funny; they’re already funny and they’re already dealing with the music issue, which is what these films are all about! The outrageous stunts feel like a desperate means of making the film stand out or act as a more glorified send off, when in fact, it kind of makes them seem more like Jason Voorhees in “Jason X”; being shot into space because no one knows what else to do with him. The humor is still funny but that still only comes from the original cast. None of the new characters are interesting or even remotely humorous.

I completely understand the need and desire to make a third “Pitch” movie, it’s profitable, funny and always creates highly enjoyable soundtracks for people to tap their feet to. Overall though, “Pitch Perfect 3” falls short in comparison to the previous films. “Pitch 1 and 2” slammed out better tunes, landed funnier jokes and made infinitely better use of its actors and characters. This film feels too fish out of water/over reaching for my tastes and while I laughed time and time again, it just doesn’t pack the same “Pitch” punch I was hoping it would. It’s a fun and enjoyable film in its own right; I just feel they could have closed out on a much better note with “Pitch Perfect 2.”