The Verdict On “The Shape of Water”: Is It Worth Your Time And Money?? 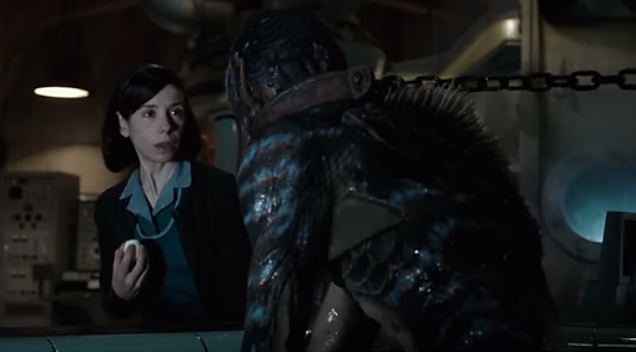 Before Universal’s “Dark Universe” cinematic universe project fell apart thanks to the abysmal quality of Tom Cruise’s “The Mummy” feature, director Guillermo Del Toro pitched his own unique idea for a remake of the “Creature from the Black Lagoon” movie. Universal rejected his idea and Del Toro had such a passion for the story he created that he just went out on his own and made the movie the way he wanted anyway. The result is one of the most visually stunning, exotically beautiful and bizarre films to come out of 2017; one that has captured many people’s attentions and even scored more award nominations than any other movie this year. Is this fish man love story worth its hype and praise? Let’s dive in and see.

Set during the 1960’s, mute janitor Elena (Sally Hawkins) works at a government research facility with her fellow janitor and friend Zelda (Octavia Spencer). Elena’s world changes when she meets an aquatic fish creature (Doug Jones) who forms an emotional and romantic bond with the mute woman. They understand each other and she wishes to free him before the creature’s tormentor and captor; Richard Strickland (Michael Shannon) dissects him for scientific research. Now Elena must risk her life and others in order to rescue her inhuman lover before time runs out for both of them.

I’ve long been a fan of Del Toro’s work. His vivid, dark imagination have brought to life some of the most memorable monsters and unique cinematic experiences in decades. He’s so talented that countless companies from DC comics to Disney studios have tried to wrangle him to work on their projects. This one though, truly feels unique amongst his other works and that’s saying something. This is a bizarre, time capsule of a fairy tale; like “Edward Scissorhands” but far darker and a lot bloodier, though the sweetness and surreal enchantment is still there. This is one of those ideas that, on paper it sounds absurd, but Del Toro not only manages to make it work he makes it invigoratingly believable and doesn’t make the concept as absurd as it might sound.

Sally Hawkins is a wondrous mix of banality and beauty. She feels pure and innocent but real and ordinary, enough that you could very well meet her on a bus or sitting next to you in an airport. Her friends and family all share distinct and brilliantly presented performances from the likes of Octavia Spencer and Richard Jenkins, in fact I think this is some of Jenkins best work. The monster is amazingly well crafted; beautiful even. His chemistry with Hawkins doesn’t feel too rushed or “Beauty and the Beast” forced. Tender time and care is given when handling his development with Elena and once they officially become “together,” the movie continues to change and develop further in ways I hadn’t expected at all.

By far though, the biggest calls for celebration must be reserved for Michael Shannon who is all kinds of crazy as Strickland. His character is an almost absurdly comically dark personification of traditional, racist/sexist 1960’s values; living the American dream but secretly proving to be a far more terrifying monster than the gill man he’s locked up like an animal. He becomes more unhinged and more predatory as the story progresses and it’s towards the end that he really comes home into this role and proves he is a figurative and literal force to be reckoned with; as a character and as an actor.

The use of music, dancing and colors of also crucially important throughout this movie. It’s like watching a collection of the best old timey dance films, shorts and songs rolled into one and faithfully enhances the fairy tale feeling. My only slight criticisms come when a random (but beautifully shot) musical dream sequence comes in at one point, and certain underwater “escapades” between Elena and the fish man that felt a bit too rushed and out of the blue. It’s not what they did that made me frown, it’s how quickly it came to pass so matter-of-factly. Overall, “The Shape of Water” is one of Del Toro’ best movies and easily by far his most beautiful and imaginative. It’s a tale as old as time but sung and presented in the most peculiar means of rhyme and for once, I completely and totally understand and agree why so many critics have showered this film with golden trophies and thunderous critical applause.