The Verdict On Atomic Blonde DVD: Is It Worth Your Time And Money?? 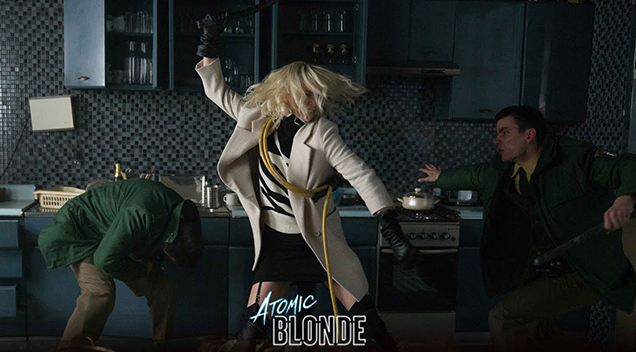 Anyone can be a bad ass, doesn’t matter how old you are, what nationality you are or what age you are. Liam Neeson proved in “Taken” that actors you don’t expect can take on roles you would never have believed and kick ass forms of ass in it. Charlize Theron has been physically and mentally preparing for this role ever since her work on “Mad Max: Fury Road, ” and it shows. There’s been a compelling need for strong female heroes/ass kickers in Hollywood lately (well, forever actually). Thanks to the success of wildly successful comic book adaptations like “Wonder Woman,” it’s made things easier for other actresses to kick out the glass ceilings and create their own iconic heroes and characters to be recognized. “Atomic Blonde” is one of those characters, though hero might be a strong choice of word.

“Atomic Blonde” takes place during the fall of the Berlin wall. MI6 Agent Lorraine Broughton (Charlize Theron) is sent into Berlin to meet with contact John Percival (James McAvoy) to recover a priceless list from whoever and whatever comes gunning her way and to bring it back at all costs. This list contains the identities of every undercover agent working around the world and could prove deadly if delivered or sold into the wrong hands. Lorraine must punch, kick, fight and shoot her way through endless hordes of ruthless killers all gunning for her head.

Charlize Theron truly feels at home in this role. She’s stone cold serious, a wicked fighter and her fight scenes with countless thugs are not only impressive, their intensely gritty and realistic. Many films like “The Bourne Identity” or the “Transporter” films rely on over the top, outlandish fight scenes that make the hero look like an indestructible martial arts machine. “Atomic Blonde” feels grittier, less stylish and more authentic with its brutality. There’s an extensive fight sequence in a stairwell that reaches a point where Theron and the thug she’s fighting have to actually stop and relax for a minute because they’re so exhausted from fighting.

The catchy soundtrack will keep the movie and the beat grooving from start to finish, it’s one of the best soundtracks I’ve heard to a film this year. James McAvoy proves he is a treasure and a delight in any film he’s in. My only beef with his performance is that we don’t get enough of it as I love everything he says in every scene he’s in. Theron does well as Lorraine. She provides ample amount of intensity to the role; fitting into it seamlessly well. I’m aware this story is based off a graphic novel; however, if the point was to make this appear a launching vehicle for more “adventures” with this character in future stories, she doesn’t really make the character THAT likable. Very little is explained about her or her past and we don’t see enough of a personality to know if we’re supposed to care or not on whether we see more of Lorraine Broughton in future films.

For a tough as nails spy movie, the plot certainly leaves something to be desired. The story is paper thin, too much effort goes into too many twists at the end to make a difference and eventually, only the action scenes hold any lingering speck of your interest. This plot has been used in almost EVERY OTHER spy movie, so much so it just feels like a cop out plot device everyone copies and pastes to their spy story because no one can cough up anything better, and even if this story came directly from the graphic novel, that still doesn’t make it any less unoriginal. I am by no means saying that Theron is bad at what she does in this film; I am saying that the reason why she is doing what she does in this film is flimsy and poorly replicated.

Overall, “Atomic Blonde” is average at best. The realistic, ultra-bad ass fight scenes and the bouncing soundtrack are easily the only things really worth coming to see here. The message and figure represented here are both very good ones and much needed in our time of rising female stars and superheroes, but much like the female “Ghostbusters” movie, this isn’t exactly the right way to go about doing it. Theron and McAvoy rock the house but with a plot this thin and this run of the mill, there’s not much keeping this movie fresh in your minds. It’s a fun ride but only if you’re looking for a cheap one with a small price tag because this really wasn’t worth an expensive rental fee.