The Verdict On The Hitman’s Bodyguard DVD: Is It Worth Your Time And Money?? 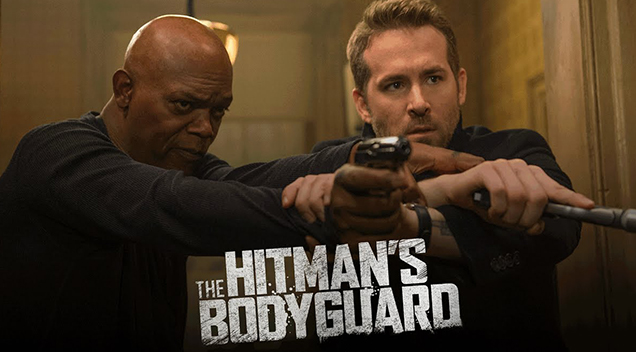 Movie genres can be as fickle as fashion trends. One day this can be hot and on everyone’s minds and lips, the next; it’ll be gone and buried so deep that no one will ever dig it up again. Westerns have died out (thankfully), and up until the review in question, another movie trope/genre that had all but vanished was the buddy comedy movie genre. Slapping two actors who don’t seem like they’d make a good fit and hoping movie magic strikes. Sometimes it works like Jackie Chan and Chris Tucker (The Rush Hour trilogy), and other times it ends up as a colossal misfire that fails to spark such as Eddie Murphy and Owen Wilson (I Spy). In the case of “The Hitman’s Bodyguard”, the buddy comedy formula is back in full R rated force.

After suffering a massive loss of credibility as the world’s best bodyguard, Michael Bryce (Ryan Reynolds) is roped into a high profile protection case by his ex-girlfriend (Elodie Yung). Bryce has to keep a hitman (Samuel L. Jackson), who has tried to kill him a number of times, alive to testify against a Russian dictator (Gary Oldman) and stop him from going free and returning to power. Now the world’s best bodyguard and hitman are stuck together, trying to avoid getting killed by every mercenary hunting them down, and trying not to kill each other long enough to make it to court on time.

Buddy comedy films rely strictly on the simple element of having two actors piss each other off to the point they want to kill each other, only to end up having them create a surprisingly unbreakable team; sort of like a messed up version of a screwball comedy film. While the testifying witness angle is nothing new (16 Blocks, The Client), you don’t feel the weight of the banality of the plot as long as Jackson and Reynolds are both on screen together. These guys are a mouthy pair and they, work perfectly together by being an imperfect duo. Jackson and Reynolds are both mouthy stars, equipped with so many one liners and smart ass wisecracks; one has to wonder if the pair improvised half their arguments just to see who could out-mouth the other. They’re both too funny for their own good.

The pair plays off each other well, each one having a hang up that justifies their chosen professions, and more importantly, their choices they’ve made in their relationships. I like the idea of love being this strange, stressful link that brings them both together with their backstories. Elodie Yung pulls out a much better (and more likable) performance than her turn as Elektra in Netflix’s “Daredevil” series, and Salma Hayek playing Jackson’s psycho-prisoner wife was an even more hilarious addition to an already satisfying kill crazy comedy. Despite the violence and bloody body count, this movie thankfully goes more towards comedy than a dark comedy. These guys animosity towards each other never gets boring or feels like it’s getting repetitive, and the action keeps escalating things to new heights with each new sequence. There’s a particular boat chase scene involving multiple pursuers, cars, and gunfire that stand out as the best sequence in the entire film. The plot involving a leak in Interpol and tying everything together isn’t bad per say it’s just not as engaging. Another unfortunate disappointment is the lack of proper use of the likes of Gary Oldman and Salma Hayek. Gary Oldman feels like a wasted resource here; playing a toned down, less interesting version of his character from “Air Force One.” Hayek gives a wickedly funny take on this film; it’s just her lack of screen time felt almost criminal. Though I guess it only made natural sense that the writers and director nailed down the chemistry between Jackson and Reynolds as their top priority.

Overall, “The Hitman’s Bodyguard” doesn’t dig up any new territory here but it sure as Hell is fun and it’s clear Jackson and Reynolds are having the time of their lives making this movie as fun to watch as it probably was working together. The dialog and foul-mouthed, bickering banter are what sells this film and make you not as worried about any other negatives to nit-pick over. Granted, some can’t be ignored and neither should the likes of Gary Oldman and Salma Hayek. The action, the comedy, the chemistry, it’s all here, and it all works; it’s not gonna break the bank or your funny bone, but it will certainly give both quite a few splits that were well worth it in this reviewer’s opinion.