The Verdict On The Party: Is It Worth Your Time And Money?? 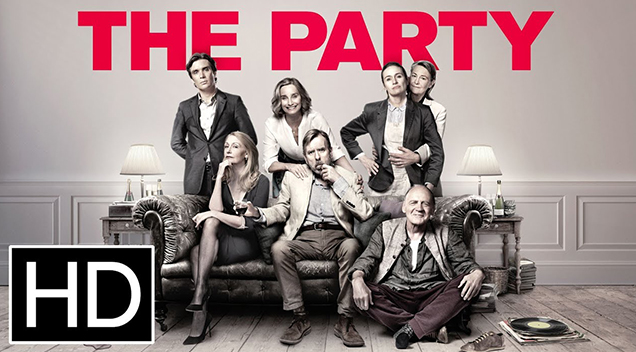 If you were, to sum up, Sally Potter’s “the Party” in two words, it would be “unexpected escalation.”

How can a seemly innocent civil reunion amongst old friends escalate into a disastrous fiasco with everyone participating in screaming match??

The answer: unexpected secrets exposed, bottled-in revelations and a whole lot of baggage and guilt.  The movie packs a punch with an abundant of dark comedic jabs and scathing truths of Britain’s political climate.

Janet is the newly appointed Shadow Minister of Health, and to celebrate her appointment she invited some guests—April, Janet’s acid-tongued and self-proclaimed cynic/realist, Gottfried, April’s eccentric life coach and spiritual healer boyfriend, Jinny, a pregnant and bright-eyed, bushy-tailed chef, Martha, Jinny’s older partner and women studies professor and the elusive Marianne who happens to be Janet’s subordinate/underling and the “Banker Wanker” husband of Marianne, Tom.

In addition to this, the crowd is Janet’s husband, Bill who is responsible for the unforeseeable entropy that will take place later in the movie. The movie opens up with Bill sunken into his armchair and staring vacantly at the audience, listening to somber music and drinking wine. A man who seemly overshadowed by his ambitious, career-oriented wife, and sacrifices his professorship at Yale for the sake of her. The irony is that he announced he became terminally ill, whilst his wife was campaigning for her position as “Shadow Minister of Health.” (How clever, Potter!)

Let’s talk about the annoyingly delightful Gottfried. At first, you might think he is “qusai-woke” and rather a floozy but, he gave a refreshing outlook on what is like to be spiritual. As Bill turned to him for a second opinion, as himself was governed by rationality and science all his life. Gottfried explained in a great conviction that sometimes being blissfully ignorant might be answered, instead of wallowing in the depth of rationally. It might have been a nod to the current post-truth era of politics that the world currently resides in, where facts don’t matter and nonsensical rhetoric stirs the emotions of people.

The movie‘s film genius owes much of it to the iconic dinner party troupe, a common premise that starts out civil but ends up in madness. Potter managed to effectively use the troupe as a template for a much necessary critique of political ideologies.  The dichotomy between the idealist and cynic is personified through Janet, who has a blind faith in the parliamentary system when change, whereas April, who lost all hope and has a borderline antichrist stance on change.

A touching moment between Janet and April, which took place in the bathroom after an unexpected revelation that Bill wants to leave her for Marianne and a satisfying blow to his face, is when  Janet asked if her political ambitions caused her to neglect or contribute that lead up to Bill’s wellbeing and his affair.  April assures her it’s never been that and expresses her unwavering admiration for her optimistic outlook on change.

She shot the whole film in monochromatic black and white, which gave a vintage touch, paid homage to the iconic “party of social manner” troupe of the 1950’s silver screen. It probably takes on a more dramatic effect as the whole plot set-up of the bleak and pessimistic themes that made “The Party” very refreshing to watch in the first place.

With an allure that resembles uncannily like a Virginia Woolf’s novel, peppered with sharp wit and pessimistic jabs, The Party is something you would keep you laughing until the very last gasping moment.