The Verdict On “The Commuter”: Is It Worth Your Time And Money?? 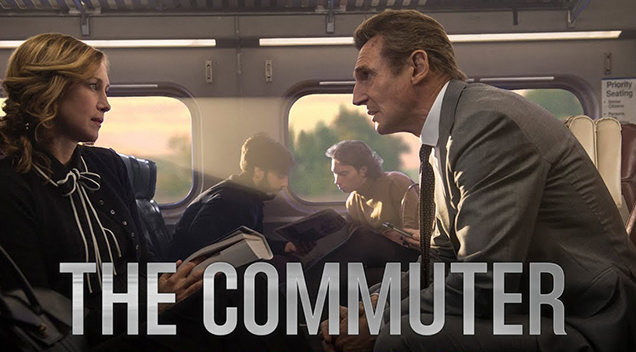 Liam Neeson may be in his 60’s, but he’s become Hollywood’s favorite, distinguishable action movie star. Ever since he announced to the world about his ‘particular set of skills’ in “Taken,” Neeson has been starring in similar action/thriller films and despite his age; doesn’t show any signs of stopping soon.

His latest film “The Commuter” is directed by Jaume Collet-Serra, a director who is largely responsible for expanding Neeson’s career as an action star; having cast Neeson in no less than four films (Unknown, Non-Stop, Run All Night), including this one. One can argue they’re all variations on Neeson’s work/role in “Taken,” but one cannot deny that they all have something unique and memorable to their credit and that credit rightfully belongs to Neeson himself.

“The Commuter” follows Michael MacCauley (Neeson), a recently fired businessman who always takes the train for his daily commute. Things take a strange turn when a mysterious woman (Vera Farmiga) approaches him and says something or someone on this train does not belong. If Michael can figure out what does not belong and marks this person or object before the last stop gets off, he’ll receive 75,000 in cash. Michael accepts the money but learns the hard way there is no such thing as a free handout. He becomes tangled in a conspiracy that escalates a simple train ride into a mystery involving danger, death and a looming threat that will change and affect everything and everyone in Michael’s life; including the other train passengers.

At first this sort of sounds exactly like the “train” version of his airplane thriller film “Non-stop”, but that’s only at first glance mind you. This is far more mystery than it is macho action film bravado. The deeper Michael goes into this mystery, more questions are raised, and suspicion runs wild with just about every face he sees sitting next to him. You’re given brief scraps of clues of how big or how powerful this conspiratorial group really is and don’t get a full understanding of how serious this is until bodies start dropping. It’s not too slow but not too fast; creating an effective mix of pacing and palpable tension that keeps you invested the moment Michael regretfully picks up that bag of promised money.

Neeson usually plays a character that has some military or professional training that makes him instantly a bad ass in just about any movie he plays. Here, it relies on him to be more subtle and investigative than fist happy. He dishes out a decent amount of tense confrontations that prove he can still kick ass no matter what role or age he’s in, but again, I applaud and appreciate the more detective based angle than relying purely on straight up “Bourne Identity” combat. The premise is simple enough to hook your attention and is intentionally designed that way to enforce a stronger sense of investment to find out what is really going on and why is all of this happening. Even when they’re teasing supposedly obvious hints of who the real bad guy and isn’t, the gradual reveal never felt too obvious or rushed; it flowed as naturally as can be.

The film does take almost entirely on the train, but the story cleverly found a way to keep things interesting. Just because Neeson is transportation locked to this one setting does not mean things remain stagnant. Each used area of the train is utilized in a creative and sufficiently compelling manner that you want to see how this all ends and find the true colors of the true criminals and see them brought to justice. I always say it helps any story if you care about your characters enough to want to see what happens to them, it’s a good gauge and indication if you’re going to be sticking with it to the very end.

One criticism I do have is the film makes an annoying habit of glossing over certain aspects that would have been more meaningful and impactful had they been expanded on, like developing Michael’s relationship with his family more and exploring the mysterious group’s intentions more clearly as well as clarifying how the scope of their power was what it was. Overall, Liam Neeson hasn’t done many films that matched the success or excellence of “Taken” but in my opinion, “The Commuter” is probably the 3rd best contender right after “Unknown.” It’s a solid, satisfying thriller that does a damn good job of balancing its use of brain power and brawn power through Neeson. He continues to prove that age is not slowing down his particular set of skills at all, and as long as his films keep this same enjoyable momentum and impact; I’ll keep watching him do this even when he’s 80.