The Verdict On “Red Sparrow:” Is It Worth Your Time And Money?? 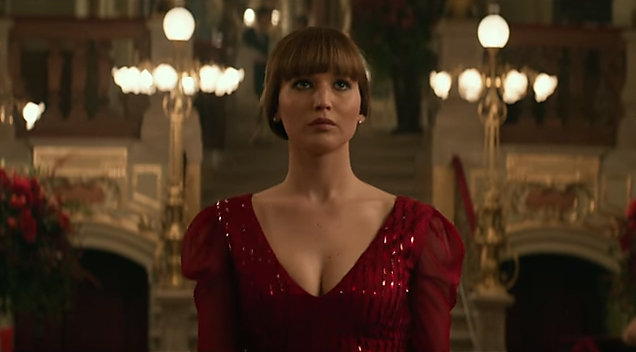 Jennifer Lawrence has always been, in my opinion, one of the greatest talents to ever grace the silver screen; both on and off camera. Beautiful, witty, down-to-earth and a practically oozing with flawless talent, she’s always been the highlight of many films; be them good or bad. Lately, though, her recent choice in films have resulted in people garnering a strange notion that she’s losing her magic touch after the disappointing likes of “X-Men: Apocalypse,” “Mother!” and “Passengers” came out (I actually liked the later to be perfectly honest, but I digress.) Now a strange, dark new vehicle for Lawrence to expand her range has emerged and gotten mixed reviews at best. “Red Sparrow” is indeed quite a different film for her, and quite a different experience to say the least. How so? Let’s dive into the bloody details of it, shall we?

A talented dancer, Dominika (Jennifer Lawrence) finds herself injured in an accident that cripples her leg and makes it impossible for her to sustain her home and giving her mother the medical requirements she needs. Enter her uncle (Matthias Schoenaerts), a very powerful figure in Russia that “helps” Dominika enter a training program to teach her the art of seduction in order to seduce, manipulate and extract vital information from a CIA agent (Joel Edgerton) about a Russian traitor helping smuggle secrets to the United States government. Now Dominika must choose who to trust and who trick if she wants to make it out of this alive and with her soul intact.

Originally perceiving this as some kind of “Bourne identity” kind of set up, “Red Sparrow” is less about gritty, realistic action sequences/fight scenes and more about brutal violence and a twisted world of espionage, traitors and patriots willing to subjugate people into doing unspeakable and inhumane things in the name of their countries. I guarantee you’ve never seen Jennifer Lawrence like you’ve seen her here before. She’s damn near unrecognizable with the intense makeup and accent, and this role brings her into the deepest, most dramatically dark depths of cinema storytelling she’s ever been put through. And unsurprisingly, she’s damn great at it.

As I said before, this film descends you into an uncaring world of brutality, violence, and sex and is most definitely not for the faint of heart. There are frequent scenes of rape, torture and intense physical violence throughout the entire film. The constant flux of twists and turns throughout the conspiratorial spy story and the escalating levels of blood-soaked carnage keep you constantly on the edge of your seat; never sure where the story is going or what’s going to happen next, but you’re always certain that things are going to get worse before they get better as far as the violence goes. “Sparrow” keeps you guessing on what’s going to shock you out of your seat next. The plot does get a little muddled from time to time and doesn’t always clarify how the next step played out, but it never got too complicated that you couldn’t catch up nor were you left scratching your head by the time the end credits roll.

Lawrence is just as on point as ever. She disappears beautifully into this character, more so than any other role I’ve seen from her (aside from “Silver Linings Playbook” maybe.) You always can sense the spirit of a fighter in her performance; sucking up what horrors she’s forced to digest in this new life, but showing her humanity and rebellion without fail and keeping us firmly invested in the fate of this wounded woman. Joel Edgerton thankfully isn’t as dull and bland as oatmeal…for once. He’s continuously disappointed me as an actor in the past (The Thing, Black Mass, The Gift, It Comes at Night), but he finally seems to be trying something different and emoting enough that I give a damn about him. We get some great support work from the brief but deliciously enjoyable performances of Mary Louise Parker and Jeremy Irons.

Despite the expected darker tone/setting, I feel the film is way too trigger happy with utilizing rape scenes; they happen like every 10 minutes. We get that the movie is dark, but this kind of bombardment of depressing sadism becomes too much at times and pushes the boundaries merely for pure shock value at times. The film also suffers from a pretty hefty running time: 2 hours and 20 minutes. While I didn’t feel bored or the film had to rush to its end anytime soon, I think a number of scenes and shots could have been trimmed down without losing anything significant. Overall, “Red Sparrow” is a gusty AND gory new film for everyone’s beloved J-Law celebrity star. She shines beautifully in a dark movie, heavily battered by too much brutality and a needlessly long running time. Lawrence always delivers great work, even if the film she stars in doesn’t turn out so great. You can call it a draw and I can call it a movie worth watching at least once, but anything after that really questions your appetite for this kind of gruesomeness.