The Verdict On “Annihilation:” Is It Worth Your Time And Money?? 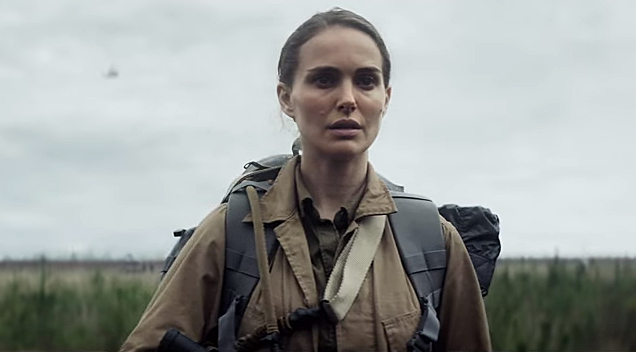 I want the public record to clearly state how much I absolutely loathed the pretentious sack of cinematic diarrhea known as “Ex-Machina” that director Alex Garland made. Everyone loved it and called it a sci-fi masterpiece, and I will despise that awful film to the day I die. So why then did I take the bait and see this director’s second attempt at another supposedly cerebral sci-fi movie when he came out with “Annihilation”, knowing full well what kind of craptacular track record he has with me? Well, I was curious by the unique look of the film, and since this film is based off a book (meaning someone else took on the story reigns), that meant that it could be something worth watching since Garland was merely adapting a story and not creating it himself.

So is this a pleasant surprise or a shame on me kind of result? Well like the film, that’s not an easy answer to produce. The story deals with a meteor hitting the Earth and creating a bizarre, dimensional barrier that alters the DNA and genetics of every living creature inside (code-named “The Shimmer”). After Lena (Natalie Portman), a biologist loses her husband (Oscar Isaacs) to this “Shimmer’s” weirdness, she joins an all-women team to venture into the “Shimmer” and find out answers for herself what happened to her husband. What they find when they enter the Shimmer is a world that will test their sanity, their survival, and their humanity; pushing them to the brink of entering an existence they could never have imagined experiencing.

While the irrational, mind-bending nonsense has a more reasonable footing to stand on here due to the dimensional elements than it did in “Ex-Machina,” despite everything these characters and twists/turns go through; it all ends up still being a great big heap of just that…nonsense. The film sloppily mixes psychological surrealism and visual metaphors between monster attacks and increasing madness, never really making it clear which one is dominating nor which has enough impact power to make heads or tails of this movie hollowed message. For a film full of striking visual flares and symbols, the movie’s foundation is forged firmly on cold, empty and unfeeling grounds. The overall tone of the movie is about as pleasant to experience as a hammer to your eye socket.

I can forgive the senseless weirdness considering the director and the way the story allows it to flow naturally, but the elements that work best vanish too quickly and the elements that don’t work overstay their welcome and drag it out to uncomfortably painful lengths. The “monster bear” sequence is the film’s most intense and compelling section of the narrative; it comes out of nowhere almost and perfectly melds when the characters are losing their minds and aiming guns and accusations towards each other. It’s dark, violent, bizarre, and mysterious and it was the first and only time the movie honestly kept me hooked. Everything that followed strayed further into the psychobabble; becoming more absurd, annoying and just numbed me from feeling anything other than contempt.

While the performances of Isaacs, Portman, and others like Tessa Thompson and Gina Rodriguez are commendable, Jennifer Jason Leigh is so robotic and deadpan I can’t even stand it. I don’t care if that’s how her character was in the book or this was intentional; it flat out sucks and is the prime example of this film’s biggest problem: nobody cares. The entire crew has little to no personality, and any personalities they do possess get quickly forgotten the minute they enter the Shimmer. Part of what made “Aliens” such a fantastic movie was the genuine interest and investment you have with the characters. We know they’re all soldier cannon fodder for some Xenomorph’s diet plan, but we learn enough about them that we like them and actually give a damn when they give a damn about being mercilessly slaughtered.

Here, everyone is sterile and unfeeling; everyone is so disconnected and broken they don’t even care if they die going into this weird world, and thus; neither do we. I understand a little bit more of what the overall point of “Annihilation” was than I did with “Ex-Machina,” but that doesn’t mean I like it any better. Overall, “Annihilation” sports some impressive visuals and a few cherry-picked quality actors who deliver without fail. Everything ELSE though fails miserably. The warped visuals are flashy distractions from a frigid, unfeeling cast and message that is so bleak and drearily broken; I can’t find a reason to care about anyone or anything that happens in this movie, and certainly not enough to figure out the ending.