The Verdict On “The Strangers: Prey At Night:” Is It Worth Your Time And Money?? 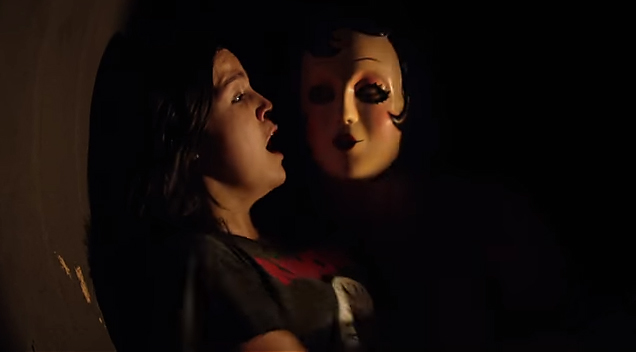 The original “Strangers” movie was one of the scariest movies I’ve seen in years. It was so real and gripping that I started looking outside my windows at night to make sure no one was there for weeks. The film was rated well and did very well financially…so imagine my surprise when I realized it’d been a whopping 10 YEARS since the original came out. The ten-year gap left me concerned about the quality since sequels with such a long distance tend to show their age and suffrage (Jeepers Creepers 3, Zoolander 2, and Bad Santa 2). “The Strangers: Prey at Night” is a sequel without any of the original actors, writers or director. It has all the markings of an expected failure, and it wasn’t even that high on my must-watch list, so…what went wrong? Surprisingly…not much.

A family of four (Christina Hendricks, Martin Henderson, Lewis Pullman and Bailee Madison) travel out to a relatives trailer park for some quality bonding time until their youngest daughter is sent off to reform school. They find the trailer park is deserted, their relatives dead and worst of all; 3 masked psychopaths who wish to add the vacationing family to their body count. Now the killers are on the hunt for new prey and the family must step up and embrace their darker sides if they want to survive the night and stop the three killers from killing again.

As well made as the original film was, I must confess that I find it extremely difficult to watch. “The Strangers” is a hopelessly bleak, grim film that makes it all but impossible for its characters to survive their terrifying situation. I have trouble enjoying movies that are hopeless; it makes everything feel kind of empty when I know there’s no possible way for a turnaround to happen. “Prey at Night” does have traces of that bleakness but thankfully, it gives its victims a fighting chance and creates some gripping and satisfying sequences that keep you guessing on who is really going to make it out of here alive by credits end. It was obvious in the first film, here; not so much.

The dysfunctional family doesn’t really offer much regarding depth or originality. They’re not bad, but they’re not standout interesting either. It’s fairly clear who is wearing the hero’s pants in this film, and once the killing starts, it skips from predictable to shocking and surprising. It’s still gruesome, still bloody and full of creepy chills as our masked trio turns the trailer park into a bloodbath. But “Prey at Night” doesn’t rely on silence to be scary like the first film, this time the use of music is actually quite prevalent, and it creates an oddly enjoyable new element I never would have thought would have worked. The killers constantly play 80’s music throughout the film. It sounds like an odd inclusion, but it gives the more tense scenes an ironic sense of fear and distinction the first film couldn’t accomplish with it’s audio.

It’s one of those things that can’t really be explained but has to be seen to understand. I’m sure it sounds completely out of place from how I’m describing it, but it works incredibly well, and it makes the music feel like it’s as part of the killers as much as their iconic masks are. There’s some truly great visual execution with certain scenes, like one of the killers attacking the son near a swimming pool and a burning car chasing the daughter on a bridge. The film does suffer from some expected horror movie clichés: no phones working, cops killed easily and people making stupid decisions or leaving crucial things behind when they should be sticking to them like glue.

Some are forgivable; everyone thinks it’s easy to make split-second/life and death decisions and expects horror movie victims to react with lightning fast reflexes to every horrifying situation. The fights against the masked killers are handled well enough I can forgive some horror movie victim stupidity, again, feeling a sense of actual hope and potential victory in a deadlocked situation like this helps build investment in seeing how it all plays out and being surprised. Overall, “Strangers: Prey at night” had way more effort put into it than I was expecting and for a sequel to come out ten years after its predecessor with none of its returning people, this film really impressed me. The music was excellently utilized, the fear and intensity were heart stopping and the film improved on the bleakness from the original; creating a consistently more compelling fright flick that has more going for it than I think people will give it credit for.