The Verdict On “A Quiet Place:” Is It Worth Your Time And Money?? 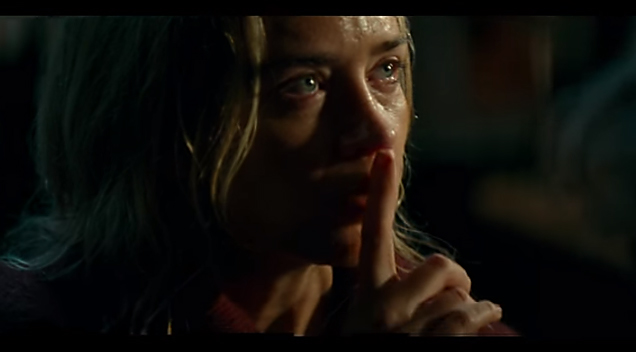 In a day and age where sequels, comic books movies, remakes and reboots are dominating movie theatres frequently; one has to give mad respect and acknowledgement to a director with a vision for a truly original piece of work. Originality is practically an extinct concept since everything has seemingly already been done by everyone. Leave it to the raw talented mind and acting skills of “The Office” star John Krasinski to deliver a gripping, thrilling and a masterfully crafted film that pushes things to a whole new level and proves that thinking outside the box on a cheaper level can produce mad money and mad talent when handled properly. “A Quiet Place” is THAT kind of movie.

The world becomes overrun by a race of nigh unstoppable, murderous monsters that hunt and kill all life based purely on sound detection. They can track and kill anyone and anything by even the smallest sound detectable. A family (John Krasinski, Emily Blunt, Millicent Simmonds and Noah Jupe) struggles to survive by being as quiet as humanly possible. But with the mother pregnant with a new child and any sound triggering the monsters to their location in minutes, how will this family survive when one sound can end everything they hold dear?

Not only was this directed by Krasinski but also stars his real-life wife Emily Blunt and uses a real deaf actress (Millicent Simmonds). All of these factors, as well as the brilliant use of sound, silence and tension building; create one of the most unforgettable movie experiences of the year. This isn’t a gimmick or some kind of one trick pony that gets stale, the use of silence and sound creates a chilling atmosphere that maintains a constant sense of tension and terror because you never know when the next sound is going to pop up and bring certain death upon our small but talented cast of characters. It’s amazing how much is accomplished with so few faces and even fewer lines of dialogue. Majority of the film’s duration is filled with natural sounds and conversations done through sign language. There are only a few times the characters actually speak, but the emotions they express reveal far more than any spoken word could accomplish.

There is an especially chilling scene when Blunt starts receiving contractions and the tension surrounding her trying to be quiet while the monsters are inches away from here is so thick; you can cut it with a knife. Krasinski and Blunt’s natural chemistry together shines beautifully; even in the darkest moments of the film’s narrative. They have a believable connection that you can truly feel existing in such a bleak and terrible world such as this one. Very little is said about how these monsters came to be or what they are or where they came from, and in truth, it works just fine that way. They’re chilling enough without a backstory, and their instantaneous reaction to sound makes each noise a chair-gripping moment that leaves you gasping for more.

Young actors can often be a burden in a film. It’s nothing against them since they obviously are so inexperienced you can’t expect 4-star acting, so it’s nice when you see young actors going above and beyond the call of duty to deliver some truly stellar work at such an early start. This script is loaded with creativity. The family keeps surprising you with new ways to mask their presence and live without making a sound. The film does so much with so few people and such a small budget. The money clearly all went to designing the monsters and it allowed the locations and cast to be utilized to perfection without overloading you with too much of either. The beginning of the film hits you like a ton of bricks and sets everything you need to know with supreme excellence.

One complaint I did have was a sort of missed opportunity with exploring the effects of the monster invasion to the rest of humanity. There’s slim to no focus on any other humans outside of the primary family, and since it was established the world fell to these sound monsters, it feels like a missed chance to explore other damaging psychological effects on humanity and show how others have been surviving or NOT surviving this global threat. I know I applauded the small cast and excellent focus on the family, but I still feel a little bit more exploration with some other people trying to ride this monstrous Hell storm out would have been nice to see.

Overall, “A Quiet Place” is a truly impressive accomplishment for any director, let alone one who is still green as Krasinski. The small setting, cast size and use of sound/silence is truly astounding and creates a whole new world of tension and horror never really thought possible. The monsters are a terrifying work of art, and the use of real-life married couple Blunt and Krasinski as well as deaf actress Millicent Simmonds just creates an unforgettable cinematic experience that truly stands out as one of the few original movies to come out in 2018.