The Verdict On “I Feel Pretty:” Is It Worth Your Time And Money?? 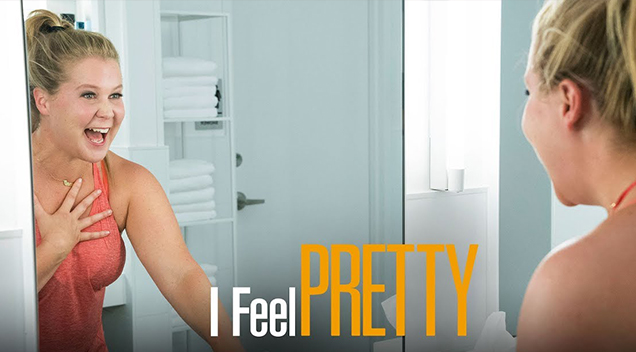 Amy Schumer is one of the most well-known and admired female comedians working in Hollywood today. She’s vulgar, crass and is brutally honest about how she fits into today’s modern depiction of women; both in comedy and in movies. “Trainwreck” was her debut movie, and it was a hilariously amazing film that never failed to deliver the laughs, the feels or the truth; all of which Schumer excels at without fail. “I Feel Pretty” is a soft dab in the same pallet she typically dabbles in, but with a much tamer tongue and a message that feels like it’s her usual song and dance but comes off as more…confusing than encouraging.

Renee Bennett (Amy Schumer) is a low-level employee for a cosmetic company she wishes to work higher up the corporate ladder for. Unfortunately, she feels her looks, and weight limits her options and attempts to work out and improve her low self-esteem and confidence. After a head injury makes her think she’s the most beautiful woman in the world, her new confidence boost takes her higher in life than she ever thought possible. But what happens when she eventually realizes her appearance never changed at all, and how will that change her old and new relationships?

This is a hard movie to gauge rating wise, and it’s even harder to explain why it’s hard to gauge. Practically all of the humour relies on the fact that Renee’s physical appearance is exactly the same, yet she exudes supreme confidence, and everyone is too confused or too awkward to question it. This gave me the half expectation of someone going to shatter her world by countering her high opinion of herself and everyone is just playing nice because the script says so. But then it made me scratch my head and wondered: how would someone actually react that way to someone who is not “typically” viewed as gorgeous, would they smile and nod towards all their exuberating confidence or be rude and deny it adamantly?

Which brings me back to the humour, the fact that it’s softer and tamer than Schumer’s usual routines and films isn’t a bad thing; it just doesn’t hit the right marks that I think her brutally honest brand of humour usually strikes. Schumer’s use of physical comedy works far better here than any of her snappy one-liners do. Her competition at a strip club was easily the funniest scene-stealer in the film; it worked well with her message, her brand of humour and her natural flair for physical comedic timing. The rest of the story and even the characters are pretty generic, typical rom-com fare that does little to leave you with an impactful memory or performance; with the exception of Michelle Williams’ unexpectedly amusing high voice.

At the end of the day though, I can’t get past the biggest problem “I Feel Pretty” has and it’s the contradictory message it presents. Schumer has always been a star supporter of natural beauty, appreciating your body and feeling pride for who you are, how you look and to accept your flaws as well as your pros. “I Feel Pretty” seems to convey a message that says you need to get a concussion in order to feel confident and comfortable enough in your own skin. One could see this message as a double-edged sword; indicating Renee is delusional for seeing herself as gorgeous after receiving the blow to the head and those that are not as “pretty” or “good-looking” as others are delusional if they have confidence in their appearances.

This film also suffers from the same misplaced sense of humour Paul Feig’s failed female “Ghostbusters” movie brandished. Like Schumer, Feig excels at dirty, gutter trash vulgar humour; R Rated all the way without any restrictions or milder punchlines. It could be Schumer just doesn’t hit the same funny bones outside of an R rated setting. I hate comparing this to “Trainwreck”, but it shares A LOT of the same values, points and tropes Schumer is using here and I cannot deny just how much funnier and better it worked in that movie opposed to this one.

Overall, “I Feel Pretty” is not a bad film and it has a good message buried in there somewhere. It doesn’t do anything extraordinarily bad but neither does it do anything particularly impressive or noteworthy either. This is a forgettable film; it won’t last long in your memories or your DVD players for that matter. I commend Schumer for sticking to a noble comedic cause, but she’s done better, both on the big screen and on the small screen. If she’s really your weapon of choice, then give this film a watch, but I highly recommend checking “Trainwreck” out first.