The Verdict On “Super Troopers 2:” Is It Worth Your Time And Money?? 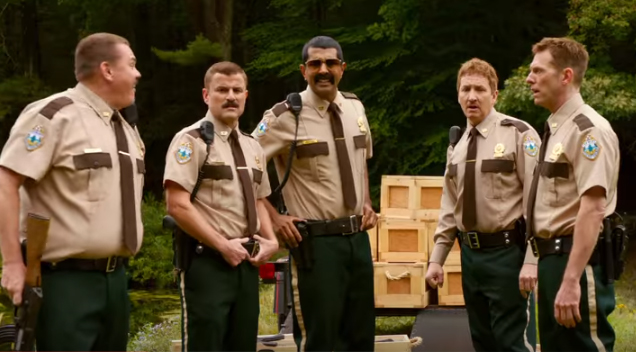 There’s an old saying that goes: strike while the iron’s hot. When it comes to movies, making a sequel can be a time-sensitive issue. You have to keep things fresh and current otherwise people will forget about a particular film, and more importantly, forget about desiring/expecting a sequel to come out. A number of films have had very LATE released sequels, all of them facing mixed to negative results. “Bad Santa 2,” “Zoolander 2” and “Jeepers Creepers 3” came out 10 to even 20 years later than their predecessors and by that time, people lost interest, and the results were far less interesting or entertaining than even the most dedicated of fans had hoped for.

A similar delayed fate befell the sequel to Broken Lizard’s cult comedy hit, “Super Troopers.” While that film came out in 2001, its much anticipated and awaited sequel didn’t make it to theatres until 2018; nearly 20 years later! Whatever the reason for the delay, it’s hard to know for sure but in truth; no one really cares so long as the product is worth the wait. Those other films proved that time had not aged their long desired sequels well, does “Super Troopers 2” age like a fine wine or more like a keg of beer? Considering its disastrous run at the box office most would say the later, but the first was never a big hit either so let’s wait and see.

After losing their jobs as local police due to the “Fred Savage incident” (don’t ask), our favorite Troopers: Thorny, Rabbit, Mac, Foster, Farva and their Chief (Jay Chandrasekhar, Erik Stolhanske, Steve Lemme, Paul Soter, Kevin Heffernan and Brian Cox respectively) get a lucky break when a border dispute arises between the U.S. and Canada. Now the Super Troopers are tasked with establishing a Highway Patrol station in the disputed area and dealing with the usual: drugs, corruption, rude cops and a whole “litre’s” worth of shenanigans you’ve come to expect from them.

It’s damn near impossible to recapture the inexplicable magic movies produce sometimes. And while this film does suffer from a lot of overly unnecessary extra crude content and a few other details, for the most part, “Super Troopers 2” manages to reproduce enough comedic sparks to keep the fire going even after all these years. The cast is just as funny as they were before; having lost little to none of their physical comedic skills or quippy one-liners. Their pranks and bizarre “pull over stunts” are back in top form and definitely hits a few more chuckles than even the first one did. However, certain characters feel a bit mishandled this time around, and others (like Marisa Coughlan) barely stick around beyond a mere cameo appearance.

Chandrasekhar gets saddled with this weird reoccurring joke that just…gets weirder and less funny the more he does it. Out of all the stupid, nonsensical crap these characters go through, this one feels less like a naturally suited gag and more like something they pulled out of a hat. Heffernan was an unexpectedly obnoxious delight in the first film, but here Farva is just…obnoxious…all the time. We see too much of him, and his brand of humour is not a flavour you can stomach for long periods of time. “Super Troopers” knew to use him sparingly and at the right times and moments, “Super Troopers 2” figured more Farva means more laughs…and instead just gave the audience more groans. The plot is essentially the same as before too.

Part of the problem with the humour falls into its location; Canada, the first half of the movie is a non-stop America sucks vs. Canada sucks bash match that stops being funny about 10 minutes into it. The gang is at their best and funniest when they are doing the stuff they were good at, like pulling people over and messing with them or pulling absurd pranks on their rivals in uniform. They have all of that here too, and when it’s onscreen it is GREAT, it is dying of laughter great. But when it’s gone it’s noticeable and your left hoping they’ll go back to doing what they used to do all over again just in Canada because a dumb and lazy at that sounds; it’s at least funnier than when they try too hard which is throughout most of the movie.

Thankfully, we got some hilarious newcomers from their Monty rivals (Will Sasso, Tyler Labine and Hayes MacArthur) who bring some new flavorful fun to the mix. Overall, “Super Troopers 2” was a long time coming, but it was definitely worth the wait; at least more so than all the other sequels that took 20 years to get their act together. The film does its best work when it’s doing its old work and trying too hard to be new or up the ante backfires more times than it succeeds. It’s worth a watch but maybe not buy unless it’s a twin “Super Troopers” movie pack or something. I’m glad I saw it but I just wish they stuck with the basics instead of crossing the border.