The Verdict On “Rampage:” Is It Worth Your Time And Money?? 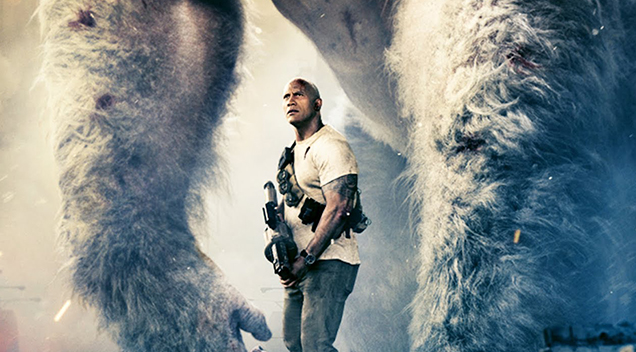 Video game movies have a notorious reputation for being really awful, poorly written pieces of trash that warp and waste so much of the source material; by the movie’s end it hardly even looks like the game it was supposed to be based on. Adapting complex game material rarely translates well onto the big screen. The same problem, however, doesn’t apply to simpler video games with little to no plot; case in point: “Rampage.” The “Rampage” franchise couldn’t be simpler to explain: you play as one of 3 giant monsters that go around, wrecking the city, kicking tanks and gobbling up hapless citizens. You play as either a giant lizard (Lizzie), a giant wolf (Ralph) or as a giant gorilla (George). Pretty straightforward, wouldn’t you say?

With the star power of Dwayne “The Rock” Johnson’s name, the director of “San Andreas” slapped together a (slightly) more complex story and turned a mindless monster game into a mindless monster movie. Sounds a lot more insulting than it actually is, in truth, it’s quite positive in that respect. Primatologist Davis Okoye (The Rock) shares an unbreakable bond with a hyper-intelligent, albino gorilla named George since the ape was born. That bond becomes tested when an illegal experiment falls from a crashing satellite and transforms George into a giant monster. George escapes, and Okoye must work with a discredited geneticist (Naomie Harris) and a smart-mouthed government agent (Jeffery Dean Morgan) to save George and the city of Chicago from being destroyed by a mutated giant wolf and crocodile as well.

With a video game plot as mind-numbingly simple as this one, any story material added can only expand on it. I won’t even try and pretend this movie is some kind of hidden gem or that it’s the greatest video game movie ever made; it’s not and it isn’t…but it is easily the best HONEST video game movie ever made. “Rampage” is unapologetically stupid and revels in its madness with a smile on its face and a middle finger raised high in the air. It knows what kind of movie it is, and it’s every bit of silly, stupid and fun as you expect it to be. You know what you’re getting when you walk through the front door so don’t bother complaining about being misled.

This is all about the giant monsters and watching them eat people and wreck every building, forest and city unfortunate enough to be in their path. Everything beforehand is fluff, meandering between forgettable supporting characters and an uneventful plot. However, our main cast of the Rock, Harris, Dean Morgan as well as “Godzilla” rejected villains; Malin Ackerman and Jake Lacy, play their parts to with delightful amusement and enjoy their roles thoroughly from start to finish. Nobody cares the Rock is essentially playing himself or that Jeffery Dean Morgan is just mimicking his “Negan” role from “The Walking Dead.” We know this, and we don’t care because they’re the right amount of ham and cheese this monster mash needs to stay fun and fresh.

Despite the B movie feel/angle, we experience a surprisingly decent amount of emotional moments between Okoye and George. Their relationship never feels or forced for the sake of the plot. We feel their connection, see their struggling and empathize with the bond they share; even when inappropriate sign language gestures are being flaunted. But the real reason this goofy game got greenlit was that of the finale. All three monsters enter a brutal battle royal that puts most of “Godzilla’s” movies to shame. It’s fast, crazy, frantic and just comes out; guns a blazing and the fires don’t stop until the credits roll. It’s the chewy centre of the tootsie pop everyone came to enjoy, and it does not disappoint. Many will say everything was a marginal prelude to the creature feature throw down at the end, and they’re not entirely wrong, but that doesn’t mean everything beforehand wasn’t worth experiencing.

Overall, “Rampage” is upfront, loud and clear about what kind of movie it is and who it’s trying to entertain. It’s a giant monster slug fest that happens to have the Rock and Negan chewing up the scenery; having a few kicks for all to enjoy. Aside from underusing a potentially intriguing character played by Joe Manganiello, this movie delivered the pie to the face I was hoping for, and its flavour didn’t disappoint. With spectacular creature designs and enough campy goodness, “Rampage” may be a dumb ride but it’s a ride I’d gladly buy tickets to again and again.