The Verdict On Ideal Home: Is It Worth Your Time And Money?? 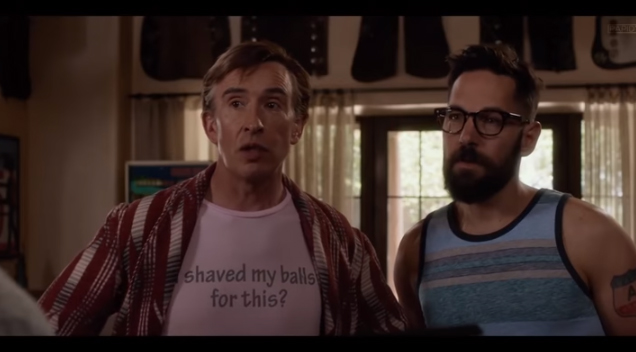 “TACO BELL! TACO BELL! TACO BELL!” Where not words found in the vocabulary of Erasmus (Steve Coogan) and his partner Paul (Paul Rudd.) Paul is a producer and director of a long-time reality kitchen show for the well-known celebrity, Erasmus, who also happens to be his lover and partner. It was a warm and crisp evening, where Paul decided to throw Erasmus a fancy dinner party for his birthday with their elite work colleagues and dearest friends. In the middle of their third course, to which there was supposed to be another eight meals to go, a birthday surprise arrived in a form of a little child. He was timid at first and tugged the jacket of the first woman that he saw. The little boy gave her the wrinkled note that he had in his plastic bag and asked the woman to read it. To her utter disbelief, she calls out to Erasmus and proclaims that the note that she had just read was actually not just a random little boy but actually Erasmus’ estranged grandchild. Paul looked straight at Erasmus with utter scepticism and confusion, and wondered how this could have occurred? ‘Did Erasmus lead a double life that I did not know about? Why was he hiding this massive family secret from me?’ Paul wondered to himself. Erasmus then politely asked his guests to leave and apologized for this rather dramatic and abruptly finish to what was supposed to be a night of laughs, fine dining and celebrations. The young child helps himself to the fancy cuisine and tastes the drinks scattered around the table while Paul and Erasmus begin an extremely heated conversation in their living room. After a long discussion, it was discovered that when Erasmus was still discovering his sexuality, he had slept with a woman who he also accidentally impregnated. He knew of his lovechild with this woman but was not a part of his life due to his flamboyant nature. Which then lead to the present news that his long-lost son (the child’s father) was actually imprisoned. The little boy was sent to his grandfather’s house (Erasmus) to be looked after due to his father’s criminal activity.

Ideal Home was written and directed by Andy Fleming who states that this film was the “most personal movie I have ever made.” He refers to the storyline to be fictional but loosely based on his real-life encounters that he has been through. Producer Maria Teresa Arida and Director Andy Fleming have been working together for nearly a decade to turn the original notions of the film to the assembly. Arida proclaims, “we wanted to tell a story about how families come together the way they can.”

Ideal Home will break barriers for the LGBQTI community worldwide. Rudd and Coogan are impeccable in their roles of Erasmus and Paul. The story plot of the film is recommended for mature audiences but is cleanly executed to keep the viewers entertained. The script is written well and is constructed in a way that not only their target audiences can relate to, but also families from a range of nationalities and demographics can as well. I applaud both Arida and Fleming’s work in directing and producing a film that clearly reflects the origins of the film’s original plot.