The Verdict On “Solo: A Star Wars Story:” Is It Worth Your Time And Money?? 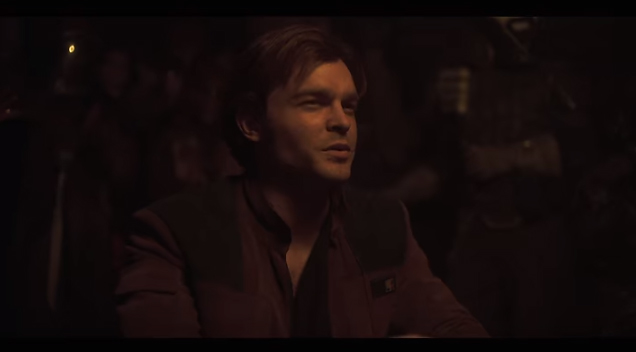 Ever since Disney acquired the “Star Wars” franchise, the influx of new “Star Wars” movies has been skyrocketing with at least two new “Star Wars” movies coming every year or so. Now, not only do we have the expected trilogy launching new films like “The Force Awakens” and “The Last Jedi,” but we also have spinoff movies detailing past events/characters in the “Star Wars” universe; starting with the highly successful “Rogue One” and continuing with the mixed reception (at best) to the newest spinoff entry: “Solo,” detailing the beginnings of everyone’s favorite smuggler from the original trilogy; Han Solo made famous by Harrison Ford.

Taking place before Luke and Obie-Wan, Han (Alden Ehrenreich) is a young man with a dream to be a pilot and steals with childhood friend/girlfriend Qi’ra (Emilia Clarke) in hopes of making it big on their own and traveling the galaxy. After being separated, Han meets up with a band of smugglers lead by Beckett (Woody Harrelson) and future best friend Chewbacca (Joonas Suotamo) and joins them on a quest to score big from Lando Calrissian (Donald Glover), so he can make the money he needs to free Qi’ra from the clutches of gangster Dryden Vos (Paul Bettany) and make a name for himself as a great pilot, pirate, smuggler and all-around hero.

The story of how the plans for the Death Star were acquired by the Rebellion sounded like an unnecessary story to tell. However, “Rogue One” told it with masterful execution and provided to be the perfect connecting entry to the Star Wars legacy. “Solo” was also another story we didn’t really need and nobody asked for. Unfortunately for “Solo,” the movie wasn’t solid enough to warrant its existence and overall general look and feel of the film’s marketing didn’t help either. “Solo” feels like the kind of movie you pumped out for the sake of filling a quota; not for telling a story anyone felt really needed to be told. Much as we all love Ford’s iconic nerf herder, I don’t feel I gained anything meaningful by seeing the Kessel run in action; I think it worked better as just a story we heard him talk about.

It also doesn’t help that the script was pretty flimsy, the jokes were dry as sandpaper and most importantly; the lead just doesn’t do the role or himself any justice with this performance. Ehrenreich feels like he was only picked because he kind of looks like Harrison Ford because he sure as Hell can’t act like Ford. Everyone else around him does a far better job at stealing the spotlight with memorable performances. Harrelson, Glover, Clarke, and Bettany do great with what little chances they have to shine. Paul Bettany especially deserved far more attention with his unique and unusually charming gangster role. There are some impressive visuals and an amazing train robbery sequence that stands out, but other than that, much of this film is as vanilla bland-by-the-numbers as you can get.

The most impressive moment that truly absorbed my deflated attention was a surprise cameo appearance (which I won’t spoil) that was so jarring; I was obsessed with wanting to learn more and my interest in the rest of the movie just kind of fell by the wayside. All of this generic blandness just makes me wonder what kind of movie the original directors had in mind for “Solo.” Ron Howard directed this film but it was originally being handled by Phil Lord and Chris Miller; directors of “The Lego Movie” and “21 Jump Street.” They were about 75% finished with their cut of “Solo” when Disney fired them after producers reported the duo was turning Han Solo into Ace Ventura. I thought that sounded horrible when I first heard it, but after seeing how hollow the humor was in Howard’s cut; I can’t help but wonder if Lord and Miller could have made this something special and less forgettable.

Overall, “Solo” was a movie nobody wanted, nobody needed and based on the script and the cardboard cutout efforts of the film’s lead; nobody working on it asked for this movie either. I don’t blame Ron Howard as he was saddled with the arduous task of flipping an entire movie on its head and basically starting over from scratch. The final result is okay and it could have been a lot worse in far lesser hands, but that still doesn’t make this a worthy or even a watchable entry in the Star Wars universe. The supporting cast deserves all the credit and Ehrenreich deserves fewer opportunities to be had. “Solo” is a rental at best, not bad enough to be considered “Prequels” bad but not good enough to warrant many multiple viewings either.