The Verdict On “Jurassic World: Fallen Kingdom:” Is It Worth Your Time And Money?? 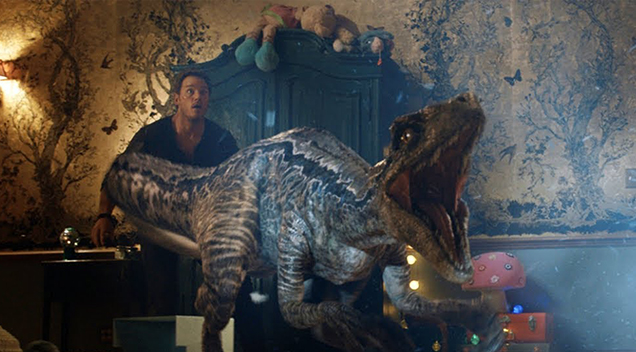 After so many disappointing “Jurassic” sequels since the iconic original, I was supremely impressed with “Jurassic World” and how it breathed new life into a franchise seemingly devoid of all hope and quality. Three years later and a new director on board, humanity’s interference with nature occurs once again with a sequel that seems eerily familiar to “The Lost World” but is still very much a “Jurassic World” movie as well as it’s “own thing” all rolled into one. That probably sounds overly complicated but when it comes to “Fallen Kingdom,” you’ll find simplicity is strongly favored over complexity.

After the collapse of the park, Claire (Bryce Dallas Howard) learns that the island’s volcano which was believed to be inactive has started erupting and now all dinosaurs left on the island are on the verge of a second extinction level event. She convinces Owen Grady (Chris Pratt) to join a rescue expedition to save the dinosaurs before their wiped out, including Blue; the raptor he trained since birth. Claire and Owen quickly find out the situation is not as it seems and a ruthless conspiracy is discovered that could change the futures of humanity and dinosaurs alike and only Claire, Owen and their friends can make a difference in stopping it.

“Jurassic” as a franchise as a whole is fairly easy to craft: create situations with humans and dinosaurs and acknowledge time and time again how humanity’s meddling pisses nature off something fierce and make the whole thing bite em in the ass (literally) for it. “Jurassic World” showed us what a functioning park would look like, a simple idea with an effective wild card (Indominus Rex) that mixed well and created a natural, evened entry into the series timeline. “Fallen Kingdom” however takes the recurring theme of chaos quite literally and tries to juggle many ideas at once; so much so you don’t know which story element is going to dominate and where each one will begin or end in any kind of structured order.

Much like “Lost World’s” thrilling cliff scene with the truck falling through the main heroes, “Fallen Kingdom” pops its balloon fairly early with a heart-stopping volcano sequence that just takes your breath away and unfortunately, the film never quite measures up to that level of intensity again. Not to say the rest is lacklustre. Once you get past the slow grinding pace of the middle, the latter half presents a unique experience with the dinos that hasn’t really been experienced before. The introduction of newly engineered beastie; the Indo Raptor, presents a great villain that hits its mark without fail. It could have come in even earlier in the film if the story wanted to make the best use of it.

Howard and Pratt return with most of their charm and humour intact, however “Fallen Kingdom” is a much darker tale than the previous film and the drama sometimes overwhelm the equalizing humor the previous film utilized so well. The remaining new characters really don’t feel like they naturally belong to this universe; they feel like generic action figures you can fit into any playset or story and you couldn’t tell the difference. This movie’s primary selling point is the action; it’s all about the razzle-dazzle dino carnage displayed on some gorgeously iconic new imagery and camerawork that creates many memorable new scenes to immortalize on film; especially one involving the Indo Raptor sneaking into a child’s room towards the end.

While that’s all well and good, despite the franchise being a summer blockbuster series; none of the characters ever felt stupid enough to make me feel like I’m watching a brain-dead popcorn flick…until now. Towards the end, the majority of the characters (mostly bad guys) do monumentally stupid things that would make slasher movie victims look like freaking geniuses. Even when “Jurassic Park 3” hit a new low for the series quality, people were never THIS stupid or pulled THAT kind of idiocy that takes you out of the movie. There are choices being made here that leaves everyone scratching their heads. It’s not everyone and the effects, the action and the intense chase sequences create some of the best thriller sequences in the series, but it just feels like an obvious IQ adjustment that should have been corrected.

Overall, “Jurassic World: Fallen Kingdom” is much better than “Lost World” or “Jurassic Park 3”, but not as good as “Jurassic Park” or “Jurassic World”; it’s basically stuck in the middle. Seeing Pratt and Howard in action together was a delight, the volcano sequence was unbelievable and there are some really neat new ideas explored in the latter half as well as the Indo Raptor. But the new characters are forgettable, the pacing and narrative are all over the place and people felt like they became stupid for the sake of an ironic carnage comeuppance sequence that just loses credibility. Overall it’s a fun entry; nothing more to it or against it but it’s still a fun summer ride either way.