The Verdict On “The Meg:” Is It Worth Your Time And Money?? 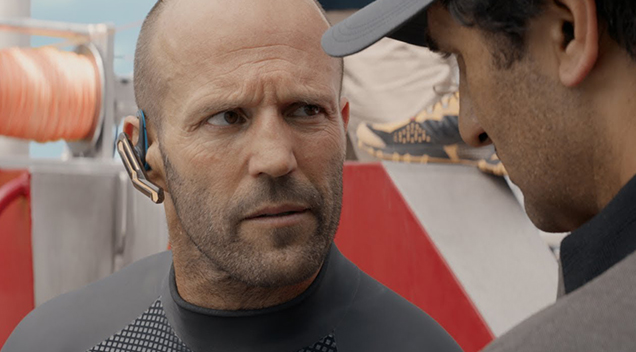 Believe it or not, this fairly obvious “Jaws” knockoff has been in development for several years and has been trying to get off the ground into production. Apparently, the star power of Jason Statham and directing styles of Jon Turtletaub (“The Sorcerer’s Apprentice”, “National Treasure”) was the last kick the movie needed to get its ass in gear because production rapidly accelerated once those two names were announced.

Based on a book of the same name, the approach to the story’s styles has changed as frequently as the people attached to it. “The Meg” has gone from horror, action, thriller, comedy to science fiction. Turtletaub tried to combine 2 of those genres together and the result is…well…let’s just say the waters are a bit too murky to make it clear.

Five years ago, Captain Jonas Taylor (Statham) came across an unknown underwater beast that caused him to flee his ship and leave half his crew behind to die. Now he’s being called in by oceanographers Suyin (Bingbing Li) and Mac (Cliff Curtis) who say Taylor’s ex-wife is trapped at the bottom of a newly discovered ocean reef and is running out of time. During the rescue attempt, Taylor comes face to faces with the beast he came across 5 years ago: a giant prehistoric shark known as the Megalodon. Now the man-eating beast is loose in public waters, and Jonas must face his fears and use everyone and everything available to stop this monster for good.

“The Meg” was heavily marketed as a very “Jaws” similar kind of flick: a big summer blockbuster film about a monster shark being hunted as it devours everything and everyone in its path, oh and it stars Jason Statham. Though despite being about a prehistoric shark, this film really didn’t understand what kind of animal it was trying to unleash. The film, for the most part, plays like an action flick with bits of comedy thrown in here and there. Other times though, it feels like they were going for a more horror-oriented monster animal flick with science gone wrong, corporate greed and of course; Jason Statham. I keep mentioning his name because it feels like this was the only thing that really got people into theatres or got this movie made.

This film is a mixed bag and is unclear what audience it’s trying to target or how far it can go with certain aspects. I read interviews that the director toyed with making the film more bloody and violent and R rated, something that is typically associated with shark films considering how vicious these animals can be. He said he wanted to keep a comedic/light-hearted side to the film to draw families in with a PG-13 rating. The result is a film that doesn’t have the guts to be gruesome but lacks the funny bone to be an effective smile generator. It’s a monster movie that takes nearly a half hour for the monster to come into play and spends too much time developing characters we already know are starring in a B grade blockbuster that never required much brains or depth to begin with.

To be fair, Statham and Li are actors and characters worthy of that development as they represent the two best components of the film. Their strong-willed, determined and they make an unusual connection that strikes more than a couple of sparks with their chemistry. The rest is acceptable, but you know a script feels watered down when they can’t figure out how to write the talented Rainn Wilson in a decent role. This film shows no sign or indication it took years and years to get off the ground, it looks hastily slapped together and is inwardly confused on what kind of tone it’s trying to set.

Overall, I can’t say “The Meg” is a terrible movie, but I can’t say it’s a genuinely good movie either. It just doesn’t know what it wants to be or how to market it properly. There are a few positive components here and there but to make this film memorable, a major overhaul would be needed, and even if that was done, I can’t say for certain if going hardcore violent or sticking to its soft core roots would have made this film any better. It’s by no means “Jaws”, but it’s also not bad enough to be lumped in with “Sharknado,” so that ultimately leaves the movie right where they found the ancient shark: in underwater limbo.