The Verdict On “Searching:” Is It Worth Your Time And Money?? 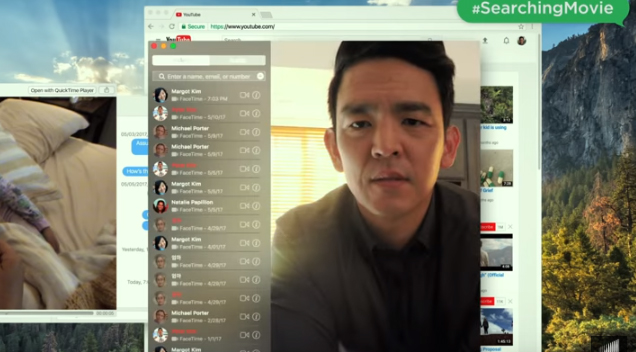 Filmmakers are always looking for new ways to reinvent the wheel. With new technology, effects and techniques to utilise as tools become more and more sophisticated, even every day web tools and services such as Facebook and Skype can create exciting platforms for movies to use. The web horror film “Unfriended” took place entirely on Skype/video messenger screens and it now seems other films are taking cues from that film to produce a thriller film solely filmed through the use of video messenger and online services in “Searching.” It’s a simple premise with a small cast, but a great deal of top of the line graphics and effects and it uses it to deliver the right notes with the right feels and the right thrills when it needs to.

When a father’s (John Cho) daughter goes off to college in another state, he keeps in touch with his wayward daughter through video phone calls through Skype; seeing how she’s doing at school and if she’s making friends. Things become troubling when she fails to return any of his calls or messages. He enlists the help of a detective (Debra Messing) to track his daughter down and the deeper the case goes, the more he learns how truly little he knew about his daughter as the race to find her alive becomes increasingly more difficult and the fear of finding a body becomes a reality this father fears he may have to accept.

I have to say, even though “Unfriended” was the pioneering picture to use online networking to tell a story, “Searching” takes that concept and expands on it ways I never thought were possible and developed unique ways to introduce characters and tell a compelling story that continues to evolve and grow more and more intense. “Searching” manages to expel a great deal of information with the simplest of methods: online photo albums, loading pages, blogs, video streaming sites, Google maps, image searches; all common aspects of the internet that we use every day become vital instruments that introduce us to the characters and learn about their lives and actions all through digital footprints. The gradual wait for each screen to reveal a new piece of the puzzle somehow escalates the tension and aids the narrative in crafting an engaging mystery.

Admittedly, the film’s beginning montages through a great deal of emotional material that would have been considerably more impactful if we saw the interactions outside of 10-second clips and notifications to remind us something tragic or happy happened once. It’s easy to presume what happens sometimes but a lot of heart is lost in that brief montage, it doesn’t help the film’s pacing much either. Once things get rolling though, John Cho takes us through a harrowingly emotional ride that pushes his performance to new levels of depth and passion. Whether you’re a parent or not, Cho establishes a powerful connection that drags you to his lowest of lows and makes you experience every parent’s worst nightmare every step of the way.

Keeping the cast small worked brilliantly for the plot. Most films involving a mystery have numerous actors, which generate countless suspects for the audience to finger for the crime. But by keeping it limited largely to just Cho and Messing, every person involved and interviewed becomes a potential suspect. We don’t learn enough about anyone to truly know who they are or what they are capable of and it makes the discovery of the truth that much of a bigger punch to the gut. I won’t spoil it obviously but rest assured it’s a twist no one will see coming. For everything the film does right, very little is done wrong outside of the primary visual gimmick ultimately becoming just that; a gimmick. This movie lacks sufficient replay value, it’s pretty much worth a single watch and that’s it.

Overall, “Searching” takes a newish concept and expands it without expanding very much at all in terms of story or characters. The small cast and simple mystery contribute to a truly heart racing mystery that uses its innovativeness and effects to deliver an experience few films can match on this term of scale and approach. Granted, the beginning montage drags things down too quickly and skips over the real heart of the characters even more quickly. Still, “Searching” is a welcome breath of original filmmaking that should be acknowledged, respected and above all else; enjoyed.