The Verdict On The House With A Clock In Its Walls: Is It Worth Your Time And Money?? 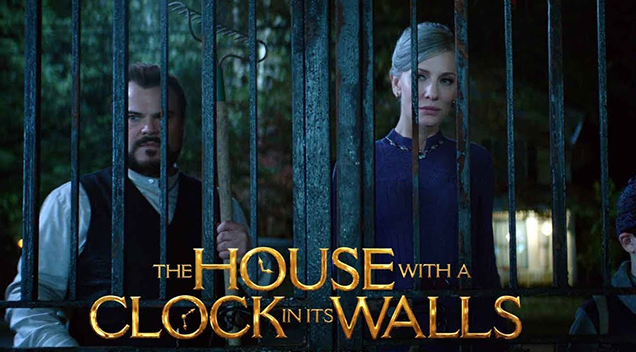 As years and films have passed, the age of fantasy books of generations past and current being adapted into films has dwindled; both in terms and in quality. Instead of the acclaimed likes of “Hunger Games” and “Harry Potter”, now we’ve been lumped with colossal disappointments such as “A Wrinkle in time” and “The Darkest Minds.” They’ve become so similar in style and approach; you can practically tell it’s a film based on a book before the trailer even tells you it is. “The House with a Clock in its walls” is a book from the 1970’s and attempts to bring very old ideas to today’s audience through the lure and lore of children’s fantasy storytelling.

Every book based film series hopes to launch a franchise and while “Clock” may have the material, I’m not exactly sure it has the staying power. Set in the 1950’s, recently orphaned Lewis Barnavelt (Owen Vaccaro) goes to live with his uncle Jonathan (Jack Black) and his close neighbor Florence Zimmerman (Cate Blanchett). He soon finds out his uncle is a warlock and his house is haunted, haunted by a magical doomsday clock a dark warlock hid inside the walls of the house long ago; ticking down to zero. Now Lewis must discover his own warlock powers and aid his new family in finding and destroying the clock before the world is overtaken by dark magic.

In a lot of ways, this film feels like prototype “Harry Potter” story with a mix of the “Goosebumps” movie that also happened to star Jack Black. It’s a weird world of magic, mystical creatures and familial bonds that try to enchant the minds and eyes of young and old viewers alike; albeit with mixed results at best. “Clock” is constantly shifting between its highs and lows; unable to balance one side long enough to ignore or overpower the other for very long. Seeing another misunderstood weird kid get bullied and fit in with some fantastical other world is a dime a dozen story we’ve already read 50 times over. Lewis himself offers nothing especially new or interesting and every time we see him wallow miserably in the real world, we’re counting the minutes until he gets back to the far more interesting magical side of things.

Black and Blanchett make a surprisingly delightful pair. Their chemistry and snarky banter borders from adorable to hilarious, it’s a pairing I didn’t expect to work as well as it did and they had little trouble stealing every scene they were in. They stand out as charming characters and are welcomed guides on Lewis’s journey. The lore and story behind the clock and its villainous creator (a disappointingly subdued Kyle McLaughlin) are far more interesting than its actual execution. The special effects are also an uneven seesaw; shifting between decent to dreadful at the drop of a hat. It probably doesn’t help that this is very unfamiliar territory for hardcore gore horror director Eli Roth (Cabin Fever, Hostel) to cut his PG-rated teeth on.

Roth clearly has a visual and auditory flare for haunted horror fare and it plays off well with the unique presentation of the house and all its supernatural secrets. “Clock” does has a feel and a sound all its own and there are several key sequences that stand out as creative and memorable (the army of dolls and facing off against monstrous pumpkins). However, other times it produces the most insulting of baseline juvenile jokes that just make you shake your head in disgust; like a shrubbery griffin pooping on people or a disturbing sequence featuring Jack Black’s adult head on a baby-sized body. The film is too scary for young children and the humor is usually too stupid for its slightly older audience to stomach without having indigestion.

Overall, “House with a Clock in its walls” is enjoyable and decent enough for a solid watch but after that; the magic has pretty much run its course. There’s nothing extraordinarily bad here but there’s nothing truly great here either, it’s pretty average. The casting of Jack Black and Cate Blanchett was a perfect combination and the lore behind the clock and the villain’s motivation are applauded components, but the lead is a bore and so is his vanilla flavored school problems and background. It’s got a heart but the brain seems to check out every once in a while and it’s a shame because I wanted to like and enjoy this more than I actually did.