The Verdict On Hell Fest: Is It Worth Your Time And Money?? 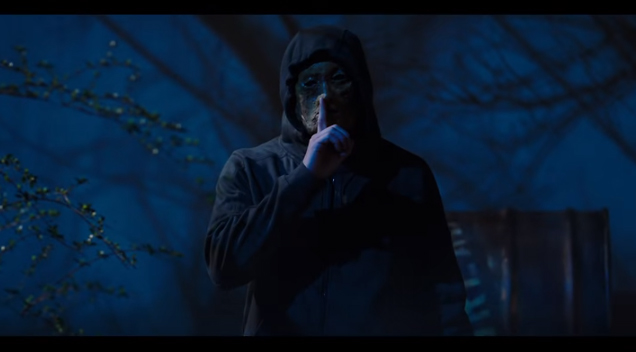 Sometimes when you go to see a movie, you don’t want your whole world to be rocked by something radical and new; sometimes you just want to get what you expected to get out of it. Halloween sparks the desires for costumes, candy and yes; horror movies as well. Every time October rolls around, I have a list of horror and/or Halloween related movies I got to see to get my horror fix; just like people do at Christmas time with holiday movies. “Hell Fest” is by no means a groundbreaking horror movie. It’s not especially violent, it doesn’t bring anything new to the table and it’s not even that scary or features any kills or stars that stand out…and yet it gave me exactly what I wanted out of a Halloween movie and that sometimes is all you need.

The title “Hell Fest” refers to a titular named horror amusement park where people pay to scared and horrified by every manner of monster and murderous demon the park can concoct. A group of friends (Reign Edwards, Amy Forsyth, Bex Taylor-Klaus, Christian James and Roby Attal) visit the park for a night of fright-filled fun; unfortunately, a real-life masked killer has entered the park and stalking them throughout the park disguised as one of the park’s costumed employees. Now bodies are dropping, and people are having a hard time telling what scares are part of the show and what real horrors await them in this Hellish amusement park.

The first and most sincere thing I can say about “Hell Fest” is what you see is what you get: this is a straight-up slasher flick, nothing more and nothing less. The whole gimmick here is the unique venue for the slaughter. The killer himself is not really iconic, creative or wields a signature weapon for outlandish kills; they don’t even give him a name. That being said, what makes “Hell Fest” enjoyable is the simplistic execution of its purpose: to be a Halloween slasher flick to get you in the ghostly spirit. I trivialized the theme park being used as a gimmick but to be fair, it’s a really damn good gimmick. The atmosphere and set design are bursting to the brim with imagination. There are all sorts of surprises, set pieces and concepts being utilized on a constant basis. You really feel like you’re in this park, feeling what the park goers are going through and believing this could actually be a real place you could go see.

The idea of a real killer sneaking into a horror park and using the theatrics to his murderous advantage makes it difficult at times to tell if this is a lone killer or if there are others in on it. I won’t spoil the truth mind you. This angle though is really subtle and effective enough that kept me invested and curious to see how this all played out. I can admit I didn’t really feel scared at any point and aside from one interesting little death scene involving a carnival game hammer, the deaths were pretty simple and relied more on misdirection than intense gore shock value. The cast did a fair job. They’re you’re typical disposable cannon fodder with no noteworthy quirks or backstories but never annoying or coming off as amateur quality.

The one exception to that generalization is Bex Taylor-Klaus. She truly owned her role and lived it to its fullest. She had an infectious energy that made her likable as well as memorable; she was that one character you actually stuck with and cared about if she lived or died and it’s clear she had run with the role, and that made it much easier to have fun alongside with her. The only other scene-stealer was horror veteran Tony Todd, and that’s not saying much considering the majority of his screen time was spent announcing park attractions and then one brief scene as a carnival barker setting up a staged show. I really felt he should have done more, even if only for a little while longer to make him feel like he’s more than just a simple cameo.

Overall, “Hell Fest” is a fairly run-of-the-mill horror/slasher movie that probably won’t be seen as much more than a dismissed Redbox title sitting down below on the kiosk’s display case. The cast is vanilla flavored, and it wastes Tony Todd’s talents, but some stars make the most of it, the atmosphere and gimmick prove to be entertaining enough, and I feel this movie knows how to do its job well enough to recommend you go see. It’s not the main band you came to see, but it’s the perfect opening act that will get you right in the Halloween mood for more.