The Verdict On Venom: Is It Worth Your Time And Money?? 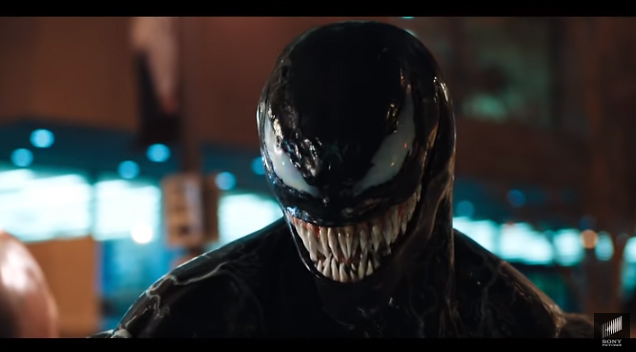 Though popular and iconic in the world of Spider-man comics, the character of Venom has never had a successful transition into the world of movies. After his disastrous appearance in the ill-fated finale to Sam Raimi’s Spider-man trilogy “Spider-man 3,” the character of Venom has never appeared or been referenced since and after Marvel finagled a deal with Sony to feature Spider-man in the MCU AND the fact Venom’s origins are so closely tied in with Spider-man, it was doubtful Venom would ever fit into the grand scheme of things. In a strange and risky move, Sony decided to make their own movie about Venom without having any connections, references or appearances by everyone’s friendly neighborhood Spider-man.

Our anti-hero’s story begins with Eddie Brock (Tom Hardy), a journalist who stirs one too many pots and gets himself fired after interrogating shifty CEO, Carlton Drake (Riz Ahmed), for sweeping dead homeless people he sept under the rug for his alien bonding experiments. He loses his job, his girlfriend Annie (Michelle Williams) and his credibility. Things changed when an alien creature called a “symbiote” escape Drake’s lab and bonds with Brock. The creature (calling itself Venom) needs Brock as a host and imbues him with incredible powers and a craving for human flesh. Now Brock and Venom must become one in order to survive Drake’s efforts to capture them and prevent further loss of life from the growing threat of the symbiotes.

As someone well versed with the history of the character, it was difficult to for me to see how a “Venom” movie could work without such an integral character such as Spider-man being involved. The result is it kind of works…and it also kind of doesn’t. “Venom” portrays the character less as a villain and more of a darkly comical anti-hero or “lethal protector” as some call him. Venom’s iconic spider-webs are replaced with black gooey extensions that serve as his primary weapons and the majority of the action sequences, one motorcycle chase scene, in particular, was especially marvelous to behold. As a whole, “Venom” works better than I thought it would and more often than it doesn’t but that’s not to say it proved all of my previous concerns and hesitations wrong; it didn’t.

“Venom” has an odd approach to violence. It boasts a darker side with more graphic deaths, language, and disturbing imagery, but it also juggles humor in surprising ways and they mostly land though they are largely due to the excellent physical timing and performance from Tom Hardy. He excels with his physical expressions; embodying the internal struggle between Brock and Venom, as well as balancing amusing exchanges between himself and himself (he also does the voice for Venom). Brock is painted more sympathetically here than the obvious jerk he is more accurately portrayed as in comics as well as by Topher Grace in “Spider-man 3.” The effects for Venom are quite impressive and create for some distinct and memorable visual components.

The supporting cast is there but not very memorable and those who should be, like our film’s villain, fail and fumble to create a compelling foil for our head biting hero. Riz Ahmed feels like a slightly villainous Steve Jobs and his motives are as run-of-the-mill as you can possibly get. His final fight with Brock at times is visually striking, but other times, it’s a garbled, goopy mess and doesn’t live up to the big bang money shots featured earlier. The humor also doesn’t always work and the PG-13 rating leaves some visual head scratching as the film feels like it could go darker, could go more violent but just doesn’t and almost makes the film feel like “Venom” was holding back when this character is being portrayed as doing anything but.

Overall, “Venom” is a far more effective first swing into the world of Spider-man comics than the abominable “Amazing Spider-man” movies Sony foolishly tried to make work. “Venom” features an amazing lead, striking effects and a uniquely comedic approach to such a dark and villainous role. Unfortunately, the villains lack any bite or brains or believability, the supporting cast fails to stand out, and neither the character nor the film ever goes far as it actually could. I’ll gladly see a sequel, but “Venom” has a good long way to go before he reaches Spiderman’s “Homecoming” level.