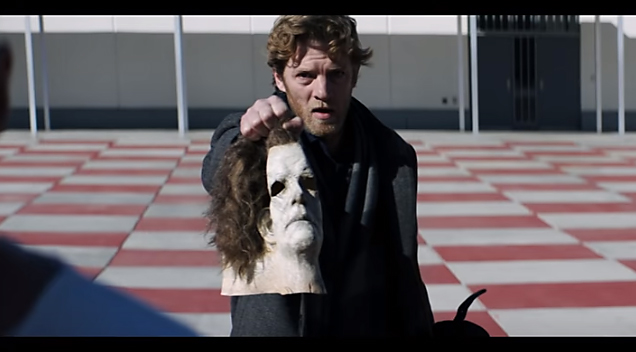 Though horror icons such as Freddy, Jason and Chucky, and their slasher film series have become ancient relics of a blood-soaked past; there are always fans out there with wads of cash and ambitious talent who wish to bring back a classic character to life. Michael Myers original “Halloween” films is seen as one of the best horror films that still holds up to this day and after numerous sequels and a few reboots here and there, director David Gordon Green and original “Halloween” star Jaimie Lee Curtis have brought the horror of Michael Myers back for a semi-fresh take on the masked killer by ignoring ALL sequels and reboot films and connecting directly to the canon of the very first “Halloween” film.

Taking place 40 years after Michael was shot out of Laurie’s window; a documentary crew goes to see Michael who has been imprisoned in a mental institution ever since he was captured. Laurie (Jaime Lee Curtis) believes Michael will break free one day and has been training and arming herself over the past 4 decades so that when Michael does escape; she can kill him once and for all. While her family thinks Laurie’s too damaged to live a normal life, things become bloody and brutal when Michael escapes and returns to Haddonfield, Illinois in order to finish the job he started so long ago and meet Laurie for their final showdown.

I’ve never been a big fan of the “Halloween” series, even the first one I consider to be “good” at best; I don’t see it as a masterpiece. I’ve seen a total of 6 films in his franchise (this one included) and their quality is 50/50. This new “Halloween” tries to go back to basics with Michael and remind us he is a beastly, cold-blooded, inhuman monster that does nothing but kill and in that regard; it never fails. Michael is a merciless killing machine, the majority of the film is just him walking into whatever house or building he wants and slaughtering everyone in his path in dark, brutal ways. I applaud bringing him back to his true form and putting the darkness he once had before he was sullied and soiled by numerous sequels that grew increasingly off course.

I was supremely pleased to see Jaimie Lee Curtis back and while she has aged, she hasn’t lost a speck of that fire and determination her character is immortalized for. She’s a badass; hardened and hardcore and her final showdown with Michael doesn’t disappoint for a moment and neither does her performance. Judy Greer is a welcomed new addition to the cast and is easily the most impressive standout besides Curtis. Andi Matichak as Alyson feels like a dime a dozen young actress who happens to be in a horror movie. While she’s not bad per se, she’s also no Jaimie Lee Curtis either. Unfortunately, the problem with the cast only grows from there and it ends up becoming more noticeable as the film progresses.

Will Patton feels wasted here, Haluk Bilginer is a very weird “new Dr. Loomis” (and ties into my biggest problem with the film but can’t say for the sake of spoilers) and everyone else is either too stupid or too forgettable to register on our radars. The gravitas and thematic elements of the “Halloween” films (especially this and the first) have always given the impression these films were a high breed of class of quality horror films that avoided the trappings and clichés of previous horror film series (like Friday the 13th). However, the new “Halloween” film makes it painfully obvious that is going to meet a gruesome end and barely bothers to scrape together any kind of believable or recognizable personality for any of the other characters.

People do stupid things; warranting the annoying but obligatorily expected angry complaints towards horror movie victims and I was really hoping this film was going to be better than that…but it wasn’t. I feel like verbalizing what the first “Halloween” movie would say to this new one if it could talk: I’m not mad I’m just disappointed. Overall, the new “Halloween” movie is admittedly a huge improvement over its multiple sequels and reboots and brings terror and darkness back to a character that feels more in his proper place than he has in a long time.

I’m still raw over changing the fact Michael is not Laurie’s brother anymore (makes his motivations rather meaningless now really), but for what it tried to do and what it changed, this could have gone a lot worse and I think this is a fresh take that manages to really capture the macabre magic the other installments were missing and definitely enjoyed this revival of a worn out character.