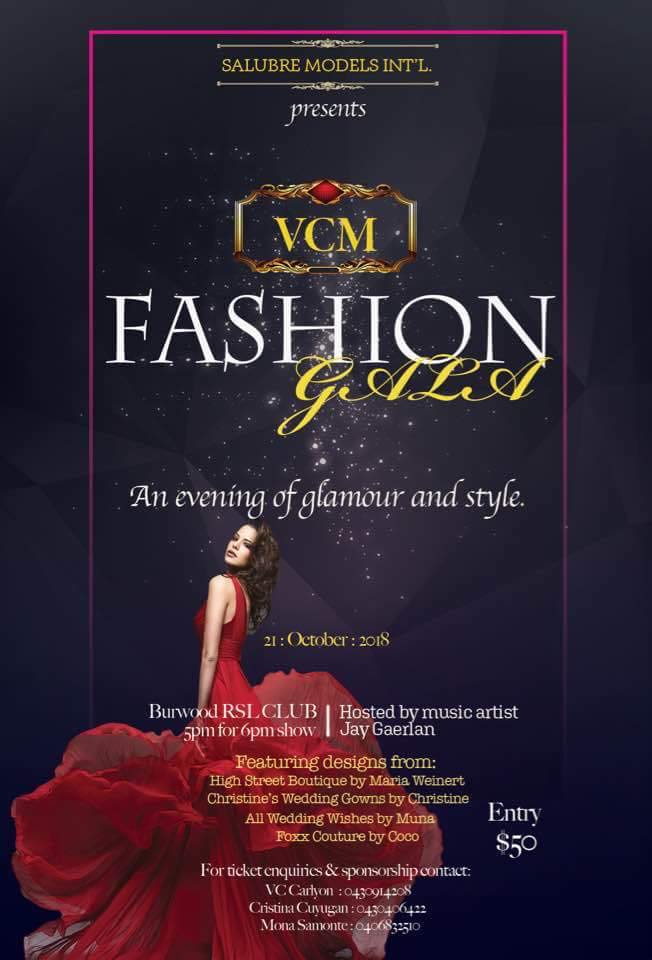 Glamour and style were in full fruition on the 21st October 2018 at the VMC Fashion Gala at Burwood RSL Club. The event featured six designers—High Street Boutique by Maria Weinhart, Christine’s Wedding Gowns by Christine, All Wedding Wishes by Muna, Foxx Couture by Coco and Joyce to the World. The fashion show was the manifestation of passion for fashion of three women—VC Carlyon, Cristina Cuyugan, and Mona Samonte who have always dreamed of creating their platform for local boutique fashion designers and jewelers to showcase their latest designs and creativity.

Hosted by the Jay Gaerlan who brought his infectious charisma and his brilliant singing chops kick off the event, entertaining the audience. Joyce to the World was up first and they showcased their latest rhinestone-studded jewelry, which has been intricately cut and meticulously beaded through a chain. As the models strutted out with all black outfit consisted of a black singlet and high-waisted jeans, they showcased each necklace on their décolletage with justice and each jewelry in all its glory. Joyce to the World jewelry has a touch of a new element, which has a refreshing take to piece and can be worn in just about any special occasion.

Coco Fox from Foxx Couture entered the runway with their eclectic range of dresses, swimwear, as well as other outfits. The collection had an abundance of sequins, metallic, fish scale fabrics and asymmetrical hemlines, leaving the audience gobsmacked. While there were three more designers to go, there was an exceptional performance by Christopher Booth, and Trinity Young serenaded everyone with their melodious voices, singing operatic ballads and favourite tunes.

JSOO is a boutique jewelry brand that specializes in Korean-inspired dainty trinkets and Melbourne Cup-esque straw hats. Again, the models as majestic as they are, strutted along centre stage with a pacing momentum. Kids were also encouraged to strut their stuff on the catwalk, and JSOO provided the Disney princess experience with her dainty trinkets.

Designs from Maria Weinhart parlayed the runway next which exuded High Street aesthetic. Full-fledged out wedding dresses bodied the podium, and glittering jewelry shone iridescently in showroom lighting. Again, another round of mini Disney princesses’ showcased flower girl dresses. They pranced enthusiastically along the podium, leaving the audience in awe as they pivot toward the backstage.

The last performance of the night was a Filipino Hip-Hop dance duo who gave a mesmerizing dance routine. It was meticulous and well-choreographed and was in synchronization to the old Hip Hop beats. It served as a happy intermission to a rather serious yet glamourous runway.

As the night came to close, the sparkle, the glamour came to a close. Months of blood, sweat, and tears that were poured on a dream has now become a reality and finally, VC, Christine, and Mona looked towards the crowd to crown the best dressed and they awarded a woman of opulent and sophisticated taste in Melbourne Cup fashion with an amazing oversized hat. The winner walked down the runaway to celebrate her award. StarCentral would like to congratulate VCM on the success of this beautiful event.