Brace Yourselves, Australia: Made In The West Film Festival Is About To Hit Sydney Tomorrow! 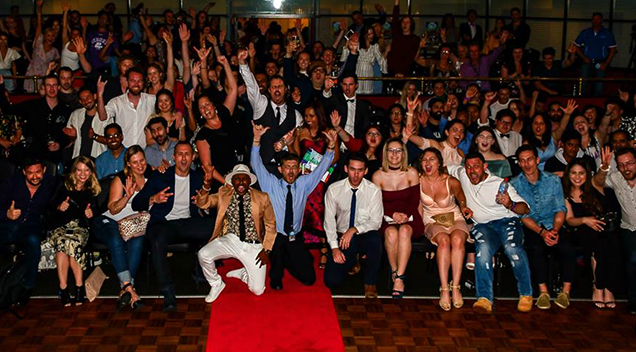 We’re only one sleep away from this year’s Made in the West film festival, are you ready to find out the best in the West??

Made in the West is on tomorrow, 24 November at Event Cinemas Liverpool. Doors open at 6 pm.

This year’s line-up is fantastic so you’re in for a real treat this year. Here’s what you need need to know:

GETTING THERE IS EASY

Event Cinemas is located on the top floor of Westfield Shopping Centre, on Elizabeth Drive in Liverpool. We recommend taking public transport, though there is also parking available in the Westfield car park.

The festival will take place in Cinema 12 and the red carpet photographers will be ready for your arrival in the upstairs foyer. They have the whole space roped off just for their festival guests.

Made in the West is rolling out the red carpet for Western Sydney filmmakers and you’ll be celebrating alongside them! Dress to impress because you’re sure to get snapped by their festival photographers throughout the night.

Don’t forget to invite your cast and crew to take photos in front of their media wall during the intermissions and they’ll share the pictures with you after the event. Keep an eye out for the red carpet TV crew as they’ll be interviewing festival finalists during the breaks.

SETTLE IN FOR A NIGHT AT THE CINEMA

Made in the West is screening 14 films on the night in two segments, with a half-hour intermission between — the entire festival screening including trailers for local feature films will take about 3 hours. At the end of each segment, they will announce the individual category awards for Best Director, Screenplay, Cinematographer, Editor, Sound Design, Original Score, Actor, and Actress.

VOTE FOR YOUR FAVOURITE FILM

After all, films have finished screening they will hold a live audience vote so YOU can nominate your favorites! They’ll have programs and voting cards ready for you (don’t lose them!) and they’ll hand out pens when it’s time to select your top three films. They count the votes during the final intermission and then send someone home with a beautiful crystal trophy.

If you’ve been named one of the 2018 finalists, you’re in the running to win! Independent filmmakers will compete for the title of Best in the West, a prestigious award recognizing the top talent from Western Sydney each year as voted for by a panel of judges. Student filmmakers will compete for the Best Student Film Award and, of course, there’s the highly coveted Audience Choice Award, as voted by YOU on the night.

This year Made in the West has some amazing prizes to give away thanks to their wonderful sponsors! They’ve secured over $15,000 in equipment rental and studio hire, DOP packages for your next project, consultations and mentorships with industry experts, actor’s headshot photo packages and best of all, an invitation to join them on Made in the West TV — so many great things to get you started on a productive year of filmmaking in 2019! Good luck to all of the nominees.