StarCentral Magazine’s One On One Interview With The Legendary George St. Pierre 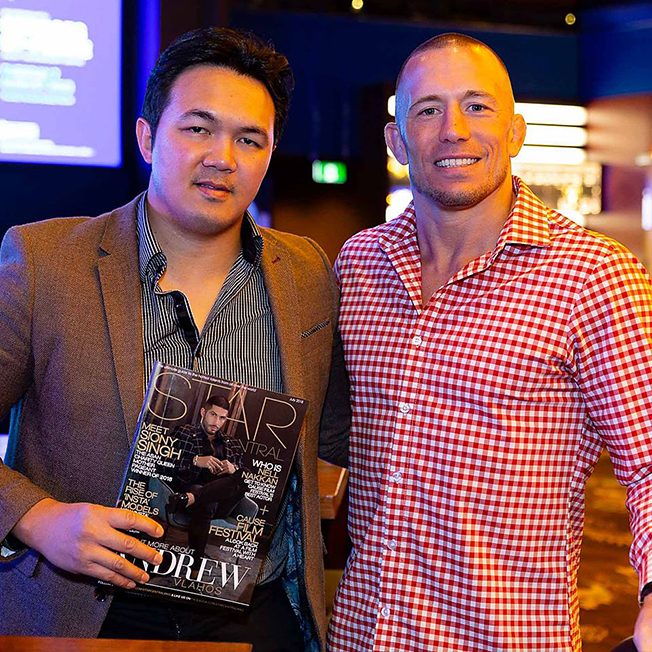 Ask any avid fan of the UFC who is the Greatest of All-time and they will probably tell you its George St. Pierre aka “GSP”. He is a fighting spirit, personified and notorious for his champion status. A three-time former UFC Welterweight Champion who won the title twice and the interim title once between November 2006 and April 2008. Since December 13 2013, he held the longest record for most wins in title bouts and the second longest for “combined title streak” in the UFC history. Despite his track record in the UFC, he’s a soft-spoken, level-headed intellect who happens to have an unparalleled love for dinosaurs. The G.O.A.T that is George St. Pierre was on an Australian speaking tour, talking about the hits and misses of his career, motivating and inspiring Down Under UFC fans in Sydney.

StarCentral magazine was lucky enough to meet with him and sat down for an exclusive interview and here’s what went down:

StarCentral: Tell us about your journey. What’s the secret to your success?

GSP: When you do something, you need to have fun and have a positive attitude, the best part of you needs to come out. Of course, there will always be times when things become stressful because there is no perfect job. However, 99.9% of the time, I’m just having fun and not regretting a single moment of it.

StarCentral: Were there times when you felt that you weren’t going to make it”?

StarCentral: Have you ever been afraid of failure?

GSP: For me, I want to live likes it’s my last day on Planet Earth. I don’t want to have any regrets. I’m not afraid of failure, I’m not hoping to fail, but I am prepared to fail. If I fail since I’ll just come back stronger next time. Failure is part of life. Failure is the greatest teacher.

StarCentral: Let’s talk about success, when did you feel that you’ve reached the pinnacle of your success?

GSP: I haven’t reached it [the pinnacle of my success], I think I have reached the point where I have achieved the greatest achievement that I can ever achieve, but I think I can still surpass that. There’s always room for improvement.

StarCentral: Who would you want to fight that you think can be the biggest fight of your career?

GSP: Right now, I’m not ready to go yet but maybe, in a few months time, I would be. I don’t know what the UFC landscape is going to be in a few months time, because you can never predict what will happen. Did you see what happened to Demetrious Johnson? He was known as the best—probably the best of all time. I was on the plane when I turned on my cell phone and got the text message about him losing – I was like “Wow that was unexpected.”

StarCentral: Finally, if there were no rules for one day and you can do anything outrageous, what would you do?

GSP: I would probably like to control people’s minds – to control the thoughts of living things and be the master of the universe. [Laughs]