The Verdict On “Spider-man: Into The Spider-Verse:” Is It Worth Your Time And Money?? 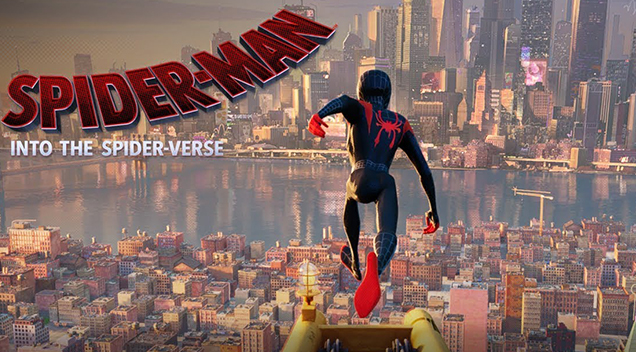 Spider-man is one of those everlasting superhero characters that can appeal to anyone, anytime in any day and age because he feels and acts like the everyday guy given superpowers who is just trying to keep his life put together and we can all identify with that struggle. Peter Parker is the everyday person the late great Stan Lee knew we could all relate to. But what about the lesser known Spider-men and Spider-women of Marvel comics, how does one incorporate alternate reality versions of the web-slinger without tripping over the toes of Marvel’s cinematic incarnation? Simple, you create a one of a kind animated movie experience and call it “Into the Spider-Verse.”

Miles Morales (Shameik Moore) is an awkward, bumbling; easily embarrassed teenager who just happens to be destined to become Spider-man. He learns this the hard way when 5 other alternate reality versions of Spider-man including Peter B. Parker (Jake Johnson), Spider-Gwen (Hailee Stanfield) and Spider-man Noir (Nicolas Cage) end up crashing into Miles world thanks to some reality manipulation from the crime boss Kingpin (Liev Schreiber). Now Miles has to whip this team into shape and come to grips with his own unique powers and role as a future Spider-man and prevent all of reality from tearing itself apart and ending the lives of everyone in every universe.

I’ve heard of Miles Morales in the comics before but never saw why the character was such a big deal or how he was so likable. After seeing this film, I have to admit, I’m starting to appreciate the creativity alternate versions of superheroes can provide. “Into Spider-Verse” feels like a living, breathing, ink and paper in motion comic book; pulling out all the stops and using its unique vivid imagination and colorful flares to tell a story that is informative, relatable, exciting and introduces a variety of new characters that casual and experienced comic/Spider-man fans can absorb with minimal difficulty or confusion. This is an idea that could never fly in a live action film and the effort being put into the hilariously creative narrative and story compilation brings it to life in a way only a quality animated film like this could deliver.

I loved the contrast between Miles inspirational first meeting with Spider-man, to the absurdly lazy and lackadaisical second Spider-man he ends up working under. Miles story and performance doesn’t feel like another Peter Parker copy, he feels like his own kid with his own world, own issues and keeping his transformation on the backburner on the climax wisely gives the audience enough time to get to know him and enjoy the other Spider-cast in their full glory before putting on the mask himself. The unusual casting with Nic Cage as Spider-man Noir and John Mulaney as Spider-ham elevate the humor and wackiness to new levels of entertainment.

The speedy pacing and upbeat vibe with the music and color coordination with all the fight scenes and emotional movements kept this movie moving but never without emotion or purpose. Everything felt like it had chemistry, an artistic flow that felt like a natural part of this universe and it was a refreshing take on a well-known origin story. My only criticism would be that Miles himself doesn’t exactly live up to the hype that was built around him (both by the fans and the movie itself). There’s this feeling that he is going to be the role that everyone will adore and get behind and that seeing him on the big screen as a Spider-man incarnation is a big accomplishment, a big deal we are supposed to acknowledge…but I just don’t see it.

Miles is by no means a weak, disappointing or poorly written character, but I just don’t feel he ever truly encapsulated the hype and intensity his role was supposed to invoke. Overall, “Spider-man: Into the Spider-verse” was a brilliant leap into experimental territory for the web-slinger. The cast is electrifying with life, color, energy, and variety; it’s an easy ride that anyone can get on board and enjoy without being longtime fans. The comic book style animation is wonderful to admire and watch; as is the rest of this film. Here’s hoping we get more successful creative ventures like this one for our beloved Marvel characters in the future.