The Verdict On “Glass:” Is It Worth Your Time And Money?? 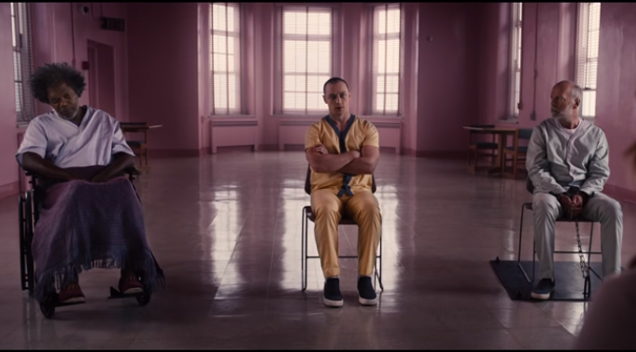 Back in 2000, M. Night Shyamalan released a little-known film called “Unbreakable” starring Bruce Willis and Samuel L. Jackson; dealing with a realistically grounded portrayal of super-powered people. That film was quickly overshadowed by his previous film “The 6th Sense” and his following one “Signs.” After a series of bombs, Shyamalan became an unfunny joke no one wanted any part of anymore. That all changed in 2016 when Shyamalan got back in the public’s good graces with James McAvoy in “Split” AND revealed that (at the very end) “Split” is a sequel/connecting film to the same universe established in 2000’s “Unbreakable.”

2 years later and the final culminating film in this surprisingly connected universe comes out in the form of “Glass.” With Kevin Wendell Crumb and his multiple identities still on the loose abducting women (James McAvoy), self-appointed hero David Dunn (Bruce Willis) plans to stop him before any more lives are lost. Unfortunately, both end up getting caught and taken to a special mental health facility along with previously incarcerated villain mastermind Elijah Price/Mr. Glass (Samuel L. Jackson) to have their “superhero conditions” cured by Dr. Ellie Staple (Sarah Paulson). Now questioning their superhuman abilities, David and Kevin struggle to find out who they really are while Mr. Glass forms a plan that will change everyone’s lives.

This is the first time that I can proudly say that we have a Shyamalan film WITHOUT any of the weird, awkwardly annoying Shyamalan trademarks that have crippled the last handful of films he has disgracefully directed. “Glass” feels like the true story topper on a cake that has been built over the past 20 years, and if anything, age has actually improved the quality of the story right when we needed it to. The characters from “Split” and “Unbreakable” tie perfectly together in this narrative. Everyone’s major events, family backstories and relatives/friends are brought together, making every character and component feel like a necessary part to a much bigger puzzle AND it allows those unfamiliar with the past films to catch a condensed recap.

People often say Christopher Nolan’s “Dark Knight Trilogy” is the most grounded piece of superhero film work but I say “Glass” is far more grounded and successful in making you believe such powerful figures could exist in our world without it feeling or coming off as too fantastical. The use of a psychiatric hospital specifically designed to handle each character allowed for some amazing in-depth character growths; breaking down everyone’s walls, pains, pasts and beliefs and forcing them to look at their own reality and what they are really capable of doing. The use of side/supporting characters from past films maintained a sense of familial connections.

James McAvoy is just as incredibly talented here as he was in “Split.” While he has to share the spotlight more, and thus; don’t get to show off all his chameleon changes into multiple personalities, he makes Kevin/The Beast more human and physically involved than ever before. Personally, I felt Bruce Willis was a bit more watered down (pun intended) than in “Unbreakable” but I adored seeing him face to face with Jackson again and seeing his physical feats at the end against McAvoy was a true delight. Jackson truly stole the show this time, figuratively and literally. He settles back into his 20-year-old character like no time has passed at all. He doesn’t even speak for the first hour of the film; staring ominously from his chair and making everyone in and outside of the movie wonder about his true motives.

Overall, “Glass” is the perfect finale for Shyamalan’s trio of modern superhero films; managing fantasy and reality in a way that neither “Unbreakable” or “Split” could do on their own or together. Bringing together all the original actors for their characters expanded the story and tied everything together in a beautifully and compelling way. While Willis was average as opposed to great, there were no real disappointing performances here with McAvoy and Jackson leading the parade. I finally have to tip my hat to Shyamalan for breaking his cycle and creating one of his absolute best and well put together films to date and here’s hoping more are on the way.