The 2019 Lakme Australia Fashion Show is just two months away and here are the first wave of showcasing artists who will be performing on May 25th, 2019. 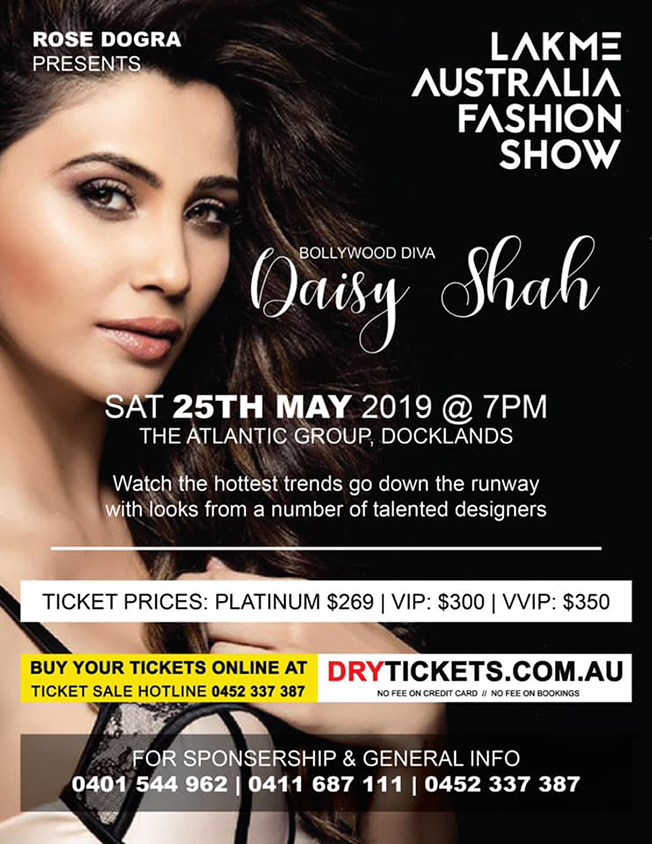 Daisy Shah is an Indian model, dancer and film actress. She has worked as an assistant to choreographer Ganesh Acharya and has appeared in numerous Bollywood hits.

Daisy Shah is a Gujarati with a Catholic name as her dad was raised is Sion among Catholics. She considers herself the boy in the family and is emotional, sensitive and responsible. She has been constantly working ever since she dropped out of college. Her being good-hearted might be one of the good reasons why Salman Khan handpicked her for his movies. 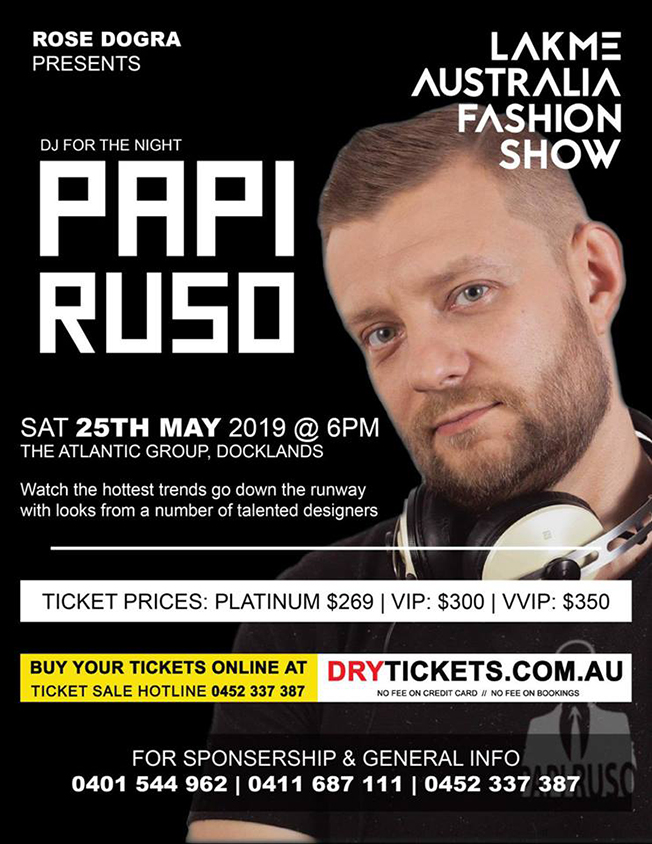 Papi Ruso is an Australian based street latin DJ.

He is the resident DJ at Bachata Corazon, the biggest bachata social in Melbourne, Australia. He is also a common guest DJ at just about every social event in town such as Bachata Indecente, Versus, Bachata Republiq, Bachata Beats, Latin Beats, Bembosa, 24/7, Bachata Connexion, Latin Sundays and many more.

He also played overseas at Hong Kong Sensual Bachata and Kizomba Festival, Singapore Latin Extravaganza, Formosa Salsa Festival in Taiwan and Thailand International Latin Festival, France and Croatia, Vietnam and Malaysia, Spain and Sweden where he gets the crowd going till morning and organizers are rushing to book him for future events.

He produces remixes for the local and international artists as well as remixes for public socials and his tracks are loved by thousands of Bachata lovers. 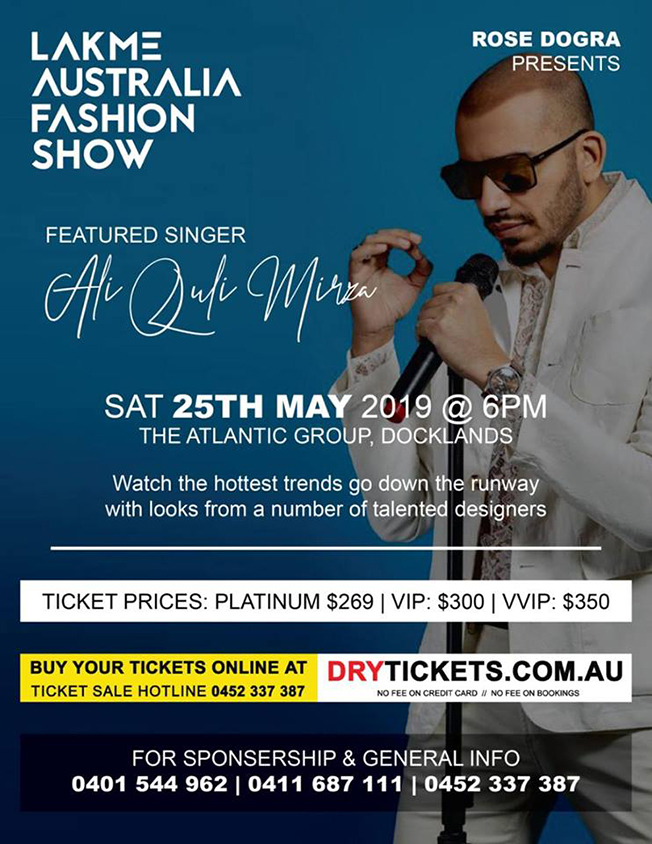 Ali Quli Mirza is a Mumbai based actor, singer, and composer, he is of mixed Indian and Mughal descent. His recent works include a song in a very popular film called Padmavati. He appeared as a contestant on the Indian reality television show Bigg Boss 8.

Previously, Mirza landed good roles in films such as Jail and New York. In 2014, he made his Bollywood debut in Roar: Tiger Of The Sundarbans, directed by Kamal Sadana.

Mirza also sang the song “Bore Bore Hum” in the movie Bluffmaster and his super hit song “club pub” made a mark in India and Bollywood. 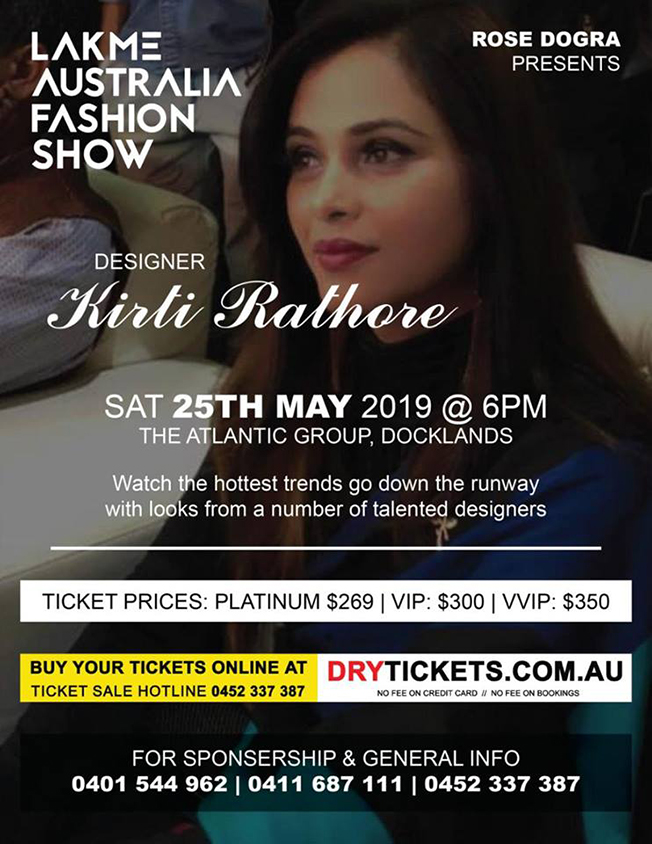 Kirti Rathore is an actress, model, and a very talented designer. A multifaceted woman with a dream to succeed, Kirti has always been far from the influence of her blue-blooded background. Blessed with exceptional talent, she dared to dream and broke the conventional expectations of a traditional Indian household.

In 2007, with a second-hand machine and one tailor, Kirti made a humble beginning. An old machine with fresh ideas created wonders and brought her back to the glittering world of fashion. Today Kirti has 3 prestigious fashion shows under her belt. She designs for various celebrities in Bollywood and television. She has recently been engaged to design an outfit for her childhood hero, Mr. Amitabh Bachchan to be worn by him in one of the programs.

This talented artist will be performing during the fashion show and Show’s afterparty and we have no doubt that he will leave the Melbourne audience mesmerized. Book your tickets now before it gets sold out by clicking this link: www.drytickets.com.au