The Verdict On Captain Marvel: Is It Worth Your Time And Money?? 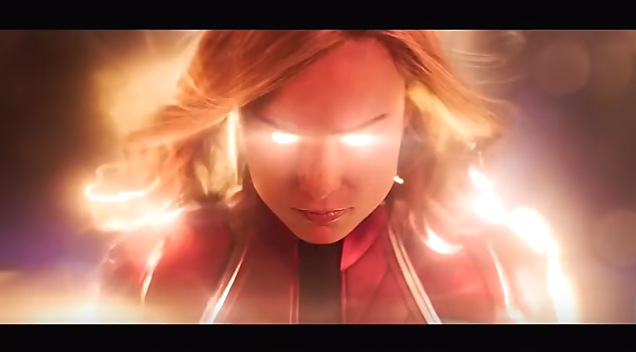 For all the shade DC threw at Marvel for taking this long to pump out its first solo female superhero movie, I feel the wait was well worth it; even more so than experiencing “Wonder Woman.” Having excelled at so many other major landmarks in previous films, Marvel had a lot of talk to back up to make for the fact it took them this long for a solo female hero movie when Black Widow is just NOW getting one started. Add in the 1990’s unique setting and digitally de-aged Samuel Jackson and Clark Gregg and “Captain Marvel” creates an interesting combination that will hopefully wow women and young girls everywhere the same way “Wonder Woman” did earlier.

Air force pilot Carol Danvers (Brie Larson) has no memory of her Earthbound days and spent most of her life training on an alien world with a race called the Kree; trained by Commander Yon-Rogg (Jude Law) to hunt down shapeshifting aliens called Skrulls (Ben Mendelsohn) who have infiltrated Earth in search of something dangerous and hidden. As Marvel lands on Earth during the 1990’s era, she meets a young SHIELD agent named Nick Fury (Samuel Jackson) and slowly starts to unravel the truth about her past and learning who the real heroes and villains are.

With a new superhero comes a new origin story, the two most dreaded words any comic book fan is familiar with (besides DC movie). “Captain Marvel” flips the origin concept on its head, literally and tells the story in pieces; making it difficult for both Marvel and the viewers to figure it all out, which is actually a good thing. The story relies less on action sequences and more on genuine character development; learning in different narratives that create mystery and compelling drives that motivate Marvel, Fury, the villains, the good guys and everyone else to try and put the pieces in an understandable way.

Larson starts off being cold, rigid and a born and bred soldier with little humor or personality, but that was intentional as her growth and expanding warmth and learning about her history help us see who she really is and what kind of a person we hoped she would turn out to be. She is snarky but not overly comically so; she’s a badass but still shows room for improvement in trusting others and being a warm-hearted person. Larson is a comedy master as seen in previous movies, but this hard edge, straight-laced warrior visage ignores any over sexualized tropes and clichés and just makes her a hardcore hero without any of the trappings.

Seeing a young Nick Fury was a delightful surprise in every sense of the word: his CGI facelift looks amazing, his gruff-tough exterior is replaced by a sunny smart ass who isn’t afraid to be the comedic sidekick in the face of danger. Mendelsohn is everyone’s favorite go-to villain guy and he doesn’t disappoint here as the Skrull leader, in fact, he’s even funnier than Jackson is at times. I can’t say too much for fear of spoilers but I will say Mendelsohn has a dry wit and sarcastic demeanor about him that makes his role in the film all the more interesting. The 90’s soundtrack was a great blast from the past and I feel it blends perfectly with the overall spirit and identity Marvel and this movie are aiming for.

The one chink in “Marvel’s” armor though falls with underutilizing of some of its stellar cast mates. Jude Law is onscreen enough but never grows past his normal boundaries, Annette Benning holds significant weight but lacks proper exploration and everyone’s favorite hammer swinging big bad from “Guardians of the Galaxy” (Ronan played by Lee Pace) is treated as nothing more than a blink and you’ll miss it cameo, which sucks because many people (myself included) were looking forward to seeing the character get some expansion.

Overall, “Captain Marvel” is a fun, action-packed, well-acted explosion of 90’s female superpowered goodness that thankfully avoids being overly gender preachy and allows Marvel to be a likable badass without having to send a specific message or be sexualized into some sort of joke. Aside from some underutilized performers/performances, “Captain Marvel” is the female superhero everyone has REALLY been waiting for…myself included.