The Verdict On Dumbo: Is It Worth Your Time And Money?? 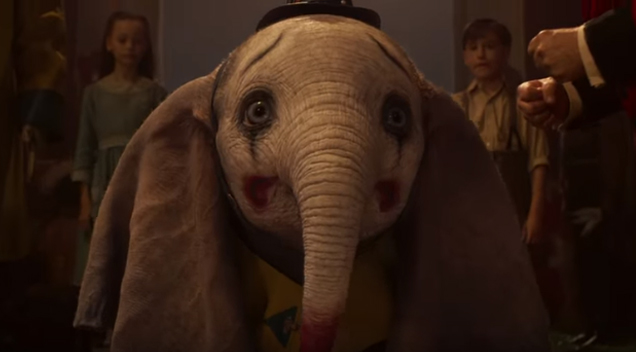 If it’s not broke then don’t fix it…even if everyone WANTS it to be broke at this point. Disney keeps on striking gold with its latest formula: remaking Disney classic cartoon movies into live-action blockbusters. It’s a smart business plan that requires very little effort and just relies on flashy effects and nostalgia to do most of the work since most fans already know the story their seeing anyway. While bigger name classics have much more to live up to (Aladdin, Lion King), lesser-known and less successful Disney titles are actually a great fit for this remake formula, which brings us to today’s feature: Tim Burton’s “Dumbo.”

When a circus performer (Colin Farrell) comes back from war less of a man than he was before, he finds his family (circus and literal) are suffering under a failing big top run poorly by ringmaster Max Medici (Danny Devito). Their luck changes when their star elephant gives birth to a baby with abnormally large ears, who quickly becomes their star attraction with his ability to fly. Once entrepreneur V. A. Vandevere (Michael Keaton) and star acrobat Colette Marchant (Eva Green) get their hands on Dumbo, they soon learn the value of family and how important this elephant is to fans of all ages.

“Dumbo” never struck a big chord with me as a child. It was too short, too depressing and too blah to really make me a lifelong fan. I was curious and hopeful this remake could turn that around and bring a side out of “Dumbo” that had never been done before, and they did…and it still kind of didn’t work though. Unlike the cartoon original, the live-action “Dumbo” focuses exclusively on the human characters and gears away from cutesy talking animals. In fact, at times Dumbo himself feels more like a plot device than an actual character. His design is unmistakably adorable and cute to look at, but the lack of a personality and focus takes away most of the magic associated with the iconic character.

Luckily, the cast is a great assortment of talented Tim Burton veterans such as Eva Green, Danny Devito, Michael Keaton and some new ones like Colin Farrell. Green and Farrell are the real standouts in this film. Farrell doesn’t have much of a character to work with, but it’s evident he’s still giving it his all and his western accent actually works very well here. Green is charming, delightful and a visual wonder in “Dumbo.” Her use of acrobatics and flying sequences with Dumbo himself are beautiful and prove the flying CGI elephant can be beautiful as well as cute and squeaky.

Danny DeVito is a name everyone should know and remember, but I wouldn’t say this was his best but neither would I say this was his worst work either. He’s just basically himself and does his job well but never enough you notice him or remember him especially. The same cannot be said for Michael Keaton, which is a shame because I did NOT want to remember or notice him. Keaton’s been Batman with Burton for two movies a lifetime ago, you’d think that would give them a better sense of understanding how to make magic happen again but clearly not. Keaton is like an early 90’s Saturday morning cartoon villain: obvious, predictable and silly.

This is supposed to be the live-action incarnation and yet he comes off as more of a cartoon than anyone in the original film. “Dumbo” relies heavily on family warmth, lovely visuals and a much happier ending than the original film, but beyond that, it’s still just an okay movie from start to finish. “Dumbo” suffers the same problem every live-action Disney movie makes: they don’t try hard enough. The writers and director get lazy and let the previous story speak for itself; failing to make any new innovations to the material or give a crap enough to try and make the story feel livelier with more than just live-action actors and effects.

Overall, “Dumbo” is as run of the mill as you get. There’s nothing wonderful or magical here, just a faded Disney character running on fumes and as large budget; driving on a road we’ve already been down before and didn’t care much for the first time we went down it. It’s cute for kids and maybe some adults but it won’t go past that and you probably won’t like the pros enough to ignore the cons of it to warrant a second viewing.